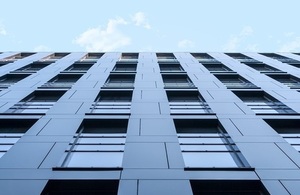 Having issued a ban on combustible materials on new high-rise homes, the Ministry of Housing, Communities and Local Government has established the Building Safety Programme to offer advice.

The advice focuses on where the ban comes in to play -  on the external walls of new buildings over 18 metres containing flats, as well as new hospitals, residential care premises, dormitories in boarding schools and student accommodation over 18 metres. Hotels are also included in the scope.

The Communities Secretary is also taking action to speed up the replacement of unsafe ACM cladding, such as the type used on Grenfell Tower.

Local authorities will get backing, including financial support if necessary, to enable them to carry out emergency work on affected private residential buildings with unsafe ACM cladding. They will recover the costs from building owners. The government is already fully funding the replacement of unsafe ACM cladding on social sector buildings above 18 metres.

Regulations were put in place on November 29 which will give legal effect to the combustible materials ban announced in the summer.

Secretary of State for Communities, James Brokenshire MP said: “Everyone has a right to feel safe in their homes and I have repeatedly made clear that building owners and developers must replace dangerous ACM cladding. And the costs must not be passed on to leaseholders. My message is clear – private building owners must pay for this work now or they should expect to pay more later.”

The government appointed an expert panel to provide advice to the Secretary of State for Communities and Local Government, on building safety measures following the Grenfell Tower fire.

The panel have experience in fire and building safety, including testing processes and are drawing in wider technical expertise as necessary to inform councils and other building owners of actions they should take in relation to other buildings, those with materials other than Aluminium Composite Material. The expert panel will consider these issues after the systems tests are addressed.

The government is undertaking an investigation into the fire door industry following concerns about the consistency of flat front entrance fire doors against the required performance standards.

Where doors that have failed tests are installed, building owners should speak to the contractor responsible for installation or the supplier that produces the doors to get further information about the nature of failure and potential action required. They should also review their building fire risk assessments to determine how quickly these doors should be replaced.

As soon as doors fail a government-commissioned safety test, the supplier is informed and asked to remove the product from the market. The company should then investigate the reason for the failure to understand what action they need to take to remedy the problem.

In parallel, the government will inform National Trading Standards who will ensure local investigations are carried out to determine if and when the fire door concerned can return to market. They will also inspect the supplier’s operations and commission further investigations into other fire doors produced by the supplier as appropriate.

The government’s independent expert panel and the National Fire Chiefs Council has clarified that while the risk to public safety remains low, those buildings affected by this issue should review their fire risk assessment to consider this new information and determine how quickly affected doors should be replaced.

Picture: Combustible cladding on new high rise homes and other selected categories of building is banned.

Kirk Smith of Allegion UK discusses fire door neglect and how to spot the potential faults that could be compromising your fire safety procedures. Kirk Smith is...