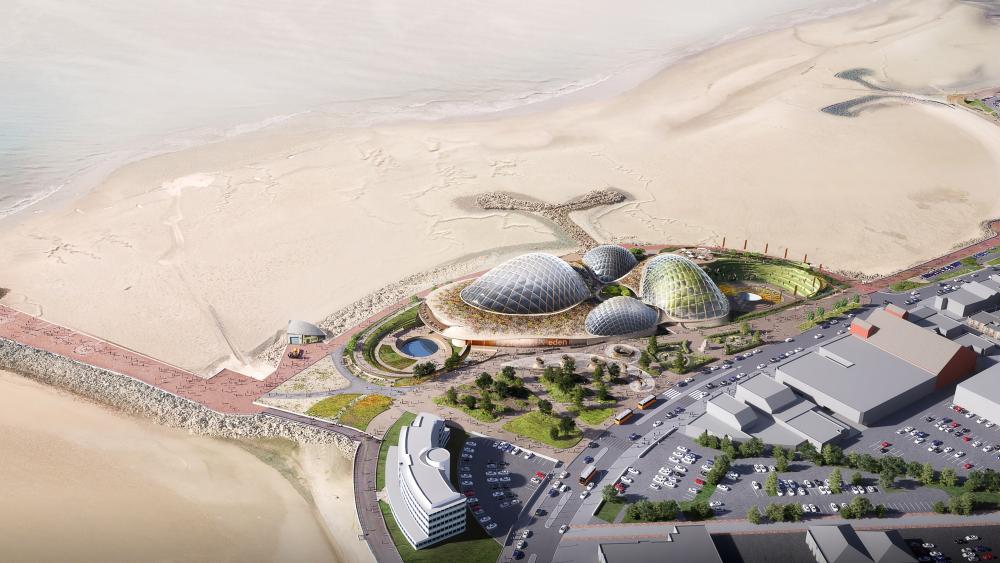 Planning permission for Eden Project North in Morecambe, a £125 million project, has been granted by Lancaster City Council.

The latest milestone for the Morecambe project comes following years of development and extensive community consultation, leading to the submission of the planning application in September 2021.

With planning permission granted, securing funding for Eden Project North is now the major focus.  Eden has submitted a business case to the UK Government, asking for a £70 million public investment in the £125 million project.

Eden Project North would directly employ more than 400 people, with an additional 1,500 jobs supported in the region, and inject £200m per year into the North West economy. Subject to funding being secured, it is due to open in 2024.

“The project is now definitively shovel-ready and a compelling financial case has been made to government. We are primed and ready to create this beacon to a green and sustainable future, be part of Levelling Up and drive economic and social enhancements across the region.”

The Eden Project North planning application illustrated the vision for the Morecambe project, which has been heralded as a major new exemplar attraction. Eden Project North will showcase sustainable design, reimagining the British seaside resort for the 21st century.

Eden Project North’s “shell-like” domes will be constructed in timber and covered in a flexible transparent membrane with integrated solar cells. These four shells – known as the Rhythm Machine, the Bay Glade, the Bay Hall and the Natural Observatory – are set in a “dunescape” of landscaped roofing planted with coastal vegetation.

The layout of the domes has evolved since the early stages of design and they now surround the central Four Seasons Garden, to make better use of the available space and light while providing more sheltered public space.

Surrounding the buildings will be a collection of beautiful outdoor gardens, designed to reflect the flora, geology and rhythms of their unique coastal environment. These include the Rhythm Garden, which reimagines the existing Bay Arena and the Tide Garden, whose beds spiral down towards a tidal pool at the garden’s centre.

Public access to the promenade running around the edge of the Eden site will not be affected and access to some outdoor gardens will also be possible without buying an admission ticket. RNLI access will also be unaffected.

Eden Project North will be situated on the former site of the Bubbles leisure complex with the Grade II listed Winter Gardens and Midland Hotel its near neighbours. The project has been designed in a way that is sensitive and complementary to these important buildings and sightlines across the bay.

The project will have two restaurants, one on either side of the site, with both featuring indoor and outdoor seating and boasting spectacular views across Morecambe Bay.
Visitor flow will be managed with timed ticketing slots and combined travel and admission tickets. Incentives will be offered for those who arrive by walking, cycling or public transport.

Visitors who chose to arrive by car will be required to pre-book spaces either in existing car parks in Morecambe or at the park and ride service at junction 34 of the M6 to prevent congestion. Eden will continue to engage with and support the local community and other interested parties regarding future transport plans.

Eden’s ambition is for the construction and operations of Eden Project North to go beyond net-zero carbon emissions and achieve a net positive environmental position.

The submission of the planning application followed a formal consultation incorporating an online exhibition and in-person events. Feedback from the online consultation was overwhelmingly positive, revealing that 97 per cent of respondents were in support of Eden Project North with 94 per cent agreeing that the benefits will be felt throughout Morecambe and the wider area.

When asked if they supported the general design principles and approach for Eden Project North, 97 per cent of respondents said yes while 88 per cent supported the overall approach to the transport strategy.

Eden has committed to working with local stakeholder groups to formulate ticket concessions for local people, similar to the local’s pass and annual memberships offered by the Eden Project in Cornwall. School visits, educational programming and youth schemes will also be a major part of the Eden Project North offer, as they are in Cornwall.

A Milestone Win for Lancaster

Eden Project North is being delivered by the team behind the first Eden Project in Cornwall, alongside local partners Lancaster University, Lancaster City Council, Lancashire County Council and the Lancashire Enterprise Partnership, and is one of the key projects in Eden’s plans to expand around the UK and the world.

David Harland, Chief Executive of Eden Project International, said: “Planning permission is a huge milestone on our journey towards making Eden Project North an exemplar project for Morecambe, Lancashire and the North of England.

“The project is now definitively shovel-ready and a compelling financial case has been made to government. We are primed and ready to create this beacon to a green and sustainable future, be part of Levelling Up and drive economic and social enhancements across the region.

“While we are incredibly proud of what we and our partners have achieved so far, we now need UK government support to quickly bring this to fruition and maintain momentum.

“We’re hugely grateful to the Lancaster City Council planners for granting this landmark project planning permission. Massive thanks must also go to our partners and the community in the region for supporting us throughout the consultation process. We continue to be inspired by the wellspring of positivity we get from the people of Morecambe.”

Graphenstone Chosen as Paint Supplier for the Eden Project

Graphenstone UK Paints is to partner with the Eden Project, to help the visitor attraction measure CO2 absorption levels across the site. Graphenstone is known as the...

Children at  Puller Memorial School in Ware in Hertfordshire were recently visited by the education team from the world famous Eden Project, Construction company,...