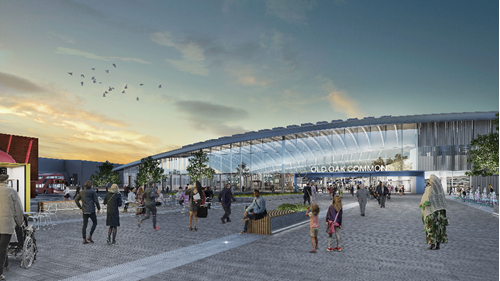 A joint venture between Balfour Beatty and Vinci Systra has been awarded the HS2 construction management contract for the £1 billion Old Oak Common station.

The joint venture will be responsible for the final design, construction and commissioning of the station in north-west London, delivering six underground platforms as well as up to eight platforms on the adjacent Great Western Main Line.

On completion, Old Oak Common station will become the UK’s best-connected station, providing direct services to three major airports, eight of Britain’s ten largest cities and form part of one of Britain’s largest regeneration projects which will help create up to 65,000 jobs and 25,000 new homes in west London while also dramatically increasing rail capacity across the UK.

At construction peak the project will employ a direct management team of 140 and a wider workforce of approximately 2,500.

The Guildhall was built around the 15th century hall and riverside meeting room. It has only received reactive maintenance and repairs since extensive rebuilding work was carried out after WW2.

More recently, surveys have revealed significant structural problems with the tower on the north side of the site, which is currently subsiding and cracking. Furthermore, the main roofs are also in need of replacement to prevent further water ingress.

Vinci’s teams began work in early September and the construction will see the building stabilised through major underpinning, protected from water damage and given a new lease of life.

With modern elements surrounding the historic core, the redevelopment will secure the long-term future of the Guildhall site, offering high quality office space, community use, cafe, a new riverside restaurant and better access for local residents.

Vinci Construction UK has also broken ground in delivering a new Acute Medical Unit (AMU) at one of the North-West’s busiest Accident and Emergency Departments.

A £10m project at the Royal Blackburn Hospital, will increase capacity within the hospital Emergency Department whilst relieving pressure on the over-stretched unit by providing urgent medical assessment facilities.

Vinci was appointed by East Lancashire Hospitals NHS Trust, to deliver the new facility under the Department of Health’s ProCure22 framework.