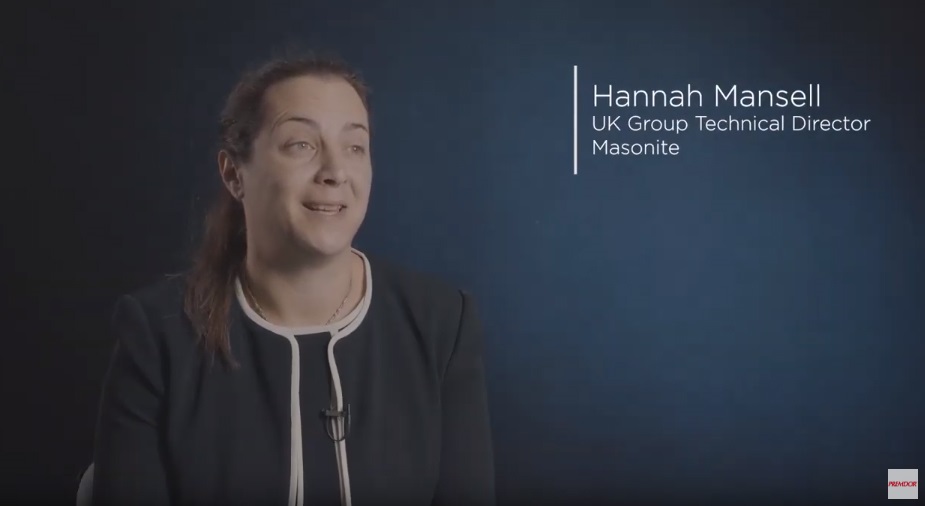 The videos give advice on each stage of the process to anyone buying or specifying fire doors, including architects, contractors and clients.

Brief interviews cover topics such as the role of fire doors in building and life safety, the crucial difference between ‘doors’ and ‘doorsets’, the manufacturing standards that customers should expect and the importance of the fire door testing and certification regime.

Mansell also gives tips on installation and maintenance of fire doors, as well as her personal views on innovation, the residents’ voice and the future of fire safety in the UK.

Mansell is Group Technical Director at Masonite UK, one of the world’s leading door manufacturers serving both the residential and architectural markets. She is also chair of the Passive Fire Protection Forum and a trustee of the Children’s Burns Trust.

She said: “Fire safety is never far from the headlines at the moment. The role of fire doors in protecting life and property keeps coming up as a major issue. Fire doors are a critical safety device, engineered as a system to protect building users and the emergency services too.

“However, the current official guidance on fire doors is still not as clear as it could be. So I think it is incredibly important for specifiers, contractors and everyone involved in building safety to build a close working relationship with their fire door manufacturer and to make the most of the technical expertise we can offer.”

Masonite currently serves approximately 9,000 customers in 64 countries, and is represented in the UK through the Premdor Crosby, Solidor, Door Stop International and National Hickman brands.

Fire doors are available in 30-minute (Fireshield FD30) and 60-minute (Firemaster FD60) options. Premdor’s fire rated doors and doorsets are compliant with all relevant British Standards and have been tested in accordance with BS 476: Part 22.

A new fire door safety video will be published on Premdor’s YouTube channel and other social media accounts on each day of Fire Door Safety Week.

Fire door safety campaigners are stressing the life saving role of fire doors as part of this year’s Fire Door Safety Week (23-29 September). The week is...

A complete fire doorset recovered from the lower floors at Grenfell Tower has been tested - and has failed. We've got the latest comments and updates plus...

Fire Door Safety Week is an awareness program set up in 2013 by the British Woodworking Federation, drawing attention to maintaining related security and upholding the...