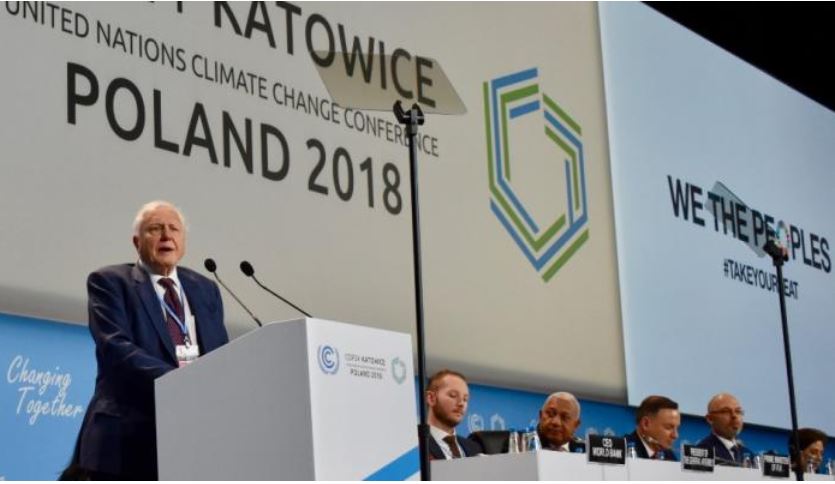 Sir David Attenborough has launched a United Nations campaign enabling individuals the world over to unite in actions to battle climate change. Attenborough was in Katowice, Poland (December 3) for the start of the United Nations Climate Change Conference - also known as COP24.

Sir David urged everyone to use the UN’s new ActNow.bot, designed to give people the power and knowledge to take personal action against climate change directly on the Facebook Messenger Platform.

Speaking for The People’s Seat initiative, Sir David called it the result of new activism shaped by people from around the world and collected through social media. “In the last two weeks,” he said, “the world’s people have taken part in creating this address, answering polls, creating videos and voicing their opinions."

The famous broadcaster continued: “They want you - the decision makers - to act now,” as he addressed the politicians and officials assembled for two weeks in this Polish mining town to negotiate next steps in monitoring and mitigating climate change.

“The people are behind you, supporting you in making tough decisions but they are also willing to make sacrifices in their daily lives,” Attenborough said.  “To make this even easier, the UN is launching the Act Now bot. Helping people to discover simple everyday actions that they can take because they recognise that they too must play their part.”

The campaign was created with the support of Facebook and advertising company Grey and harnesses advances in artificial intelligence (AI) to engage people in the growing movement to take climate action.

The ActNow.bot is a fully interactive and responsive chat bot, located on the UN’s Facebook page that suggests everyday actions – determined by the user’s interaction with the bot – that can be taken to preserve the environment and logged on the platform to be shared with social media followers to persuade them to take action too.

The collective actions will be presented during the Secretary-General’s Climate Summit in New York in September 2019.

UN Under-Secretary-General of Global Communications Alison Smale welcomed the launch. She said: “Rising global temperature, record levels of greenhouse emissions and increasing impacts of climate change require urgent and measurable action on the part of everyone,’’ she said.  “This new social media tool, a Facebook Messenger bot, will help people learn about activities to reduce their carbon footprint, and show - and share with friends - how they are making an impact.  We all need to do things differently.”

The initiative comes as global decision makers are being asked to intensify efforts in the battle against climate change and to agree the implementation guidelines of the landmark 2015 Paris Agreement.

All this is evolving against a backdrop of conclusive new evidence by UN Environment which found countries need to significantly step up the necessary actions to fulfil the commitments made in Paris.

The Climate Action Bot aims to highlight popular global commitment to reducing climate change, and to stand behind decision makers worldwide in taking actions to preserve our environment.

The above link will also allow you to watch the People’s Address delivered by Sir David Attenborough.

Holders of The Planet Mark have reduced their carbon emissions by 12% per employee in 2017. Organisations certified by The Planet Mark range from large multi-nationals and corporates, including Bidfood, Prologis and DP World London Gateway, to small and medium-sized enterprises from across a wide range of sectors.  “Our 2017 findings also show just how much of an impact organisations that measure and report their carbon footprint and commit to year-on-year reductions can and are having. During COP24 we urge all businesses to take action and play their part," said Steve Malkin, CEO.

It is still possible to keep global warming below 2°C, but the technical feasibility of bridging the 1.5°C gap is dwindling.

Global emissions are on the rise as national commitments to combat climate change come up short. But surging momentum from the private sector and untapped potential from innovation and green-financing offer pathways to bridge the emissions gap. Those findings along with a sweeping review of climate action and the latest measurements of global emissions were presented by authors of the 2018 Emissions Gap Report during a an event in Paris on November 27.

The flagship report from UN Environment annually presents a definitive assessment of the so-called 'emissions gap' – the gap between anticipated emission levels in 2030, compared to levels consistent with a 2°C / 1.5°C target.

The findings offer the latest accounting of national mitigation efforts and the ambitions countries have presented in their Nationally Determined Contributions, which form the foundation of the Paris Agreement.

Evidence outlined, just days before the start of the 24th Conference of the Parties to the United Nations Framework Convention on Climate Change (COP24) show global emissions have reached historic levels at 53.5 GtCO2e, with no signs of peaking - the point when emissions switch from increasing to decreasing. Authors assessed that only 57 countries (representing 60 per cent of global emissions) are on track to do so by 2030.

That analysis and a review of progress against national commitments under the Paris Agreement makes clear that the current pace of national action is insufficient to meet the Paris targets. Increased emissions and lagging action means the gap number in this year’s report is larger than ever. Translated into climate action, the authors conclude nations must raise their ambition by 3x to meet the 2°C and 5x to meet 1.5°C.

Arson of the planet

“If the IPCC report represented a global fire alarm, this report is the arson investigation,” said UN Environment Deputy Executive Director Joyce Msuya. “The science is clear, for all the ambitious climate action we’ve seen – governments need to move faster and with greater urgency. We’re feeding this fire while the means to extinguish it are within reach.”

A continuation of current trends will likely result in global warming of around 3°C by the end of the century, with continued temperature rises after that, according to the report findings.

While the authors highlight that there is still a possibility for bridging the emissions gap and keeping global warming below 2°C, the assessment issues a clear warning - the kind of drastic, large-scale action we urgently need has yet to been seen.

“When governments embrace fiscal policy measures to subsidize low-emission alternatives and tax fossil fuels, they can stimulate the right investments in the energy sector and significantly reduce carbon emissions.” said Jian Liu, UN Environment’s Chief Scientist. “Thankfully, the potential of using fiscal policy as an incentive is increasingly recognized, with 51 carbon pricing initiatives now in place or scheduled, covering roughly 15 percent of global emissions. If all fossil fuel subsidies were phased out, global carbon emissions could be reduced by up to 10 percent by 2030. Setting the right carbon price is also essential. At US $70 per ton of CO2, emission reductions of up to 40 percent are possible in some countries.”

The long-term warming trend has continued in 2018, with the average global temperature set to be the fourth highest on record. The 20 warmest years on record have been...