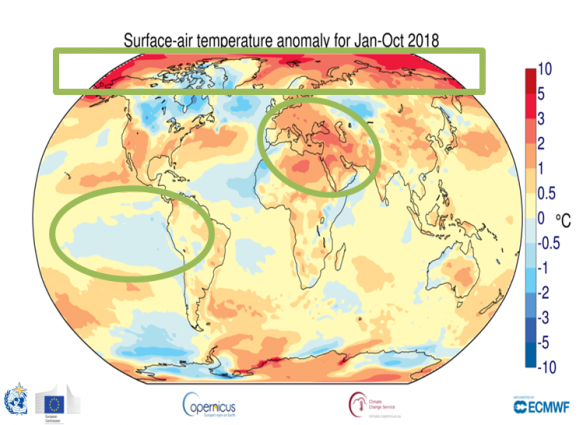 The long-term warming trend has continued in 2018, with the average global temperature set to be the fourth highest on record.

The 20 warmest years on record have been in the past 22 years, with the top four in the past four years, according to the World Meteorological Organization (WMO), reporting during COP24.

Other tell-tale signs of climate change, including sea level rise, ocean heat and acidification and sea-ice and glacier melt continue, whilst extreme weather left a trail of devastation on all continents, according to the WMO provisional Statement on the State of the Climate in 2018.  It includes details of impacts of climate change based on contributions from a wide range of United Nations partners.

1°C and not on track

The report shows that the global average temperature for the first ten months of the year was nearly 1°C above the pre-industrial baseline (1850-1900). This is based on five independently maintained global temperature data sets.

“We are not on track to meet climate change targets and rein in temperature increases,” said WMO Secretary-General Petteri Taalas. “Greenhouse gas concentrations are once again at record levels and if the current trend continues we may see temperature increases 3-5°C by the end of the century. If we exploit all known fossil fuel resources, the temperature rise will be considerably higher,” he said.

The last to do something about it

“It is worth repeating once again that we are the first generation to fully understand climate change and the last generation to be able to do something about it,” said Mr Taalas.

The Intergovernmental Panel on Climate Change (IPCC) special report on Global Warming of 1.5°C stated that the average global temperature for the decade 2006-2015 was 0.86°C above the pre-industrial baseline. The average increase above the same baseline for the most recent decade 2009-2018 was about 0.93°C and for the past five years, 2014-2018, was 1.04°C above the pre-industrial baseline.

“These are more than just numbers,” said WMO Deputy Secretary-General Elena Manaenkova. “Every fraction of a degree of warming makes a difference to human health and access to food and fresh water, to the extinction of animals and plants, to the survival of coral reefs and marine life. It makes a difference to economic productivity, food security and to the resilience of our infrastructure and cities. It makes a difference to the speed of glacier melt and water supplies, and the future of low-lying islands and coastal communities. Every extra bit matters.”

The WMO report adds to the authoritative scientific evidence that will inform UN climate change negotiations from 2-14 December in Katowice, Poland. The key objective of the meeting is to adopt the implementation guidelines of the Paris Agreement on Climate Change, which aims to hold the global average temperature increase to as close as possible to 1.5°C.

The IPCC report on Global Warming of 1.5°C said that this target was physically possible but would require unprecedented changes in our lifestyle, energy and transport systems. It showed how keeping temperature increases below 2°C would reduce the risks to human well-being, ecosystems and sustainable development.

The World Meteorological Organization report was influenced by a large number of National Meteorological and Hydrological Services. A UK assessment warned summer temperatures could be up to 5.4°C hotter and summer rainfall could decrease by up to 47% by 2070. Sea levels in London could rise by 1.15m by 2100.

Picture: The 20 warmest years on record have been in the past 22 years, with the top four in the past four years, according to the WMO.

Veolia are the first recycling company to join the UK Food Waste Reduction Roadmap - an initiative that aims to get businesses to reduce food waste by 50% by 2030. The...

Companies with a combined market capitalisation of over US$2.3 trillion and annual direct emissions equivalent to 73 coal-fired power plants are taking action to align...