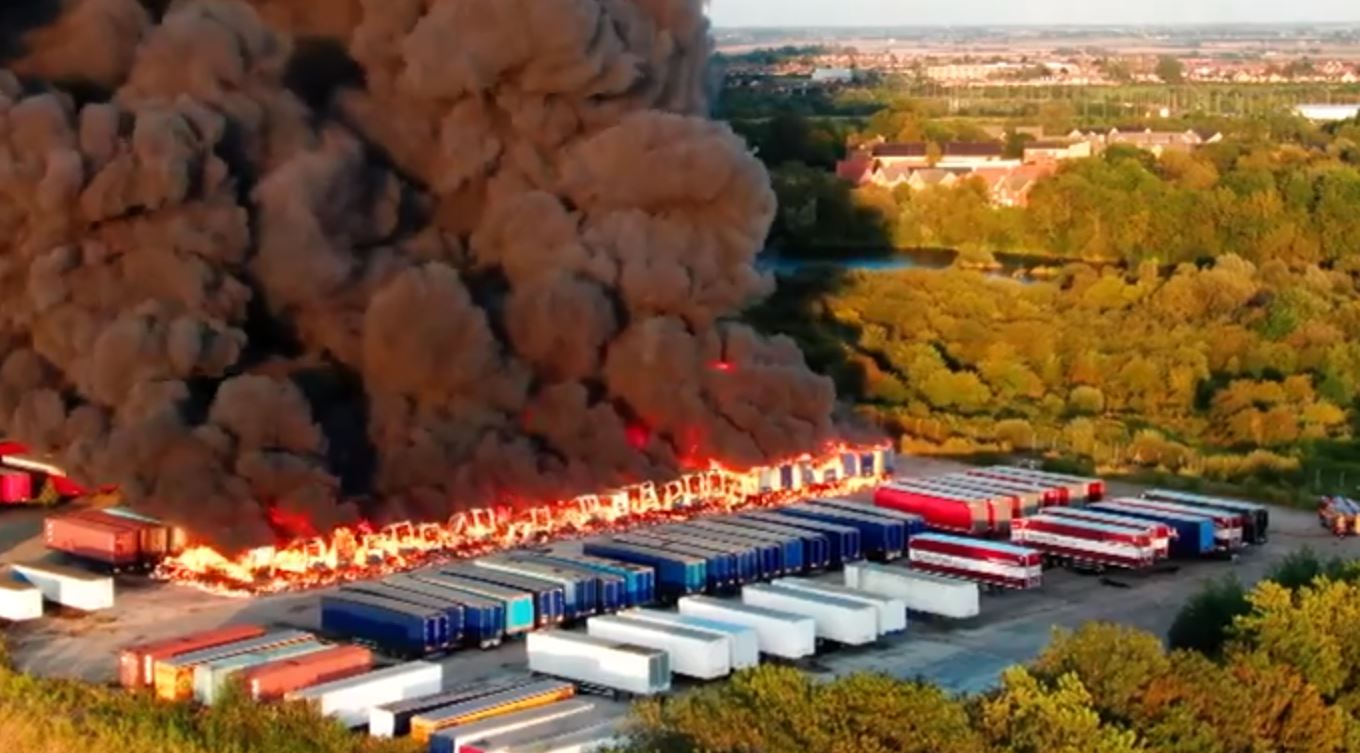 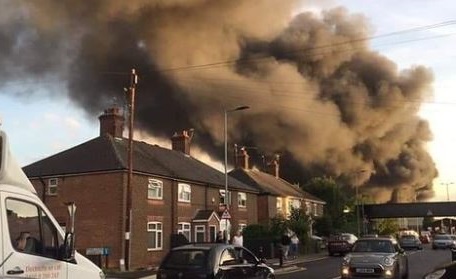 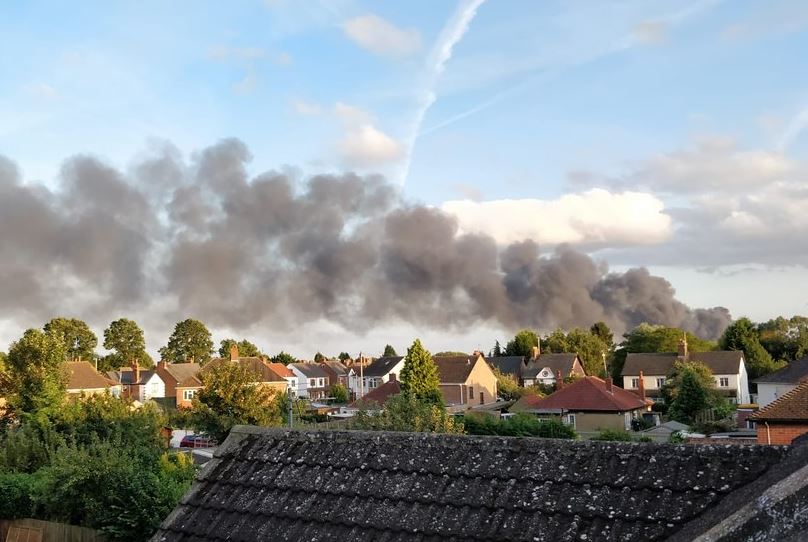 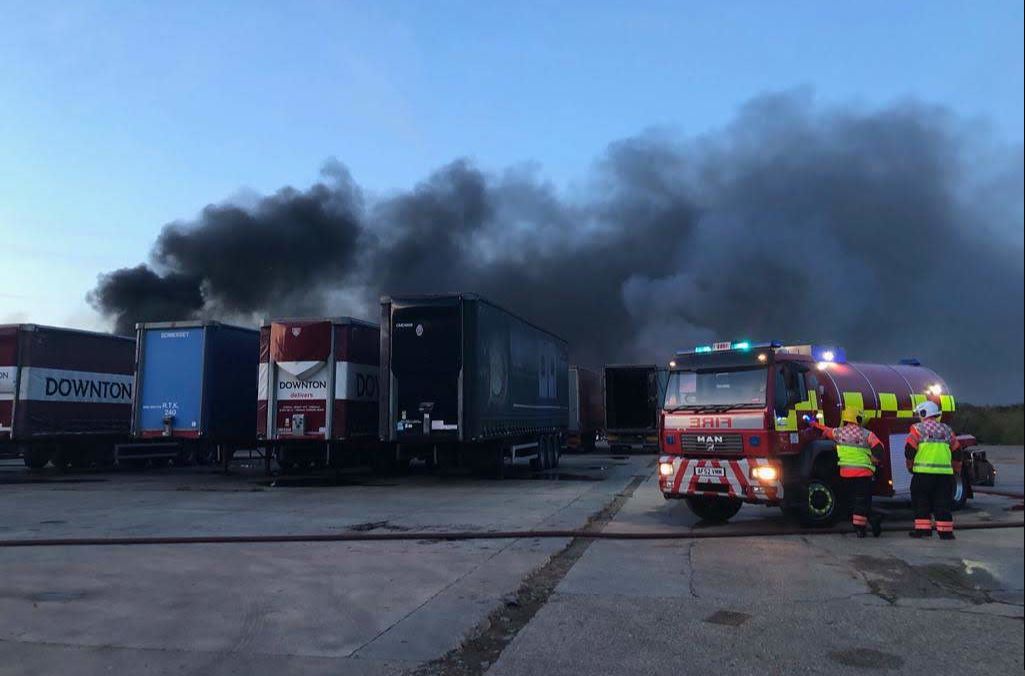 A fire at a spare parts holding facility has a ring of irony as it is owned by Whirlpool, the manufacturer of tumble dryers implicated in domestic fires and whose glass cooktops are on recall because they turn themselves on.

The evening of August 29 saw the huge fire at Woodston in Peterborough reported to Cambridge Fire & Rescue at 6:57pm. Plumes of smoke covered a large area as well over 100  lorry trailers were under threat of being engulfed. The trailers were parked up in rows. They are used as permanent storage for spare parts. They are parked at the rear of a Hotpoint factory which is on the site of a former Pedigree Petfoods facility.

Crews arrived to find 52 units actually. 50 firefighters were joined at the scene by police and ambulance crews. Once the blaze was under control, it was reported that no injuries had been sustained. Temporary local road closures were put in place. Members of the public were urged to avoid the area and local residents were advised to keep doors and windows closed.

Lisa Clements, a local resident, Tweeted 'My neighbourhood is like a scene from Shameless - a woman sets her husband's shed on fire; streets closed off; family riots outside; and about half of Cambridge Fire and Rescue team are here.

The blaze was so vast that it required firefighting crews to be brought in from some all over the local area - Whittlesey, Dogsthorpe, Stanground, Yaxley, March, Sawtry, Wisbech, along with a crew from Spalding in Lincolnshire. The incident command unit came from Huntingdon. A water carrier from  local Ramsey but two others had to be drafted in - one from Newmarket in Suffolk and another from Fakenham in Norfolk.

The fire service worked into the night to bring the fire under control and continue the damping-down exercise.

A spokesperson for Whirlpool said: "Most importantly, we can confirm that nobody has been injured in this incident and none of the buildings on our site have been affected. We expect it to be business as usual on Friday."

26,300 glass cooktops sold under the Whirlpool, KitchenAid and JennAir brands were recalled on Wednesday august 28 by Whirlpool, according to the US Consumer Product Safety Commission - as they mysteriously turn themselves on leading to a burn and fire hazard - the company had received 133 complaints from concerned owners.

More than 100 Creda, Hotpoint, Indesit, Proline and Swan tumble dryer models (all brands owned by Whirlpool) made between April 2004 and October 2015 could pose a fire risk. The fault in the dryers could lead to fires if excess fluff comes into contact with the heating element.

Whirlpool has sent engineers to modify machines where they have been asked to do so having been aware of the problem for years but failing to act en masse. On 22 July 2019 Whirlpool finally initiated a recall of tumble dryers that had not yet been modified.

Chief Fire Officers in the UK had urged the Government to act to force Whirlpool into the recall that could cost the company £millions. A Class Action has been filed in the US by those affected by fires blamed on Whirlpool dryers - including an action from residents of Grenfell.

Picture: Lorry trailers holding spare parts for Hotpoint have gone up in flames.