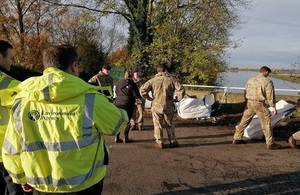 The weather out there is frightful - for some...so what does the forecast predict for next week and for the month ahead as we head into December?

The Met Office had not issued any specific weather warnings (at 5:30pm Thursday November 14) despite heavy snowfall in Wales which was the subject of a warning for Thursday. According to the Met, Wales can expect the snow to turn to rain.

On Friday November 15, the Met Office issued a Yellow warning for Northern Ireland (with a focus on Londonderry/Derry) for ice on roads as the temperature was expected to drop below Zero.

Outlook for Saturday to Monday Nov 18

Rain and hill snow spreading west whilst easing Saturday. Further rain with hill snow for eastern and northern areas through Sunday and Monday. Cold with some frost and fog.

A frosty start to Monday with some patchy mist or freezing fog. The rest of the day will be cold and cloudy with some showers across eastern areas, staying largely dry in the west. The start of next week should be drier and brighter for many but it will be cold - although the Met Office has said it is not entirely confident of its predictions. There is a possibility of rain in the west, which may fall as hill snow at times. By the end of the week, there may be a switch to relatively milder conditions with winds becoming more southerly. Further rain and strong winds look to continue in western areas initially with a risk of snow on higher ground. Meanwhile further east, drier and more settled weather is expected.

The start of the period will see some settled weather in the east with rain, strong winds and possible gales in the west. Through early December there could be a period of more settled weather across much of the UK. This would bring drier conditions for many through the day with a chance of frost and fog developing overnight. Temperatures look to be around average for the time of year.

The Environment Agency (EA) warned (on November 13) that flood hit communities should remain vigilant as more rain could be expected. The warnings were particularly relevant to those living and working in South Yorkshire and Lincolnshire. The EA has been putting up temporary barriers and taking sandbags in those areas aided by the military.

An EA spokesperson said: "Although river levels have fallen over the past few days, prolonged rain on Thursday, Friday and over the weekend could bring further river and surface water flooding to areas of South Yorkshire, Lincolnshire and the Midlands where the ground is already saturated."

300 EA staff have been working 24/7 around the country deploying 39 pumps across five locations. In Fishlake, five ultra-high volume pumps are fully operational and pumping out 16 cubic metres of water per second. EA teams have deployed more than 2,200 sandbags in affected areas.

Since the flooding began last week, approximately 14,400 properties have been protected by flood defences, including nearly 5,000 properties in South Yorkshire alone. Flood storage areas are also being operated to protect 7,000 homes in parts of Nottinghamshire, Derbyshire and Lincolnshire.

At the time, Kate Marks, Flood Duty Manager at the Environment Agency, said: "Heavy rain is expected on Thursday, Friday and over the weekend which could lead to further flooding for communities in South Yorkshire around the Lower River Don. Parts of Lincolnshire and the Midlands could also be affected by rain falling on already saturated ground over Thursday and Friday, as well as other parts of England as rain crosses the country from west to east.

"The Environment Agency has teams working around the clock on the ground erecting temporary barriers and delivering sandbags to areas expecting further rainfall.

"Our incident rooms remain open 24 hours a day and we are continuing to work closely with local authorities and partners."

Picture: EA teams out on the ground in South Yorkshire alongside army personnel.

With the UK having just experienced the severest winter weather so far, Ken Diable offers five essential tips for FMs who have staff working at height to ensure safety as...

Devastating flood damage caused by sudden bank breaches can be minimised by tapping into local knowledge and resources, a major risk management authority has...