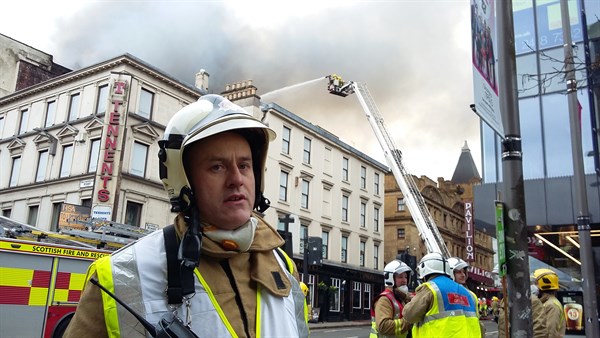 The fire on Glasgow's famous Sauchiehall Street has led to the street and those in the vicinity being cordoned off for much longer - not because of the fire but because of the asbestos that has been disturbed.

More than 120 firefighters were called to extinguish a 'significant fire' on Thursday morning which is believed to have started in a basement nightclub. In total  20 fire engines were called as the fire took hold of several commercial properties.

Assistant Chief Officer Lewis Ramsay, Scottish Fire & Rescue Service Director of Response and Resilience and the Incident Commander at the scene reported no casualties. He told ThisWeekinFM on Thursday: "This is an extremely challenging incident. Crews immediately and safely evacuated the occupants of several nearby buildings. This will be a protracted incident and crews will remain on the scene as they work to prevent further fire spread and damage in this prominent city centre location. This is the largest fire SFRS has faced since the service came in to operation.

"We would urge the occupants of surrounding buildings to remain indoors and keep their windows closed due to the suspected presence of asbestos."

On Friday March 23 morning, streets remained cordoned off as the fire and police services continued to monitor the asbestos situation.

Picture: The fire in Sauchiehall Street has caused longer disruption as asbestos has been discovered