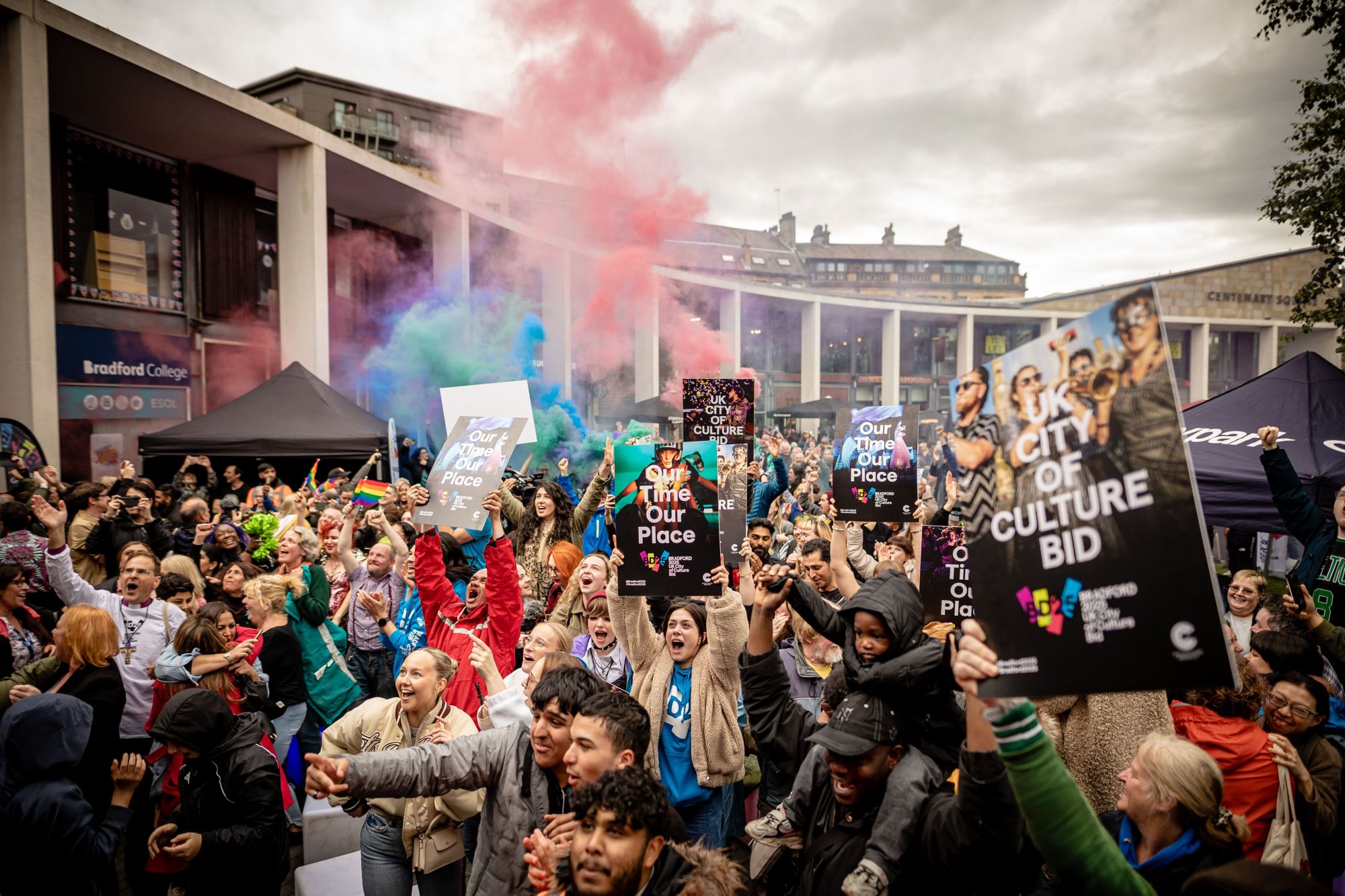 The Bradford district has been named UK City of Culture 2025. The winner of the hotly contested competition was announced live on BBC 1’s The One Show on 31 May 2022 by the Secretary of State for the Department of Digital, Culture, Media and Sport (DCMS).

Bradford will now receive £275,000 in initial seed funding to make sure the city can hit the ground running and get the wheels in motion early as it develops its plans for 2025. This grant will help pave the way for a year of unforgettable cultural activities and events.

"This is a huge opportunity to celebrate our extraordinary cultural heritage and for our young, diverse population - who have been so involved in shaping our bid - to become leaders and changemakers and begin a new chapter in our story."

Responding to the announcement, Shanaz Gulzar TV presenter, artist and Chair of Bradford 2025 said: “This fantastic result is down to the ambition, belief and hard work of thousands of people across the district who were behind our bid. We are thrilled that Bradford district has been chosen as the next UK City of Culture. This is a huge opportunity to celebrate our extraordinary cultural heritage and for our young, diverse population - who have been so involved in shaping our bid - to become leaders and changemakers and begin a new chapter in our story. Bradford has been overlooked and underestimated for so long – it’s now our time to shine.”

For those that don’t know about Bradford, the city may not strike the memory as one that would stand out for the award. However, as the 5th largest metropolitan city in England with a growing population of 542,100, there’s plenty of source for a thriving community of creativity and business. It’s the youngest city in the UK and incredibly diverse, with 160 languages spoken by children in their schools.

Its economy, worth 11.6bn at the last official estimate, grew by 16 per cent from 2014 to 2019. Barclays Bank SME Growth Factors Index ranked Bradford as the best place in Britain to start a business, and the Sunday Times ranked it as one of the top 20 cities for business growth.

The city features multiple listed buildings, including what was once the largest silk factory in the world, Lister’s Mill. The Bronte Parsonage, Saltair UNESCO World Heritage Site and the National Science and Media Museum were all noted in the cultural bid. It focused on cultivating pride and new opportunities through local engagement with artists and residents.

Sir Phil Redmond, Chair of the Independent Advisory Panel, said to the BBC: "The selection is never about whether one bid is better than another, it is more that one bid has the potential to make a bigger and deliverable impact. For 2021 we asked Coventry to raise the bar previously set by Derry-Londonderry 2013 and then raised by Hull 2017. Challenged by the pandemic, Coventry have certainly done that and I am looking forward to seeing how far the cultural bar can be raised in BD25."

Where is the Industry Growth in Bradford?

Particular sectors of strength noted by the council in Bradford include "advanced engineering, chemicals, automotive components and food manufacture alongside financial services and digital technologies."

There are several exciting new developments that will benefit from the attention this award is bound to bring. A Public Service Hub of 20,000 square feet is under construction, giving a sustainable venue to civil servants, local authorities, NHS bodies, emergency services and charities.

As for private offices, Muse Developments, leaders in town and city-centre urban regeneration, officially launched One City Park in partnership with the council in May this year – this is to be a BREEAM ‘Excellent’ 56,403 sq. ft office building in the heart of Bradford city centre.

The development, to be built on the former police HQ site, is the first Grade A office scheme delivered in Bradford city centre for 20 years and will directly address the need for high-quality offices, with flexible options now available to secure off-plan.

Three of the proposed nine sites for the Leeds City Region M62 Corridor Enterprise Zone are also situated in Bradford, providing a unique opportunity for "advanced manufacturing and the related supply chain and logistics operations."

What Will the Celebrations Include?

Bradford district’s year of culture is set to deliver more than 1,000 new performances and events including 365 artist commissions, a series of major arts festivals and major national and international collaborations. Its themes will be rooted in the unique heritage and character of Bradford and will reveal the magic of the district that is held in its people, its ambition, and above all, its potential.

West Yorkshire Mayor, Tracy Brabin, said: “I am absolutely delighted that the Bradford district will be the UK’s City of Culture in 2025. No city deserves this more. The entire year will be a fitting showcase for the incredible cultural and artistic talent in this amazing city.

The City of Culture judging process has also helped us to highlight the breadth of talent and the vibrant cultural offer throughout West Yorkshire. There’s no doubt we have some of the finest creative and cultural talent, events, festivals, and destinations anywhere in the UK.”

What Does the Accolade Provide for Bradford?

Winning the UK City of Culture title is a game-changer for the Bradford district - which includes Bradford, Keighley, Ilkley, Haworth, Shipley and Bingley - putting it firmly on the national and international stage. A City of Culture designation brings considerable long-term benefits including increased employment, new investment, enhanced skills, renewed pride, greater cultural capacity and more opportunities to participate in arts and cultural activities.

It is estimated that the UK City of Culture 2025 title could bring an extra £700m into Bradford district, creating 3,000 jobs and attracting around 1.1m visitors by 2030.

Campaigning for Investment and Recognition

The announcement of the winner is the culmination of a three-year long campaign for the Bradford district which announced its intention to bid for UK City of Culture status in the summer of 2019.

Since then, Bradford 2025, in partnership with Bradford Council, has backed a series of ground-breaking projects which offer a glimpse into what its City of Culture year could look like. This includes:

Preparations for Bradford 2025 have generated a new confidence in the area’s creative sector which has secured £2 million for The Leap, the city’s Creative People and Places programme, and £1.5 million for Bradford Producing Hub – one of only two pilot projects in the UK receiving funds to develop local talent.

Earlier this year saw the launch of The Unit, a new resource for filmmakers, a partnership with Bradford Council backed by Channel 4 as part of its ongoing partnership and investment in the district.

The facility is the first milestone in an ambitious 10-year vision for the screen sector in the district, as set out in Bradford Council’s "As Seen on Screen Strategy". Partners from every sector of the business community have come on board as official supporters of the bid including Bradford Bulls, Emerald Group Publishing, Group Alfa, Jinnah Group, Morrisons, Rushbond PLC, The Broadway and Yorkshire Building Society. The campaign also has seen new levels of collaboration between University of Bradford and Bradford Council.

A Bradford 2025 transition team will now kick-start a recruitment drive to appoint a Creative Director and a Managing Director to lead the delivery of the district’s bid. The roles are set to be in place during 2022 with recruitment of a wider delivery team to follow.

How Can LightFi Work with BREEAM In-Use Criteria to Ensure the Most Sustainable Buildings?

Innovative Proptech companies such as LightFi are paving the way to net-zero by helping buildings become more energy efficient whilst promoting occupant health and...