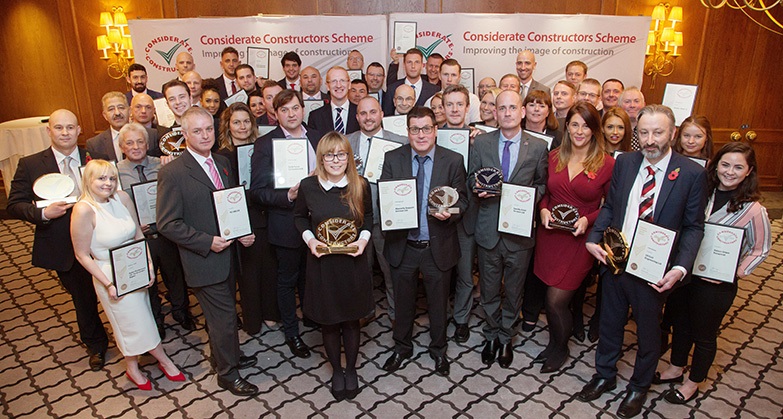 The highest performing Considerate Constructors Scheme registered construction companies and suppliers will be attending the 2018 National Company and Supplier Awards on 15-16 November at the RIBA's headquarters in central London.

Every company and supplier registered with the Scheme had their performance against the Scheme’s Code of Considerate Practice assessed between 1 August 2017 and 31 July 2018. Only the very highest performing have now been selected to be eligible to win at this year’s awards.

Industry leaders, Brian Berry (Chief Executive at the Federation of Master Builders) and Shaun McCarthy OBE (Chair of the Supply Chain Sustainability School) will be announcing whether each winning company or supplier has received a Bronze, Silver or Gold Award for their achievements. Runners-up and the winners of the highly acclaimed ‘Most Considerate Company’ and ‘Most Considerate Supplier’ Awards will also be announced at the ceremonies.

Considerate Constructors Scheme Chief Executive Edward Hardy said on the eve of the awards: “Scheme registered companies and suppliers play a crucial role in promoting a positive image of our industry, with the standards of best practice and general consideration shown within these organisations increasing significantly year on year.

“On behalf of the Scheme, I would like to offer my congratulations to every registered company and supplier winning an award."

Picture: Winners at the 2017 National Company and Supplier Award.

Ultras To Get Their Just Rewards

The top players - the Ultra Sites - in the Considerate Constructors Scheme are to be recognised at the first National Ultra Site Awards. Ultra Sites have met the...

Builders’ Conference, an independent trade body, has published a review and commentary on the effect of COVID-19 on construction contract awards.   CEO...

Construction Output Forecast to Flatline in 2018

After a weak start to the year following the demise of Carillion in January and adverse weather across the country in February and March, the Construction Products...

Too Cold To Lay Bricks But Construction Activity Warms

A number of construction sites across the UK have ground to a halt due to heavy snow, according to the Federation of Master Builders. Sarah McMonagle, Director of...

The Considerate Constructors Scheme - the national scheme established by the construction industry to improve its image - has honoured the Most Considerate Companies and...