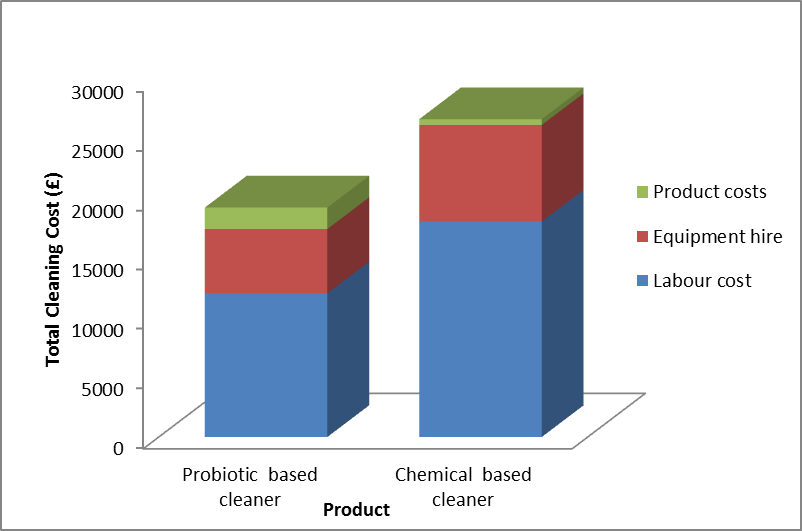 By replacing chemical cleaners with biological alternatives, contractors and landlords could save millions of pounds, writes Dr Emma Saunders - and international business decision makers are heading that way.

Over an extended period of time, a building’s exterior will be cleaned multiple times to ensure there is no build-up of unsightly soiling that can cause long-term structural damage and become an eyesore.

Maintaining the exterior of a building is a crucial but expensive process. The cleanliness of a building’s façade creates the first impression a visitor has, and even more importantly, falling behind in the exterior’s upkeep can lead to expensive repair costs in the future due to structural damage.

Building owners and the contractors they employ know this and spend tens of millions of pounds on surface cleaners every year to maintain and protect building exteriors. But the vast majority of products used tend to be cheap traditional chemical cleaners that simply don’t offer the short-term results or long-term protection contractors are after.

Traditional chemical cleaners are flawed by design. They’re developed to offer some immediate cleaning benefits at a very low price, yet the low price point means that once diluted the product is only minimally effective and requires either frequent cleaning or a lot of labour to get the desired results.

Contractors also need to consider that the chemical cleaners they use have harsh pH extremes that can cause long-term damage to surfaces, by causing erosion to the cladding and building fixtures.  The products can also be dangerous to handle and use for employees and have a negative impact on the wider environment.

However, biological cleaners are vastly different from their chemical counterparts.

The continued use of biological products allows the beneficial bacterial to colonise the building’s exterior, creating a sustainable environment where even after the initial clean, the bacteria continue to break down soiling and this is what gives biological cleaners their long-term cleaning efficacy.

Labour cost savings can be substantial. In a comparative trial undertaken by Genesis Biosciences, the task of cleaning the exterior cladding of an exhibition centre took five cleaning staff a total of 60 days using chemical based cleaning products. This was reduced to 40 days when a biological exterior hard surface cleaner was used instead.

By reducing the labour and equipment hire costs, the overall cost of the cleaning task decreased by 28% [1].  And, due to the continued cleaning efficacy of the biological cleaning products applied, the frequency of the cleaning task was reduced from 12-18 months to three years resulting in long-term cost savings for the customer.

The second cost saving advantage of using biological cleaners is that the building’s exterior won’t be accidently damaged because of the harmful pH extremes found in chemical cleaners. Continued exposure to harsh chemicals can cause long-term surface corrosion, which is very expensive to repair.

With biological cleaners, the beneficial Bacillus offer long-term protection against soiling and this helps to protect the infrastructure.

While biological cleaners might be more expensive to purchase than chemical alternatives, in the mid to long-term, the products offer far bigger cost savings and also provide a number of cleaning benefits.

According to a US study, more than eight in ten now say they are shifting from merely focusing on cost reduction to risk reduction when it comes to sustainability and the use of natural resources.

Referred to as the Deloitte Resources 2017 Study, this annual study was based on their findings for calendar year 2016. The researchers conducted more than 700 online interviews with decision makers in companies with more than 250 employees and were in a variety of different industries.

"The gist of what they found," according to Stephen Ashkin, CEO of Sustainability Dashboard Tools (who brought the report to ThisWeekinFM's attention), "was that companies are getting much more involved in resource and energy management. In fact, it has been increasing in increments for nearly a decade.

"As to why these companies are moving in this direction, 54 per cent said cutting costs was the primary factor. However, they found something else evolving. More than eight in ten now say they are shifting from merely focusing on cost reduction to risk reduction. Reducing risk is how companies can be more resilient to unexpected price increases in energy, fuel, and water or survive significant storms, such as the recent hurricanes."

Among the other findings of the study were the following:

"On the consumer side," Ashkin says, "the researchers found that Millennials are strongly behind sustainability initiatives. They promote and share innovations on social media and are willing to put their money where their values are."

Stephen P. Ashkin is president of The Ashkin Group, a consulting firm specializing in greening the cleaning industry.

Cleaning products are an everyday necessity in the workplace but they can also be toxic or corrosive. Here, Lauren O'Connor from the PPE, tools and cleaning products...

Welcome to the third part of our Don’t Waste It Roundtable, sponsored by Reconomy. In the penultimate video of our four-part series, the theme this week is...

Welcome to part two of our coverage of the Don’t Waste It Roundtable, sponsored by Reconomy. In the second of a four-part series, we continue with the subject of...

This week sees us dive into the coverage of our Don’t Waste It Roundtable, sponsored by Reconomy. In the first in a four-part series of informative videos, we begin...