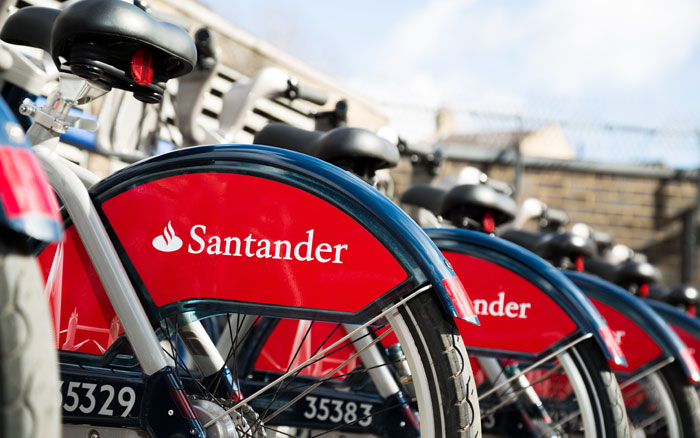 Boris Bike customers cycled the equivalent of 65 return trips to the moon in 2018 - with more than 35,000 hires made on Christmas Day alone.

For the first time, more than 10.5 million journeys were made using Santander Cycles in a calendar year, according to the latest figures for the year ending 2018.

The London's cycle hire scheme saw an average of 29,500 hires each day - the highest daily average since the scheme started in 2010 and there were five consecutive months when the scheme , administered by Transport for London, achieved more than one million hires.

In total there have been more than 77 million journeys since 'Boris Bikes' (named after Mayor Boris Johnson) launched in July 2010.

In November, the process of hiring a bike was made quicker and easier with the introduction of new technology, allowing customers to pay with contactless bank cards. The upgrade also removed five stages of the payment process at all 775 terminals across London.

Will Norman, London's Walking and Cycling Commissioner, said: "Santander Cycles are such a fun and easy way to get around London so more and more people are choosing to hire them all year round - breaking records in the process.

"Encouraging more Londoners to cycle as part of their everyday routine is crucial for Londoners' health and to help tackle congestion and air pollution."

David Eddington, Head of Cycle Hire at TfL, said: "Londoners and visitors continued pedalling to help us reach our best year ever. We've seen a huge increase in the numbers of people choosing to cycle in London, with a 35 per cent increase since our cycle hire scheme was introduced, and hope that number will continue to rise."

Cycling in London has seen record levels of funding allocated to deliver high quality cycle routes across. Construction work on several major new cycle routes is set to begin in 2019, including between Tower Bridge and Greenwich next summer. Following a public consultation next spring, TfL will work with boroughs and local partners to also build new routes between Camden and Tottenham Hale and Hackney and the Isle of Dogs.

Picture: Customers of the Santander/TfL cycle system did the equivalent of 65 return trips to the moon in 2018.

An online tool that assesses the energy profile, compliance, user-friendliness and security of a building has been launched by Bouygues Energies & Services. Using...

PropTech company Plentific has launched “Inspections” – a software solution that automates the inspection process for residential and commercial...