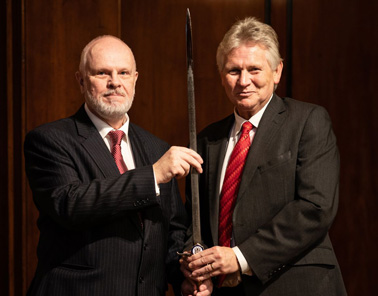 A cleaning and waste management services company has taken a British Safety Council Sword of Honour for 'outstanding' management of health and safety risks at two Jaguar Land Rover plants.

Leadec (the company in question) achieved the maximum five stars in the British Safety Council’s (BSC) health and safety management audit scheme at each of the Jaguar Land Rover sites (four in total) where audited - with zero non-conformities.

It was the on-site operations at Jaguar Land Rover’s Engine Manufacturing Centre in Wolverhampton and the vehicle assembly plant in Castle Bromwich which won Leadec their 2019 Sword. Only 84 companies worldwide achieved a Sword of Honour in 2019. They are awarded to companies that demonstrate excellence in the management of health and safety risks at work.

In order to compete for the Sword of Honour, Leadec first had to achieve the maximum five stars in the BSC’s health and safety management audit scheme in the period August 2018-July 2019. The company then had to demonstrate to an independent panel of experts that they had achieved 'excellence' in health and safety management throughout the business - from the shopfloor to the boardroom.

Leadec undertook five-star audits at its head office in Warwick and at four Jaguar Land Rover locations, having chosen to make no preparation before the first site audit to test thier management systems against the industry benchmark.

They narrowly missed out on scoring five stars at that audit, however, after making only minimal changes to their management systems, achieved five stars for the remaining three audits, with the first audit site awarded five stars shortly afterwards.

Lee Smith, MD, said: “It is our express aim that all of our employees and customers receive the benefits of a great health and safety management system.

“As an organisation whose employees are mostly based on customer premises, the emphasis on health and safety is constantly reinforced, whether that be through training, incessant auditing or continuous improvement."