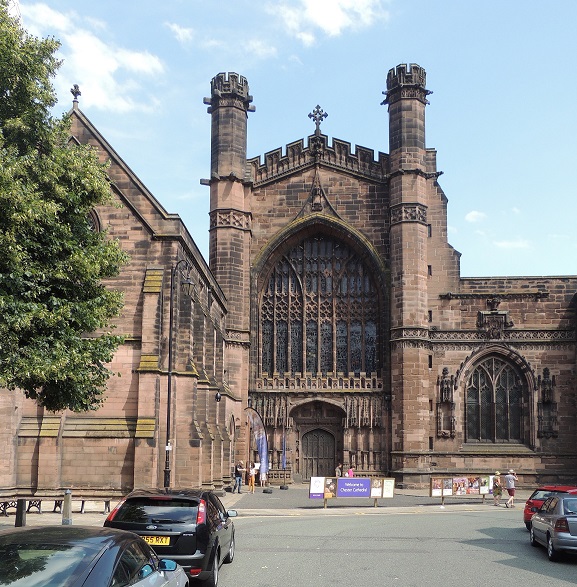 Two men scaled Coventry Cathedral at the weekend, requiring a review of security. Meanwhile, Chester Cathedral has already put in place measures to protect from vandalism - and fire.

The two Coventry Cathedral climbers were reported as drunk by local police who escorted the pair in to custody for aggravated trespass. The men, aged 36 and 25 had been rescued by the fire brigade when their alcohol feat of daring do went wrong and left them stranded - unable to get down from where they'd got to.

A Coventry Cathedral spokesperson told ThisWeekinFM: "We do take our security responsibilities very seriously but we will now have to review our security measures."

Over at Chester, Chubb Fire & Security is helping to protect the historic Grade I listed cathedral from potential vandalism and anti-social behaviour with the installation of a new CCTV system.

Located in the heart of the city, the cathedral is surrounded by large grounds that are accessible from all sides and susceptible to anti-social behaviour including loitering, drinking and drug use. A security system was needed to monitor the grounds and deter this type of behaviour.

Chris Jones, Inspector, Chester Cathedral Constables, has been trained by the police and is registered as a Police Officer with similar powers. He said: “In looking for a new CCTV system, I referred to the Home Office guidelines and sought the best possible solution with the greatest functionality so it was future-proofed for years to come.”

Following a number of site surveys with the cathedral’s architect and English Heritage, strict aesthetics guidelines were imposed to preserve the site’s Grade I listed status.

Chubb specified a system that included a number of long-range and short-range pan, tilt and zoom cameras as well as static dome cameras installed inside and outside the historic landmark.

An automatic number plate recognition camera is also installed at the barrier protecting access to the site, and all systems are hard-wired or wirelessly routed through a series of network switches to the network video recorder in the security office.

Each of the cameras is mounted on a bracket that was bespoke-built by an ironmonger and spray-painted black by a specialist company. Each of the brackets had to be drilled into the mortar, not the stone, to ensure damage was limited.

A number of health and safety briefings had to be held to ensure engineers’ safety when climbing spiral staircases and accessing external roof voids and walkways.