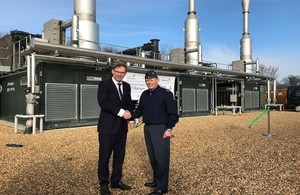 RAF Marham, the home of the UK’s F-35 multi role combat jets, is set to become the first military airbase to be powered by green electricity.

Defence Minister Tobias Ellwood made the announcement today during a visit to a Norfolk biogas plant, where he officially opened the new site that will provide energy to the airbase.

Electricity will be fuelled by fermented locally grown crops, providing 95% of RAF Marham’s energy needs and saving the MoD nearly £300,000 every year.

The facility, built by Future Biogas, will generate 4.5 MVA of electricity every day, which can power 350,000 LED bulbs.

This project has been delivered by the Defence Infrastructure Organisation working with both the Crown Commercial Service and the private sector including EDF and Amey.

Minister for Defence People & Veterans Ellwood said: "RAF Marham is leading the way as Britain’s first green military airbase. The biogas fuel is a green and sustainable solution, helping us tackle climate change, support the local economy and save the  taxpayer money.

"I hope that this plant can act as a model and we can see more sustainable energy schemes rolled out across other military bases."

The biogas anaerobic digestion plant produces gas which is collected and used to power multiple generators that produce electricity. This reduce the Ministry of Defence’s carbon emissions by 14,000 tonnes of CO2 annually. The waste residue from this process can then be dried and used as fertiliser to help grow local crops.

Sam Ulyatt, Crown Commercial Services (CCS), Buildings Strategic Commercial Director, said: This is an excellent example of how CCS can work with public sector partners and suppliers to source power supply solutions for the Royal Air Force which provide resilience and strong green credentials, while boosting the local economy and providing energy security for the UK.

Philipp Lukas, Future Biogas MD, said: "It’s fantastic to see the UK military join the green revolution. If we are to combat the imminent global threat of climate change, everyone, from all walks of life, needs to transition to renewable, sustainable energy as quickly as possible.

"The plant in Swaffham now powers a significant local institution. In doing so, it not only helps secure the energy supply of a strategic national asset but also takes the pressure off the local electrical infrastructure, which has been really struggling to keep up with growing regional demand."

The Design Museum has chosen VIRTUE to help it maximise energy efficiencies and decrease electricity costs at its refurbished Kensington venue. The museum, which is...