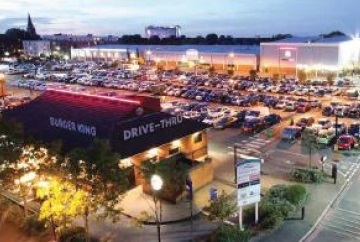 If you're looking for just one place for all you need to know about what's going on in the FM sector this week, look no further - plenty from retail and catering...while Interserve has served up some bad financials.

Corporate Facilities Services has been awarded the security guarding and cleaning contract at Leisure West Retail Park, based in Feltham.

As part of the contract award the site services team will now have site branded uniforms and also receive new radios, cleaning machinery and other support items to assist with the day to day management of the service provisions.

Leisure West Retail Park has a mixture of well know brand names such as Cineworld, Burger King, Pizza Hut, Gala Bingo, Ten Pin & many more and as such has a very busy night trade.

This is a further contract win for Sodexo’s new Schools by Sodexo offer, which brings together facilities management services, as well as a new modern school food brand, Food & Co. by Sodexo, following the announcement of the contract win with Wellspring Academy Trust last month.

The PFI contract is with ESSL (Education Services Swindon Ltd) and seven schools are part of the contract. These are two secondary schools (Abbey Park School and Nova Hreod), three primary schools (Red Oaks, Orchid Vale and Moredon) and two schools for pupils with severe learning difficulties (Brimble Hill and Uplands).  Four of the schools are situated on a single Learning Campus site, with the other three located separately in the Swindon Borough.  All of the schools are within four miles of Sodexo’s education business’s head office.

Services within the scope of the contract include catering, cleaning, premises management (caretaking and security), waste management, grounds maintenance, vending, helpdesk, utilities management, planned and reactive maintenance, winter services (snow and ice) and management of third party lettings. Most of these services will self-delivered by a team of 90 - 100 Sodexo staff, with Sodexo also employing some specialist contractors.

Sodexo were on hand to support the talented chefs of the future at Perth College UHI as they served up a 'Spring Time Awakening' dinner to invited VIPs and industry heads including Scotland’s Deputy First Minister John Swinney, recently.

The event marked the culmination of a Craft Skills Week mentored by Sodexo’s executive chef David Ward and supported by TV's Creme de la Creme winner and patisserie expert Helen Vaas and Sodexo Chef of the Year finalist Nikola Plhakova. Sodexo’s hospitality team from the Royal Botanic Garden Edinburgh provided students an insight into a range of industry skills with demonstrations on cocktail making, drinks service as well as supporting the dinner service.

More than 60 Food Studies and Hospitality students at the college had the opportunity to develop their skills through master classes and supplier demonstrations including game preparation and chocolate work.

Perth College UHI Sector Manager for Food Studies and Hospitality, Ian Gibb, explained: "The students were learning what the world of work will be like at the hands of the best in the business and seeing that there is nothing to fear from skills such as chocolate work. Once they have learned the techniques, their only limitation is their own imagination and ambition.”

Executive chef David Ward said, “We started the week with a group of students in a classroom and ended it with a team of potential chefs.”

Creativevents, Mitie's specialist outdoor catering business, has been awarded a contract to provide bar and food services at BBC Music's The Biggest Weekend.

Four festivals will take place at four sites over the four days of the late May Bank Holiday weekend (25-28 May). The Biggest Weekend will see BBC Radio 1, BBC Radio 2, BBC Radio 3 and BBC Radio 6 Music stations bring live music to crowds of over 175,000.

Creativevents delivered bar and food services at BBC Radio 1's Big Weekend in Hull in 2017. Following a competitive tender process, this relationship has expanded and Creativevents will be the single supplier at all four festival sites this summer.

You're A Star Super Star

For the sixth year in a row, ISS has achieved the highest possible rating on the IAOP Global Outsourcing Top 100 list.

Every year, the International Association of Outsourcing Professionals (IAOP) releases a ranking of global outsourcing companies across all industries. Again this year ISS received five stars – the highest rating possible.

ISS Group CEO Jeff Gravenhorst said: “As a company with 488,946 employees across more than 70 countries, the key to our success is the right balance between empowerment of our people and standardisation of our processes. Receiving five stars in IAOP’s rating demonstrates that our customers and industry peers recognise our success in this area – and underscores the strength of our value proposition.”

Notably, ISS scored an 8 out of 8 in Corporate Social Responsibility, compared with the industry average of 3.94.

Matthew Brabin CEO, ISS UK & Ireland said: “Our five star certification places us in the company of some the world’s leading brands so the rating really is a tremendous honour.

Interserve has announced that Non-Executive Director, Keith Ludeman, is to step down from the Board following the AGM on 12 June 2018.

Nick Salmon, who has served on the Board as Non-Executive Director since August 2014, is to succeed Ludeman as Chairman of the Remuneration Committee.

The international support services and construction group, reported this week (ending May 4) on a difficult year for the Group with its annual results for the year ended 31 December 2017.

Full debt refinancing has been secured with committed borrowing facilities of £834 million, through to 2021

Revenue stands at £3.25 billion, while operating profit was adversely impacted by poor performance in Support Services and Construction with continued good growth in Equipment Services.

Picture: Corporate Facilities Services has been awarded the security guarding and cleaning contract at Leisure West Retail Park, based in Feltham.