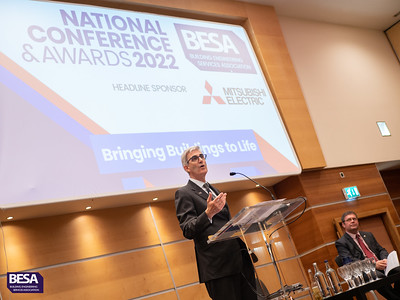 This year’s Building Engineering Services Association’s conference saw its highest-ever attendance, with 270 delegates and more than 400 guests gathering at the Novotel London West.

More than 50 speakers across three theatres addressed the conference theme: “Bringing buildings to life” from a wide variety of angles including current and future skills, the decarbonisation challenge, human health and well-being, and the implications of the country’s current economic challenges.

BESA CEO David Frise reminded the industry that its work was important  “because 90 per cent of us spend 90 per cent of our time in a building, so the social good that results from good building engineering services is massive”.

He also said the industry played a crucial role in people’s health and wellbeing. However, he added that the way we design and build led to “broken buildings…and broken people” with two suicides a day evidence of the pressure many construction workers face.

As a result, BESA supported the mental health charity Light House Club with a £10 donation for every delegate. BESA members were also able to attend the conference for free thanks to the high level of sponsorship received.

The keynote address was delivered by healthy building champion Professor Cath Noakes OBE from the University of Leeds. She said ventilation was the most overlooked building safety issue and stressed the importance of infection control being part of building designs.

She said the pandemic had led to greater collaboration with lots more sharing of knowledge and best-practice about making buildings more resilient to the transmission of diseases. “People realise we can’t solve this on our own or by arguing about whose tech is the best,” added Professor Noakes.

However, she warned that this winter would be very challenging because people would be looking to conserve energy by not opening windows, which could lead to other health problems linked to mould and damp.

The first one takes place on November 8 and will involve a series of in-person and online events. It is being driven by BESA, CIBSE and FETA in the UK in partnership with the United Nations Environment Programme (UNEP) and the Future Urban Ventilation Network.

Inclusivity in the Building Services Sector

Other highlights included a panel chaired by BESA President-Elect Claire Curran, about Women in Construction that welcomed the growing number of young women coming into the sector but said the building services sector needed to market itself better to attract its fair share of talent.

“A new generation of women are showing interest in careers where they can influence climate change so need to be directed our way,” said Lucy Sherburn of Fairheat.

“We need to point out that we are saving the plant…while many other careers are not.”

Alexandra Knight, Founder of the diversity initiative STEMazing, urged delegates to promote engineering careers in their local schools. She added that stereotypes needed to be challenged more aggressively including suggestions that STEM careers are not for women and that “you have to be amazing at maths”.

There was an open forum about a ground-breaking collaboration between the built environment’s leading professional bodies who are seeking to align the data standards used to manage costing, carbon and building and facilities maintenance, in a bid to clear up confusion and shift the digital focus from new build to whole life building performance.

The fact that BESA, CIBSE, RICS and NBS are working together on this with support from the Government Property Agency prompted one attendee to describe it as a “game changing moment for building maintenance and operation”.

Electrical Apprentice of the Year

Heating & Ventilation Apprentice of the Year

Customer Service Person of the Year

Contractor of the Year

Net-Zero Initiative of the Year

Product Innovation of the Year sponsored by The InstallerSHOW

Competence and Compliance Award sponsored by the BMTFA

National Apprentice of the Year

The BESA Conference was opened by the association’s president Neil Brackenridge who explained that the overall theme was “Building back better, safer,...

ThisWeekinFM is to be the official media partner for BESA's 2021 National Conference. The Building Engineering Services Association (BESA) has confirmed that...