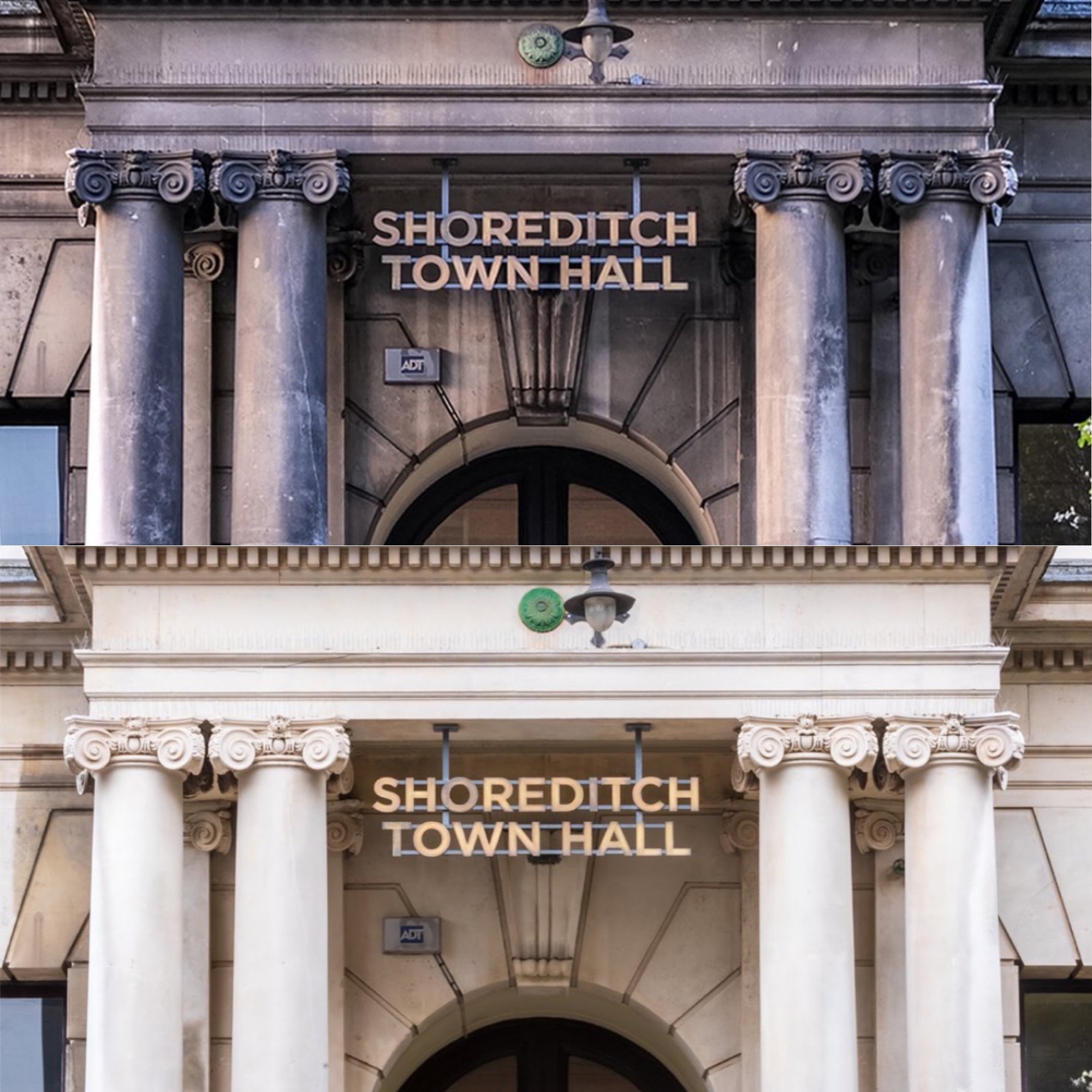 Shoreditch Town Hall has received its first exterior clean since it was built in 1866.

With a colourful history, surviving a huge fire and two world wars, today Shoreditch Town Hall is a destination arts, events and community space, having been rescued from the brink in the late 1990s. Its recent renaissance culminated in April 2021 with a complete façade clean by Thomann Hanry, the first exterior clean since it was built.

In the process, this magnificent Grade II Listed building has been restored to its original splendour, turning the clock back some 155 years.

Designed in Italianate style by Caesar Augustus Long and built in 1866, later to be extended in Edwardian baroque by William G Hunt at the turn of the 20th century, Shoreditch Town Hall is amongst London's finest examples of grand civic architecture. Adorned with its iconic statue of Progress, the building exemplifies the purposeful optimism of the era, its “More light, more power” motto - carved beneath the Shoreditch crest - encapsulating this forward-looking ethos.

From its opening in 1866, the Town Hall was the hub of local democracy and civic life for over a century. Its status as a political focal point was underlined by the arrest there of suffragette Sylvia Pankhurst in 1913. The Town Hall was also a hugely popular Music Hall venue from the late 19th century to the early 20th century, in spite of a catastrophic fire in 1904. Hosting the first-ever televised boxing match in 1955, it then became best known as a major boxing venue until 1975. Its subsequent decline into neglect during the 1980s was a sad fate for such a proud building with such a colourful history.

Picture: a photograph of the town hall before the exterior clean

Picture: a photograph of the town hall showing half of the building has been cleaned

Picture: a photograph of the finished project

Picture: a photograph showing a section of the town hall, before and after cleaning

In 1996 Shoreditch Town Hall was added to the English Heritage “Buildings at Risk” register, prompting a campaign to save this historic East London landmark. The Shoreditch Town Hall Trust took over the lease in 2002, marking a turning point in the building's history. With £2.3 million of capital investment, it has since been transformed, realising a dynamic vision for one of London's most important new arts, events and community spaces.

In spring 2021, London building restoration specialists Thomann-Hanry® were commissioned to clean the Town Hall's imposing Portland stone façade. With post-lockdown audiences due to return in June, it was important that the building should not be shrouded in scaffolding for months on end. For this reason façade gommage®, patented by Thomann-Hanry®, was the perfect solution. With all cleaning carried out from an agile hydraulic cabin, the entire 1500 square metre façade was cleaned by the four-man team in just eight days without a single pole of scaffolding to be seen. Projecting fine powders under low pressure across the contours of the façade, over a century and a half of accumulated dirt and grime were gently lifted away, revealing the face of the building as it first appeared in 1866.

James Pidgeon, Director & Chief Executive of Shoreditch Town Hall, today said: “It has long been an ambition of ours to properly clean and give some attention to the façade of our much-loved landmark building, and so I'm delighted that we're now able to start these works ahead of welcoming audiences back. The clean will no doubt have a transformative impact on the public's perception of the Town Hall, and is a fitting and timely reminder of our presence and future ambition as we fully emerge from the horror of the last 12 months and continue to serve artistic and local communities in Shoreditch, Hackney and beyond.”

Picture: a photograph of the town hall showing the top half uncleaned, and the bottom half treated