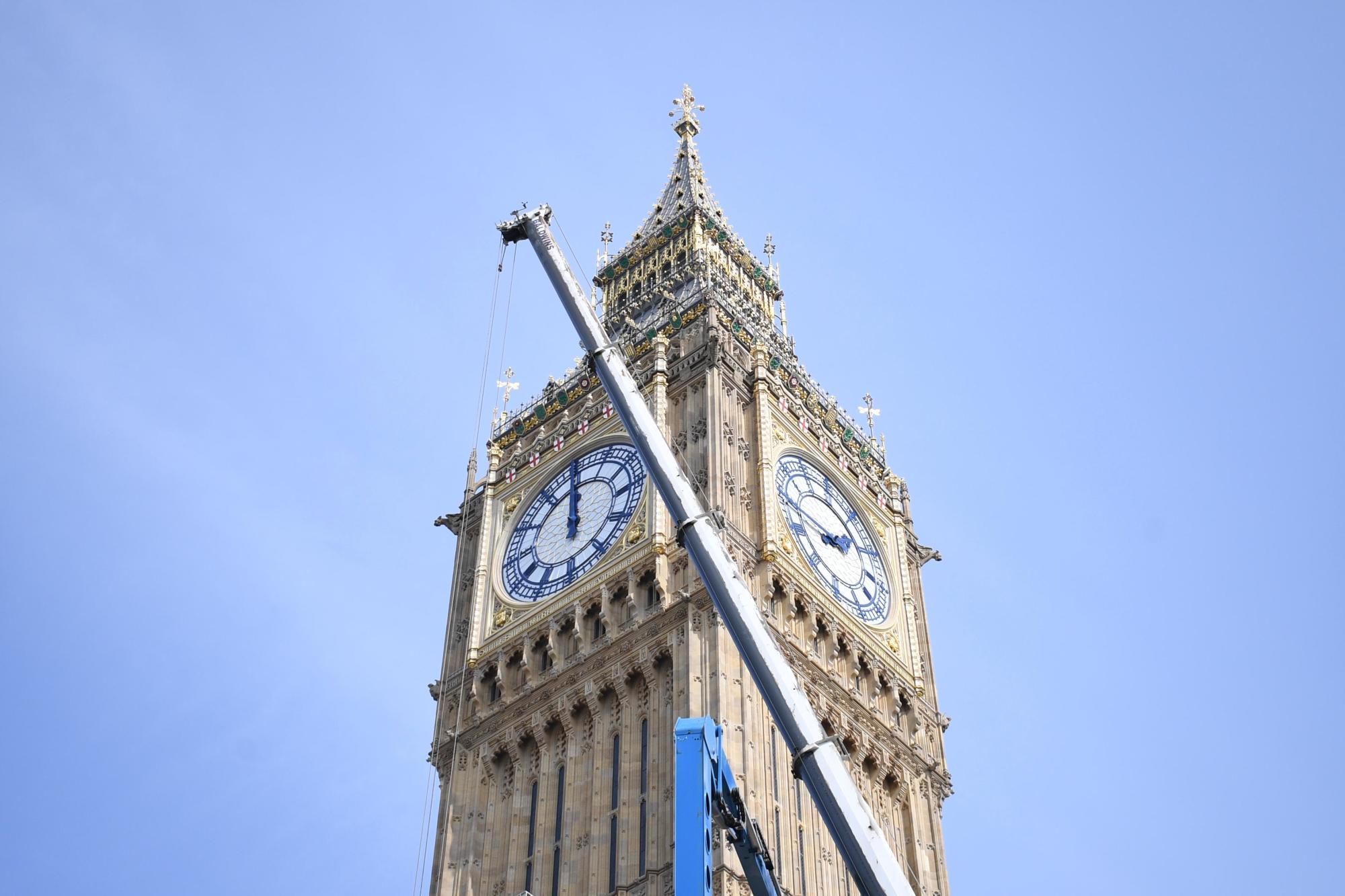 Big Ben is undergoing the biggest conservation in its history.

To ensure that the UK’s most famous clock continues to keep time, specialist teams carry out regular maintenance and adjustments to the Great Clock. However, it has been over 32 years since the last extensive works were carried out to maintain the clock and Elizabeth Tower.

Picture: a photograph of Big Ben with several cranes working on it. The image is taken from below and from the point of view of a nearby green space.  Image Credit: Images of the Elizabeth Tower are provided courtesy of ©UK Parliament/Jessica Taylor via an Attribution 3.0 Unported (CC BY 3.0) license.

Essential conservation work is close to completion, and has included:

Later this year the bells – including Big Ben itself – will be reconnected to the original Victorian clock mechanism and will ring out permanently once again. The gantry, which has protected the Palace of Westminster throughout the works and supported the complex scaffolding structure, is being removed over the Spring before the site is cleared in the Summer.

The work is separate from the restoration of The Houses of Parliament, a £4 billion project spanning access improvements, removal of cabling, stonework, asbestos removal and other extensive structural work.

Picture: a photograph of an operative working inside Big Ben. A large bell can be seen in the background. Image Credit: Images of the Elizabeth Tower are provided courtesy of ©UK Parliament/Jessica Taylor via an Attribution 3.0 Unported (CC BY 3.0) license.

By May, the Elizabeth Tower will be completely free of scaffolding, nearly four years after the entire structure was first fully enclosed.

The team will work to remove the gantry in stages, using similar methods to when the structure was first installed in 2017. An initial crane lift took place from New Palace Yard, in front of the Elizabeth Tower, from 24th March until 6th April.  Then, from 7th to 24th April, a larger crane will be positioned on Bridge Street to remove the remaining elements. The second crane lift will require the closure of Bridge Street to all traffic between those dates, though pedestrian access will be maintained.

The conservation project remains on schedule and in the coming months, the bells – including Big Ben itself – will be reconnected to the original Victorian clock mechanism, ringing out permanently once again.

Once the restoration has completed in the Summer and the site is cleared, Parliament will resume ownership of the building and start to prepare its internal spaces for future use, handing over to teams delivering the visitor experience. Preparations, including the installation and testing of exhibitions and tour routes, are expected to complete in the winter.

Internal works at the Elizabeth Tower

As exterior works draw to a close, important work is still underway inside the building.

Expert clock mechanics have been installing the Great Clock’s original Victorian mechanism for a number of months and important components are due to be fitted in the coming weeks. Dusty works are still ongoing in the ventilation shaft of the Tower, which has required the hands of the West Dial to be kept stationary. This is to prevent damage to both the hands and mechanism itself, though Parliament expects the clock dial to enter operational use towards the end of Spring once these works have completed.

In addition to the works taking place to the Great Clock, other elements are progressing well across the Tower, including the installation of key infrastructure components and fire safety systems - ensuring that this historic building conforms to current building regulations and is fit for 21st century use. The Ayrton Light – which shines when either House is sitting – completed structural repairs last year and has now received its new energy-efficient light fitting. This ‘greener’ Ayrton Light will then be connected to the power supply later in the spring.

Picture: a photograph of a team of three people working inside Big Ben, all wearing protective clothing. Image Credit: Images of the Elizabeth Tower are provided courtesy of ©UK Parliament/Jessica Taylor via an Attribution 3.0 Unported (CC BY 3.0) license.

Parliament to Mark Completion with a Celebration

Parliament is currently looking at ways to mark this important milestone for a treasured national icon, including providing updated educational resources, new retail offerings, as well as new talks and engagement activities - continuing the “People behind Big Ben” series that has been running since Spring 2021. Further details on the overall offering will be shared in the coming weeks.

Picture: a photograph of Big Ben with a crane working on it. Image Credit: Images of the Elizabeth Tower are provided courtesy of ©UK Parliament/Jessica Taylor via an Attribution 3.0 Unported (CC BY 3.0) license.