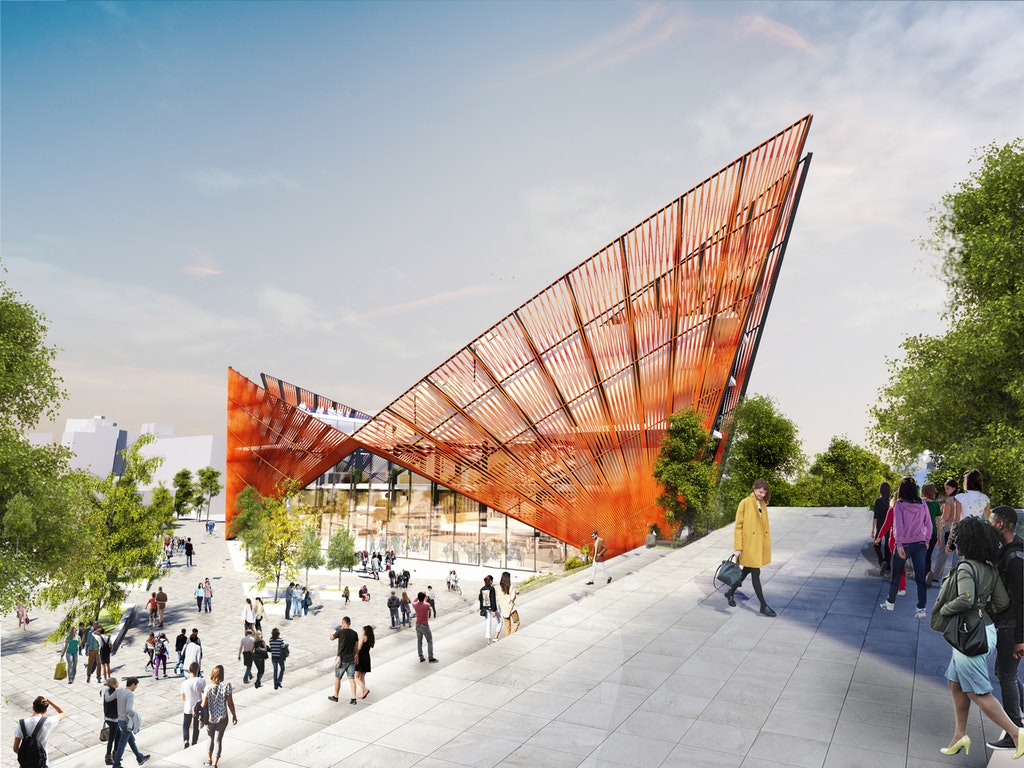 The competition winning designs for a new museum and art gallery in Swindon - taking the Frank Gehry designed Guggenheim Museum Bilbao (1997) as inspiration - have been revealed. Sadly, Heritage Lottery Funding has been denied...so it's not back to the drawing board - but this is an interesting cancelled project none-the-less.

The competition organisers believe the regeneration of towns and cities is often sparked by an architectural ‘hero’ project – a landmark scheme that changes perceptions to become a catalyst for investment.

Swindon Borough Council and the Swindon Museum and Art Gallery Trust wanted to reinvent the town’s art and heritage offer by building just that – a museum and art gallery to replace a current home which is no longer fit for purpose.

The fundamental curatorial and civic aim driving the design was to make the town’s substantial art, science and history resources available in highly stimulating, technically sophisticated surroundings. The gallery has a superb collection – one of the most remarkable of its type outside London, with more than 500 artworks by artists including Lucien Freud, LS Lowry, Paul Nash, Graham Sutherland, RB Kitaj, Ivon Hitchens and Gillian Ayres. Many of the artworks are loaned to national and international exhibitions.

The design brief for the project acknowledged that much of the fabric of the town of Swindon is less than memorable, so the new building was to be a distinctive and aspirational addition to the built environment that signalled bold architectural and placemaking intent. The building was to be capable of exhibiting the majority of Swindon’s modern art collection at any one time, in international museum standard conditions.

Jason Parker, lead architect, said: “The design aimed to produce Swindon’s civic ‘living room’ – a really open and inviting gallery that showcases art and historic objects that are precious to the town in a relaxed and engaging atmosphere. We see the building as an exuberant architectural artefact in itself, with orthogonal galleries and functionally flexible spaces within a very robust and largely exposed steel structure, a rainscreen of metal mesh whose spire-like sections point north and south, symbolically connecting Swindon’s old and new towns. It is very much in the spirit of the great engineering works of Isambard Kingdom Brunel, who built his locomotive workshops and historically important Railway Village in Swindon in 1842.”

The 7-level structure, developed with Arup, Steenson Varming and Alinea, was to stand immediately north of the Wyvern Theatre, on what is now a large car park. The Council and the Trust wanted the museum to be a place for people to meet or relax, whether or not they visit the galleries. And so the architecture had to be able to generate footfall and energy in the streets around the 3,600sq.m town centre site.

The gallery is designed to activate a new landscaped public space that connects to and emphasises the Wyvern Theatre. The two lowest levels – the more or less transparent ‘living room’ element – of the design are visible within glazed arches that face the public realm on four sides of the building. The ground and mezzanine levels contain the reception and temporary exhibition spaces for local art, items from the museum collection, an activities workshop and offices.

Above this, on levels 2 and 3, held in a structure whose elevations resemble two canted, differently sized triangles, are two galleries and a learning centre – all with access to open-air terraces that can be used as sculpture gardens. The individual gallery areas are 200-400sq.m.

The top levels, 3 and 4, are designed to house a restaurant, event space and roof garden with excellent views over the town. Two lift and service cores rise through the plan at the mid-points of the level 4 garden deck, and the roof garden on level 7.

The project made it through to the final stages of Heritage Lottery Funding but was declined funding in May 2018.

Jason Parker added: “We are obviously disappointed that the funding wasn’t secured for our vision for Swindon, but it was an incredible process to be part of. It was a real privilege to work alongside people so committed to Swindon and to galvanise opinion and sow a seed of how the city could be seen in a new way. Despite this project not going forward we hope those ambitions – to use the built environment as a vehicle for community and investment and regeneration – continue.”

Picture: For all sad words of tongue and pen, the saddest are these - it might have been.

A Central Resource for Growing Talent for FM

The January FMCentral event at the Silverstone’s Formula One Circuit focused on Recruitment and Skills Development in the FM Sector; an issue that nearly every...