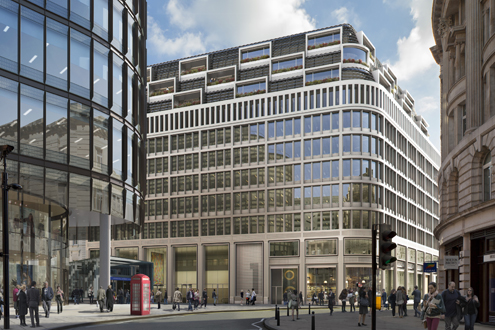 Eric Parry Architects, the team behind the proposed tallest building in the Square Mile, have also been instrumental in obtaining planning permission for 1 Liverpool Street.

The firm have designed and been involved in seeking planning permission for The Trellis (or 1 Undershaft), which will be second in height only to The Shard (which sits outside of the Sq Mile but is the tallest building in Western Europe). They got the OK from the Corporation of London just weeks before helping get the OK for The Trellis. 1 Liverpool Street will be 'an animated civic backdrop to Finsbury Circus and a new public space on Liverpool Street' according to Eric Parry.

The façade will be of painted cast and fabricated metal providing an interpretation of the architecture of Finsbury Circus and Liverpool Street Station whilst mediating with the contemporary Broadgate Estate to the north.

The plan is to develop an OSD (Crossrail Over Site Development) with a 10 storey office building with 260,000sq.ft of office and 6,620sq.ft of retail space.

This project also involves Aviva Investors Ltd, this time in partnership with Transport for London (TfL).

Alistair Moss, chair of the Planning and Transportation Committee said of the proposals: “The redevelopment plans approved in November will strengthen the already strong retail and office offer in the Liverpool Street area of the city consolidating our already world beating financial and professional services presence"