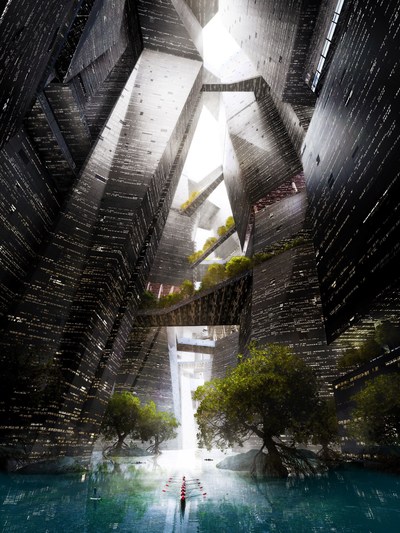 First announced in January 2021 by His Royal Highness Mohammed bin Salman, Crown Prince of Saudi Arabia and Chair of the NEOM Company Board of Directors, THE LINE is a smart-city experiment beyond the scope of anything presently utilised on this scale.

The plans are for a 170km belt of hyper-connected future communities, without cars and roads and built around nature, which is a direct response to some of the most pressing obstacles facing humanity today such as legacy infrastructure, pollution, traffic, and human congestion. 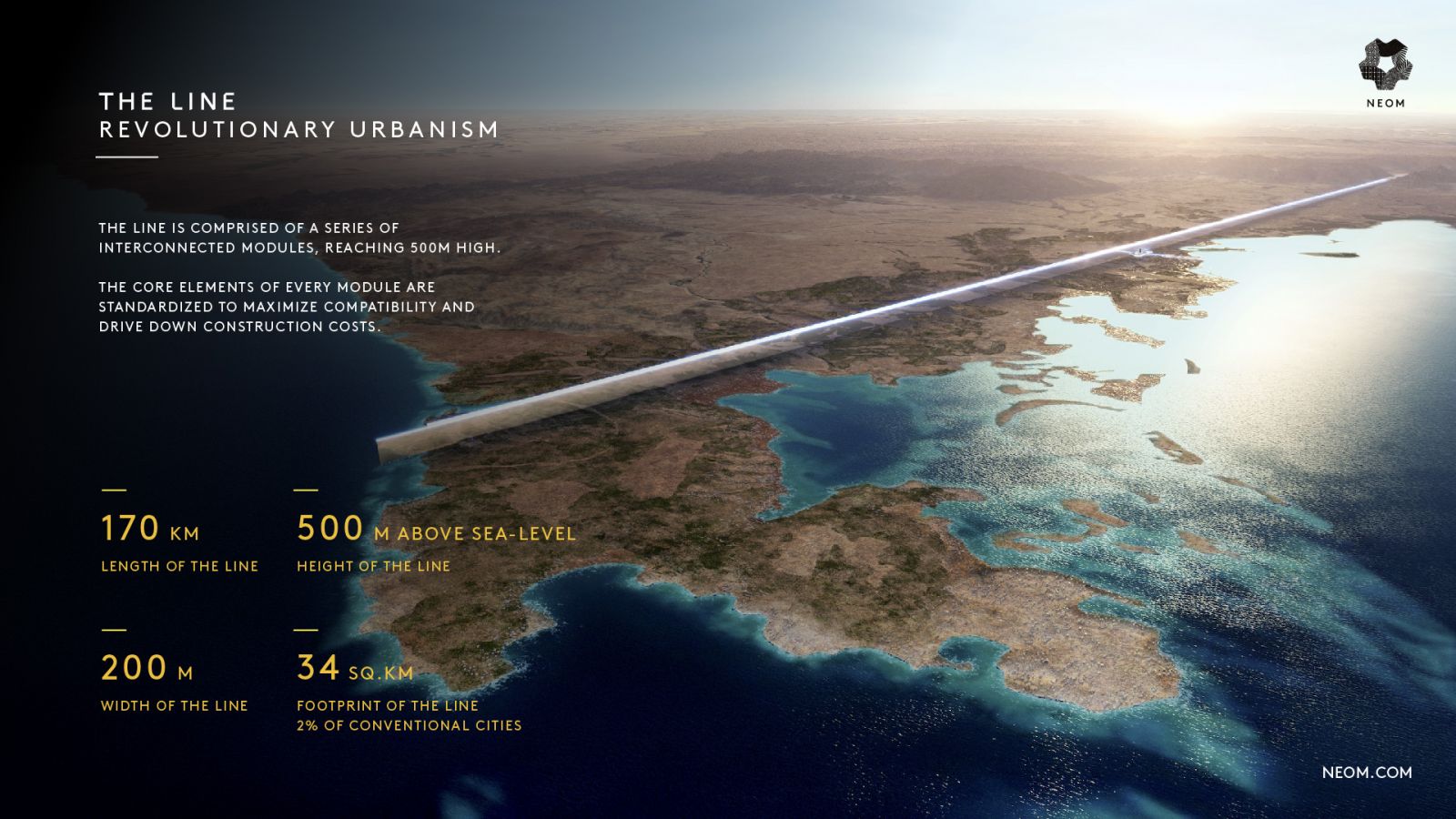 It is intended that the structure and its processes will run on 100 per cent renewable energy and prioritise people's health and well-being over transportation and infrastructure as in traditional cities. THE LINE will eventually accommodate 9 million residents and will be built on a footprint of 34 Km2, which is unheard of when compared to other cities of similar capacity.

The project is built upon the idea of layering city functions vertically while giving people the possibility of moving seamlessly in three dimensions - up, down or across - to access them is a concept referred to as Zero Gravity Urbanism.

Different from just tall buildings, this involves layering public parks and pedestrian areas, schools, homes and places for work, so that one can move effortlessly to reach all daily needs within five minutes walk, in addition to a high-speed rail with an end-to-end transit of 20 minutes. 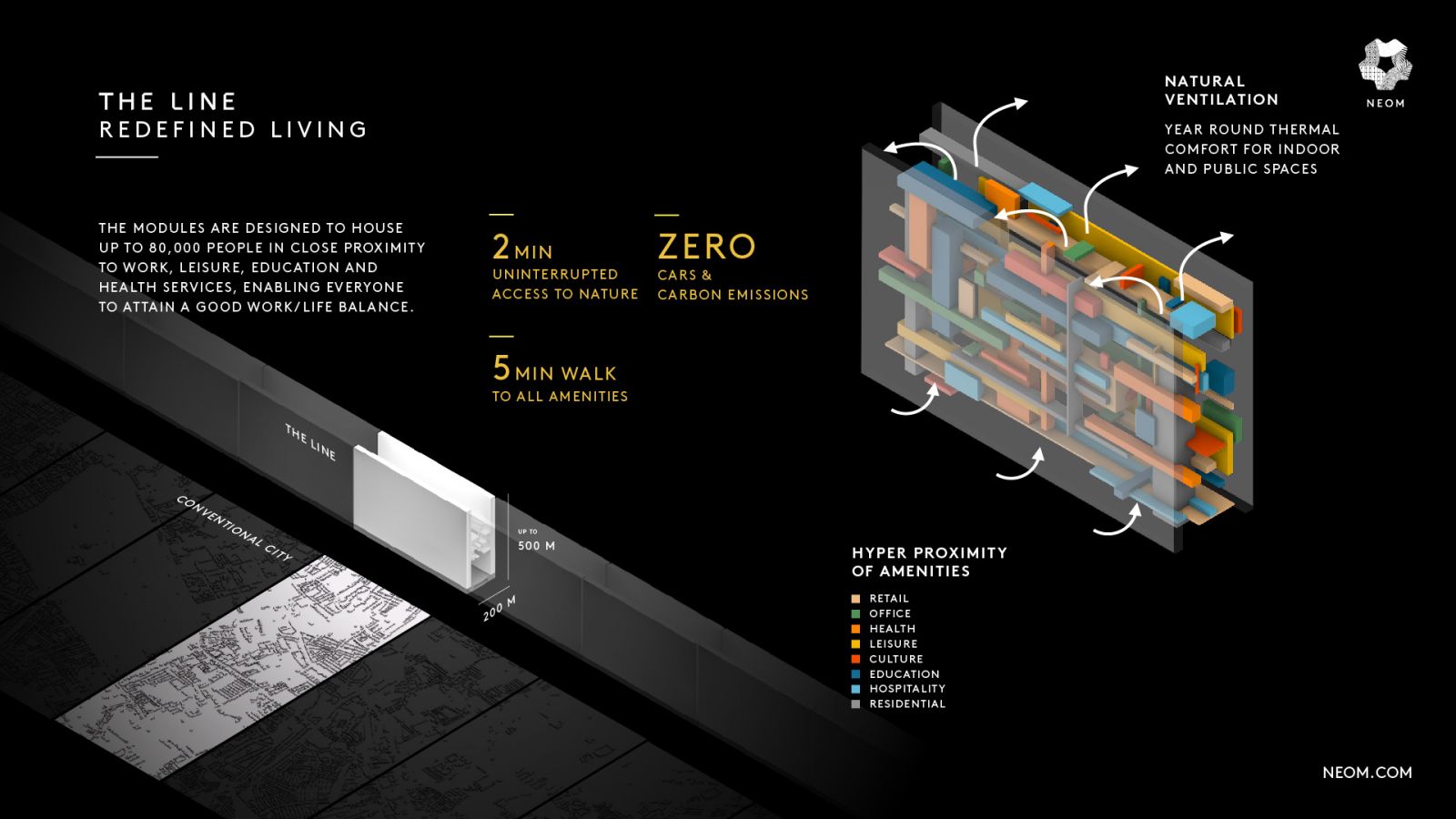 NEOM claim that this is the first time in 150 years that a major urban development has been designed around people, not roads. A cornerstone of Saudi Vision 2030 and an economic engine for the Kingdom, it will drive diversification and aims to contribute 380,000 jobs in the future. Saudi Vision 2030 is a programme of national advancement developed by the Crown Prince and the current government, setting out grand goals for public infrastructure, health, education, tourism and recreation by the end of this decade. The framework also focuses on reducing Saudi Arabia's dependence on oil and providing opportunities for future generations.

The announcement of THE LINE's designs is a continuation of NEOM's progress in the development of its flagship projects such as OXAGON, its reimagined manufacturing and innovation city, and TROJENA, its global mountain tourism destination.

A Global Opportunity for Collaboration

NEOM has already begun to sign contracts internationally in advance of the building process. Starting in the west at the Gulf of Aqaba and terminating at the NEOM International Airport within the upper valley region, THE LINE is subdivided into around 135 modules, according to a statement. Each module contains eight buildings founded on large-diameter bored piles.

UK-based geotechnical specialist Keller has signed an umbrella Framework Agreement with respect to the project and is mobilising for an anticipated first works order which has an expected value of around £50m, with the work anticipated to be completed within the next twelve months. Further works orders are expected to be awarded later in the year on subsequent modules.

At the announcement of the concept in 2021, His Royal Highness said: "Throughout history, cities were built to protect their citizens. After the Industrial Revolution, cities prioritized machines, cars and factories over people. In cities that are viewed as the world's most advanced, people spend years of their lives commuting. By 2050 [the year of Net Zero target set by the UK government], commute durations will double. By 2050, one billion people will have to relocate due to rising CO2 emissions and sea levels. 90 per cent of people breathe polluted air. Why should we sacrifice nature for the sake of development? Why should seven million people die every year because of pollution? Why should we lose one million people every year due to traffic accidents? And why should we accept wasting years of our lives commuting?"

A year later, when revealing blueprints and infographics to the public, he added: "The designs revealed today for the city's vertically layered communities will challenge the traditional flat, horizontal cities and create a model for nature preservation and enhanced human livability. THE LINE will tackle the challenges facing humanity in urban life today and will shine a light on alternative ways to live."

Picture: a CGI imagination of THE LINE. Image credit: NEOM.