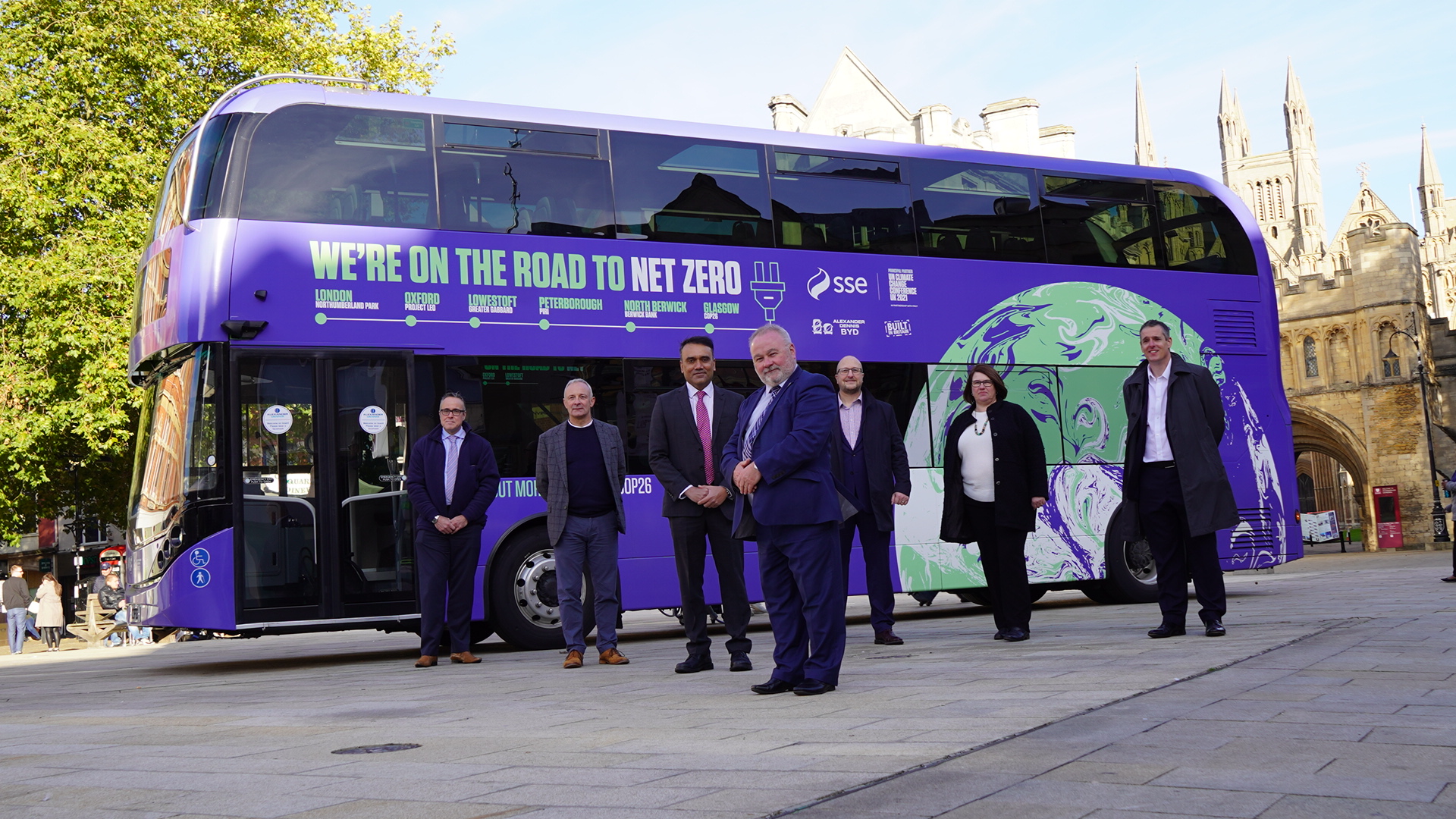 Plans for Peterborough, one of the UK’s fastest growing cities, to adopt a smart energy system have reached their halfway point.

The Mayor of Peterborough, Councillor Stephen Lane, and Peterborough City Council leader, Councillor Wayne Fitzgerald, were among the local leaders who celebrated the milestone at an event on 21 October to welcome an electric double-decker bus into the city on its national clean energy tour of the UK in the run-up to COP26.

The Peterborough Integrated Renewables Infrastructure project (PIRI) estimates it will cut 80-90 per cent of CO2 emissions over forty years whilst reducing energy bills by up to a quarter by 2030.

PIRI project partners gathered to welcome the electric bus on its nationwide tour of the UK’s most innovative clean energy projects ahead of the COP26 summit in Glasgow. Attendees included Councillor Nigel Simons, cabinet member for waste, street scene and the environment, and David Brend, Director of Business Development at SSE Energy Solutions.

As the fourth stop on the ‘Road to Renewables' tour organised by renewable energy leader SSE and bus manufacturer Alexander Dennis, the COP26 branded bus stopped off in Peterborough’s Cathedral Square to mark the city’s role in helping the UK meet its net zero goals.

Nathan Sanders, Managing Director at SSE Energy Solutions said: “PIRI is a perfect example of the type of innovation and collaboration we need to get local communities to net zero. The project combines a next generation heat network, electricity network and EV infrastructure under one holistic scheme, taking a ‘whole systems’ approach that will optimise carbon reduction and cost savings.

“At SSE Energy Solutions we are very proud to be part of this pioneering initiative that will serve as a blueprint to decarbonise UK cities, and which we are celebrating today on our "Road to Renewables" journey to COP26.”

“In response to Peterborough’s rapidly growing economy, PIRI is focussed on developing “enabling infrastructure”, preparing the city for an electrified future and opening the door for other technologies such as green hydrogen. The low carbon, smart energy system will enable Peterborough to expand whilst reducing its carbon footprint and energy costs.”

Dr Tanja Groth, Director of Urban Resilience at Sweco UK and PIRI Partner said: “This pace of change is unheard of in the energy sector. PIRI is delivering a design for an integrated energy system within three years, incorporating low carbon electricity, heating and transport. In comparison, designing a district heating system alone would typically take between five and six years. Peterborough is proving that it is possible to complete a smart city design at pace and at scale, laying the groundwork for other cities to follow.”

PIRI is the largest smart city energy regeneration scheme in the UK, aiming to deliver a significant drop in CO2 emissions by 2030. Results from a study into the feasibility of the ambitious plans has identified 80GWh of annual electricity needs and 25GWh of heat demand that can be connected to a low carbon power network by 2030.

Councillor Wayne Fitzgerald, Leader of Peterborough City Council said: “By working closely with our partners, we have been able to design a system that is changing what was believed to be possible when creating a fully integrated, clean energy system at scale. We hope our findings can be rolled out in cities across the UK and are pleased to be demonstrating our progress today on the nationwide ‘Road to Renewables’ tour.”

Unlike other large-scale energy projects, PIRI is planning to embed thermal and electric storage and flexibility into the initial design. This means it will be possible to mix and match available supply to demand across heating, electricity and transport, rather than keeping complex energy requirements in silos. By taking this agile, integrated approach, it will be easier to incorporate new renewable energy resources as they become viable in future years. This will allow the city to respond to changes in demand such as a rapid uptake of electric vehicles and growing population.

PIRI is being led by Peterborough City Council, working with partners that include SSE Energy Solutions, Element Energy, Cranfield University, Smarter Grid Solutions and Sweco UK.  The two-year project has been granted funding from UK Research and Innovation, alongside corporate investment to design a low carbon, smart energy system for the city.

More than 50,000 schools around the world will be able to access details of the PIRI project and learn about clean energy systems as part of COP26 educational resources being developed by Cranfield University and Futurum.

SSE is a major partner at COP26; and alongside the Go-Ahead Group, Alexander Dennis, BYD and SWARCO Smart Charging is using the electric bus tour to showcase examples of the national effort already underway to decarbonise energy. The bus, which is a BYD ADL Enviro400EV electric double decker, was built in Britain by Alexander Dennis and BYD.

The ‘Road to Renewables’ tour kicked off in Northumberland Park electric bus depot in London on Monday 18 October and will take in projects in Oxfordshire, Suffolk, Peterborough, Manchester, Nottingham, Harrogate, Newcastle and North Berwick before concluding in Caledonia bus depot in Glasgow on Friday 29th October. To track the bus’ journey, follow SSE Energy Solutions on Twitter @SSEB2B or the hashtag #RoadtoRenewables.