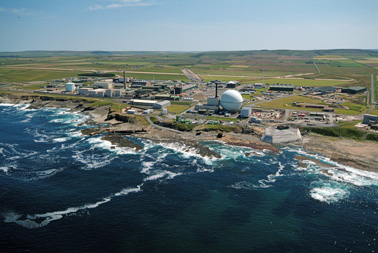 Dounreay Site Restoration has awarded six framework contracts to be carried out on behalf of the Nuclear Decommissioning Authority as part of a decommissioning services framework for Scotland’s oldest nuclear reactor.

The framework, worth up to £400 million and initially set-up for up to four years, with the possibility of extensions of up to an additional three years, will take work at the site into a new phase when historic wastes from the shaft, silo and low-level waste pits are due to be retrieved, repackaged and consigned to modern waste facilities.

Stephen Adamson, DSRL Head of Commercial Services, said: “This agreement will deliver real and visible signs of progress towards achieving our mission. It is about forming long-term partnerships so that the successful companies can work alongside our own Dounreay staff, ensuring a first-class team combining the best site skills and experience with the wider industry knowledge and innovation that the supply chain can offer.”

Construction of a size reduction facility, shaft and silo decommissioning and demolition of historic active laboratories are just some of the projects expected to be delivered.

The 31 organisations so far appointed to Dounreay Site Restoration decommissioning services framework are:

In recent years a focus on the nuclear sector has seen th first company on the list, Graham, commissioned to work on several highly complex, safety-critical design and construction projects on storage and disposal facilities across the UK.

Steve Beattie, Graham Contracts Director at Dounreay said: “We are looking forward to working in partnership with Nuvia, Oxford Technologies and Thompson of Prudhoe on this significant project. Our knowledge of the Dounreay site is already extensive as we recently completed a grout plant facility and constructed two low level waste vaults involving the total excavation of 243,000 cubic metres of rock.

The site’s decommissioning is now well underway, and Graham is playing a key role in what is widely recognised as one of Europe’s most challenging nuclear closure programmes.”

Picture: An aerial view of the Dounreay nuclear facility.

CHP Good Enough For The Crown

A combined heat and power system has been completed at Crown Place Norwich which has been converted by Crown Student Living into student accommodation. Helec was...