A Powerfully Busy Week for Battersea 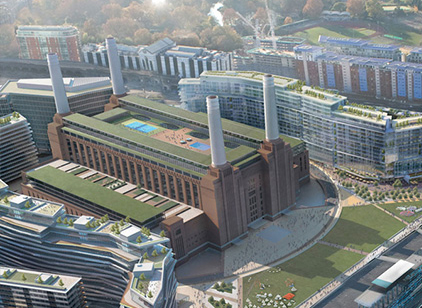 For the last 30 years or so, passing Battersea Power Station by the Thames, has been a dispiriting experience. Whether by the river or train, its derelict structure has been crying out for attention since it closed as a coal fired facility in 1982 and was decommissioned in 1983.

A number of potential owners have promised much and then scurried away but now it seems that something is going to happen on a vast scale to transform its fortunes as a backdrop for the odd pop concert or film.

It was unintentionally the scene of attention of the wrong sort when fire fighters arrived this week because a television stunt, promoting Bear Grylls’ new show on Discovery Channel, projected ‘flames’ on to the structure, leading to fears that a real conflagration was happening.

More peacefully, last weekend was the last chance for the public to see inside the Grade II structure before the £8 billion redevelopment and 18,000 took the opportunity to do so. It was part of Open House London weekend when 700 venues were opened to the general public.

A Malaysian consortium has bought the 39 acre site and building and over the next 10 years, plans to construct 3,500 homes, offices, shops and a park, generating 15,000 jobs in the process. The London Underground will be involved, opening a station on the Northern Line there for an estimated population of 28,000 to access. In July this year the group confirmed that 841 homes at the development, with a value of £685 million, already sold.

There are ambitious that will see the restoration of the famous art deco structure internally and externally, the reconstruction of the chimneys as well as refurbishment of the cranes and jetty as a new river taxi stop.