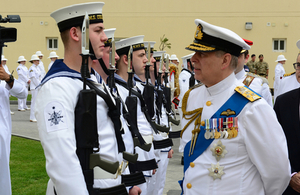 New building performance standards have been targeted to save the MoD millions of pounds. The Defence Infrastructure Organisation (DIO), which manages the defence estate, has published the standards which are expected to save the taxpayer between 15 and 20% on MoD construction programmes.

The DIO delivers accommodation, training facilities and critical assets such as runways and workshops to enable the armed forces to live, work, train and deploy. Recent DIO projects include building a jetty at Portsmouth Naval Base so the aircraft carrier HMS Queen Elizabeth can dock and resurfacing runways at RAF Akrotiri, RAF Gibraltar and RAF Valley.

The defence estate is large, diverse and widely dispersed across the UK and overseas. In the UK, it covers around 230,000 hectares comprising military training areas, naval bases, barracks, airfields, supply depots and offices. Construction on these sites is sometimes subject to specific defence requirements but the majority is similar to other sectors, so the new standards have been developed in accordance with comparators from industry and other government departments. They are designed to be used by MoD staff and industry partners responsible for the planning, costing and delivery of the infrastructure assets and projects funded by MoD.

The new Joint Services Publication 315 is expected to save by creating efficient standards, enabling faster and more cost-effective project development and delivery. They also recognise the success and cost savings DIO has achieved in recent years from increasing the use of modular construction and standardisation of designs, as well as utilising 3D digital and interactive technology.

Graham Dalton, DIO’s Chief Executive, said: "The revised standards make it absolutely clear what our requirements are and will contribute to a significant cost and time saving on our infrastructure projects. The new standards and supporting guidance set a series of reference designs for specific defence infrastructure requirements and benchmark capital and operational costs for the planning and delivery of MOD infrastructure.

Britain has cemented its enhanced and permanent presence in the Gulf with the opening of the United Kingdom Naval Support Facility at a ceremony at Mina Salman port in Bahrain in early April.

The Naval Support Facility will play a central role in the UK’s ability to operate in the region, and will be the hub of the Royal Navy’s operations in the Gulf, Red Sea and Indian Ocean.