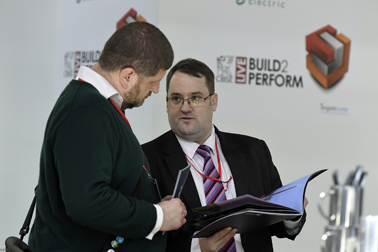 Some two thousand delegates packed into London’s Olympia last week for the second Build2Perform Live event to be staged by the Chartered Institution of Building Services Engineers (CIBSE).

Now established as one of the central events for all professionals involved in improving the performance of the built environment, the diverse programme reflected the range of expertise incorporated within CIBSE.

Digital design was a recurrent theme, with awards presented by the Society for Digital Engineering and the Building Simulation Group. The use of digital design featured in practical applications from using building controls to maximize the efficiency of building management to evaluating the impact of indoor air quality on cognitive performance.

Climate change was another underlying theme with the sessions focused on developing resilient cities and managing water resources reflecting the need to adapt to 'new normal' weather patterns.

Decarbonisation is a logical partner to climate change discussion and thought-provoking sessions considered the development of carbon-free heat sources and buildings that generate their own energy. Some blue-sky thinking looked at the use of hydrogen as a fuel of the future – with this session reflecting on the potential for hydrogen to act as a seasonal energy storage resource.

Alongside future thinking and innovation came purely practical sessions discussing upskilling and competency, renovation of existing and historic buildings and the development of effective maintenance programmes.

The legislation update focused on current activity around the building regulations. It was confirmed that government will review the case for further controls on overheating in buildings as well as looking at Part L and the Grand Challenges of halving energy use in new buildings, increasing people’s ability to live independently at home and eliminating emissions from cars.

As the doors closed on these two vibrant and energizing days, CIBSE’s Rowan Crowley reflected on the importance of this type of event. “Despite the huge choice of communication technology, something quite different is produced when people actually get together.

“The buzz around the hall here is not only from the seminar sessions, just as important are the conversations that take place in the corridors and coffee bars, continuing to explore the themes, challenges and solutions presented by the experts who give their time to share their insights.”

For those unable to attend the event, many of the presentations given throughout the event will be available for download from the Build2Perform website.

Picture: Delegates flocked to the Build2Perform Live event to be staged by CIBSE.

In recognition of providing exceptional standards of health and safety, Jaguar have been awarded the ISO 45001 certification. Click Image To Read More