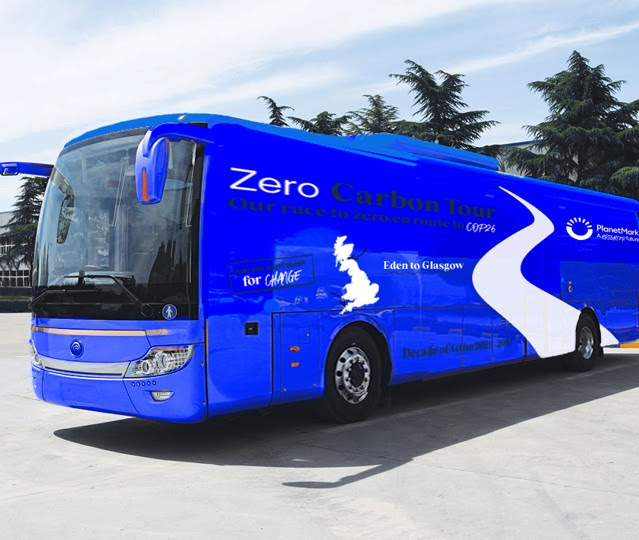 An ambitious Zero Carbon UK Tour, organised by sustainability certification Planet Mark, was announced yesterday during an online event attended by The Rt Hon The Lord Mayor of the City of London, Alderman William Russell. The tour will start virtually in May before hitting the road for live events in the UK's first fully electric Carbon Battle Bus, launching in June, and culminating at COP26 in Glasgow in November.

The UK has set a net zero carbon target for 2050. While 45 per cent of FTSE 100 companies have committed to achieving net zero by 2050 or sooner, only 16 per cent have a plan on how they will achieve it. Other FTSE companies require support to address the knowledge gap, helping to ensure that widespread net zero carbon commitments are rolled out alongside robust and credible plans for organisations of all sizes.

Tour for Education and Inspiration

"By embarking on our Zero Carbon Tour, we want to accelerate information and action to enable businesses to set zero carbon targets and implement achievable steps to deliver them.

Planet Mark’s eight-month tour aims to address this by taking the net zero carbon message to communities across the UK in support of the UN-backed Race to Zero campaign, the world’s largest alliance of actors committed to halving global emissions by 2030 and achieving net zero emissions by 2050 at the latest. It will highlight how businesses can set their own credible net zero carbon targets in line with Race to Zero’s rigorous minimum criteria and implement plans to achieve them.

The virtual tour will take place fortnightly from May, while the Carbon Battle Bus will take to the road in June at the Eden Project in Cornwall, where Planet Mark’s journey began in 2013, to coincide with the G7 summit (11-13 June). The Carbon Battle Bus, which is fully electric and will be charged en route, will then travel to London with a series of zero carbon events along the way.

The final leg of the tour will visit farms, schools and trading estates on the road north to COP26 in Glasgow, where Planet Mark will highlight and celebrate the steps taken by the business community in tackling carbon. Additional routes may be added throughout the summer.

The physical stop-offs during the tour will provide everything a business needs to know to go net zero through free-to-attend carbon clinics as well as paid-for Net Zero Essentials workshops, which will give participants the tools and knowledge to join Race to Zero with a robust net zero target and an action plan to support it. The tour will also include press events and networking opportunities to help support businesses to get started on their sustainability journeys.

A main point for discussion on the journey is the difference between striving for carbon neutral goals versus net zero goals. From a public CSR perspective, carbon neutrality is often used as a focal point for sustainable business. The issue with this approach alone is that it relies on carbon offset rather than truly sustainable practice and development, meaning that companies can buy into programs that counteract their impact.

The investment in carbon capture and renewable infrastructure elsewhere is important, but so is gradually improving the way we operate here and now. Andrew Griffiths, Client Relationship Director at Planet Mark put it well – “carbon neutrality is a step along the road to net zero”. If businesses continue to operate unsustainably and simply offset that, we are working in a non-progressive deficit rather than building a better future. Net Zero goals are set to reduce all emissions and ideally only offset the unavoidable.

There are three scopes of emissions: direct, indirect, and indirect from sources out of their controls i.e. suppliers, associates, and necessary services. The third is usually the largest category, as it can include so much of a wider network, but is also the scope with the largest potential for positive growth by encouraging connections to make progress, and in working together in the Race to Zero. Unlike other races, this is one that everyone needs to finish, and no one can afford to lose.

As this is all about collaborating for prospects, the physical tour will include Sustainability Open Mic sessions, featuring a local host business. This will be a chance to learn and contribute knowledge about implementing processes to reach the goals, overcoming hurdles in financing and actioning those plans. Childbase and Rowlinson are two such companies that work with Planet Mark to encourage CSR in their sectors and other.

Childbase is a leader in early years education, which is notable because they are supporting the generation that this makes the most difference for. They were the first in the UK to fully publish their Carbon Footprint, and have managed to bring their Net Zero target forward to 2030.

Rowlinson are a leading supplier of school uniform – they recycle 80 per cent of their UK waste and are looking to have all primary suppliers planet mark certified by 2022, which requires a 50 per cent reduction in emissions per year. Both organisations are employee owned.

The tour website will display an interactive digital map, which will plot the route of the virtual and physical journey and enable booking onto local events. The website will also include links to book participation in tour events. It will incorporate a pledge wall, where businesses can display their commitments to reaching zero carbon emissions.

Steve Malkin, CEO and founder of Planet Mark, says, “This is a key moment in time, and we are aiming to give energy and impetus to the urgency of tackling the climate crisis. By embarking on our ‘Zero Carbon Tour’, we want to accelerate information and action to enable businesses to set zero carbon targets and implement achievable steps to deliver them. Net zero brings more urgency and more opportunity for organisations to work together to tackle the climate crisis. In doing so, they are publicly demonstrating their commitments that they are organisations and brands that are here to support society and our transition to net zero.  It's an exciting time of innovation and action with the goal of a cleaner, healthier planet within our reach.”

He adds, “COP26 is incredibly important, as it places the UK at the forefront of decarbonisation to address the urgent and immediate requirement to take action for the good of society and our planet. Aligned with this, Planet Mark is supporting the United Nations ‘Race to Zero’ campaign as part of the Government’s aim to sign up over a hundred thousand businesses to this initiative. Change is in our hands and we want this tour to communicate that as businesses and individuals, together we are empowering change for a brighter future. With enough ambition and active collaboration, now is the time to solve one of the most pressing challenges we face as a generation.”

In another of our EMEX Focus Interview series, we welcome Phoebe Baker, Account Manager from Pilot Group.​ The Pilot Group help businesses to be more...

NuServe is only the second UK facilities management company to achieve the B Corporation (B Corp) certification, for meeting rigorous social and environmental...