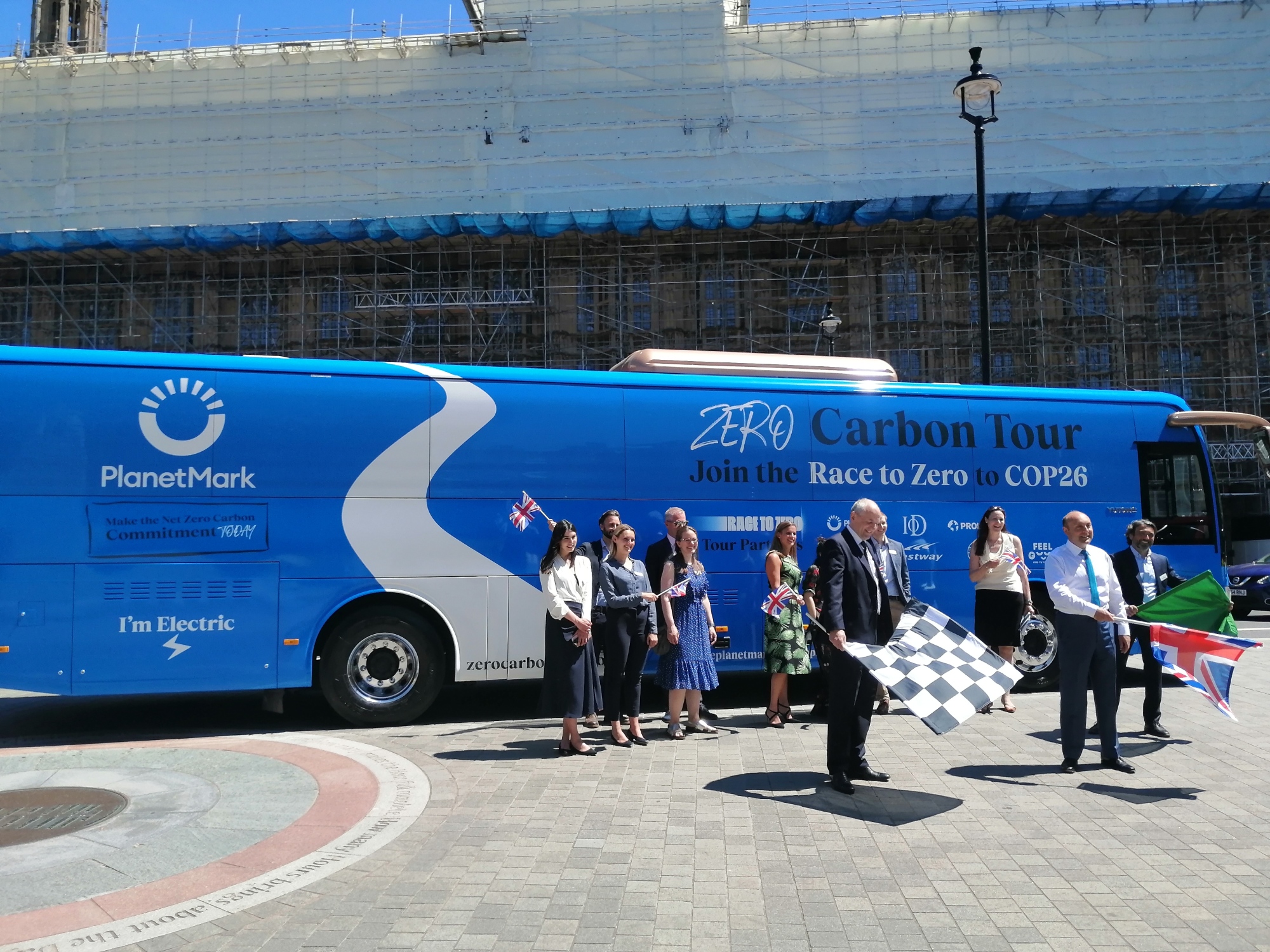 Its Net Zero week in the UK, highlighting the ever-increasing urgency to reach climate-conscious targets surrounding the carbon footprints of our organisations and buildings. Highways England have published their plans to improve the impact of our national road travel network, and Planet Mark continues their tour with support from the UN-backed Race to Zero global campaign.

After a year that has seen symbolic troughs in emissions due to widespread lockdowns and environmental flourish during the lapse in human interference, many companies have been encouraged to take the opportunity of downtime to readdress their corporate social responsibility commitments.

"We hope that by demystifying net-zero and demonstrating how companies can take tangible actions and embark on their own zero-carbon journeys, more businesses will join us to create a brighter future for all.”

What is Net Zero?

Net-zero refers to the point at which all carbon emissions are eliminated or offset, in efforts to quit contributing to the inertia of climate change, which is predicted to affect the wellbeing of humanity globally. The UK has set a net zero carbon target for 2050. While 45 per cent of FTSE 100 companies have committed to achieving net-zero by 2050 or sooner, only 16 per cent have a plan on how they will achieve it. Other FTSE companies require support to address the knowledge gap, helping to ensure that widespread net-zero carbon commitments are rolled out alongside robust and credible plans for organisations of all sizes.

A main point for discussion on the journey is the difference between striving for carbon neutral goals versus net-zero goals. From a public CSR perspective, carbon neutrality is often used as a focal point for sustainable business. The issue with this approach alone is that it relies on carbon offset rather than truly sustainable practice and development, meaning that companies can buy into programs that counteract their impact.

The investment in carbon capture and renewable infrastructure elsewhere is important, but so is gradually improving the way we operate here and now. Andrew Griffiths, Client Relationship Director at Planet Mark put it well – “carbon neutrality is a step along the road to net-zero”. If businesses continue to operate unsustainably and simply offset that, we are working in a non-progressive deficit rather than building a better future. Net Zero goals are set to reduce all emissions and ideally only offset the unavoidable.

There are three scopes of carbon emissions: direct, indirect, and indirect from sources out of their controls i.e. suppliers, associates, and necessary services. The third is usually the largest category, as it can include so much of a wider network, but is also the scope with the largest potential for positive growth by encouraging connections to make progress, and in working together in the Race to Zero. Unlike other races, this is one that everyone needs to finish, and no one can afford to lose.

Highways England has announced this week its new carbon plan that will see it rapidly cut carbon from road construction, maintenance and operations, and support the transition to zero-emission vehicles.

The Government company will take immediate and sustained action towards decarbonising England’s motorways and A-roads, so they can continue to bring significant benefits to motorists, communities and businesses in a net-zero future.  Building on its work reducing carbon since 2015, the plan sets out a comprehensive roadmap to rapidly decarbonise the strategic road network (SRN).

Highways England plans to achieve this by putting roads at the heart of Britain’s net-zero future through three key commitments; achieving net zero for its own operations by 2030, delivering net-zero road maintenance and construction by 2040; and supporting net-zero carbon travel on our roads by 2050.

This plan supports the UK Government’s Transport Decarbonisation Plan and the Paris Agreement. It also meets the challenge of international organisations based on scientific targets and supports the need to build back greener following COVID-19.

As the country moves towards all new cars and vans being zero-emission by 2030, over a billion pounds will be invested by the government to accelerate the roll-out of charging infrastructure, making charging researching electric cars as easy as filling a vehicle with petrol or diesel, and cheaper to run.

Planet Mark Partner with the Global Race to Zero Campaign

Race to Zero is the UN-backed global campaign rallying non-state actors – including companies, cities, regions, financial, educational, and healthcare institutions – to take rigorous and immediate action to halve global emissions by 2030 and deliver a healthier, fairer zero-carbon world in time. The partnership reinforces Planet Mark’s commitment to the campaign’s overarching goal of halving emissions by 2030 and achieving net-zero emissions as soon as possible.

All members of Race to Zero are committed to the same overarching goal: reducing emissions across all scopes swiftly and fairly in line with the Paris Agreement, with transparent action plans and robust near-term targets. This is guided by a set of procedural criteria known as the Four Ps: Pledge, Plan, Proceed and Publish.

Aligning with the campaign, Planet Mark’s digital and physical Zero Carbon Tour in their Carbon Battle Bus is designed to reinforce the Four Ps by highlighting how businesses can set their own credible net zero carbon targets, in line with Race to Zero’s rigorous minimum criteria and implement plans to achieve them. Planet Mark’s commitment is to support companies by enabling them to make year on year carbon reductions and support them in reaching net-zero targets through their suit of net-zero advisory services, while unlocking huge business benefits in the process, from increased efficiencies and reduced costs to attracting and retaining the best talent.

To amplify its partnership with the UN-backed Race to Zero global campaign, Planet Mark is introducing a suite of Zero Carbon Solutions, designed to demystify the area of net-zero carbon emissions and assist businesses in committing to a target and creating an action plan so they are supported at all stages of their net zero journey. Planet Mark have released a Home Working Package also during the pandemic, to help individuals consider their environmental impact at a time of reflection and evaluation.

This critical period between 2020 and 2030, the Decade of Action, requires bold and ambitious commitments to tackle the climate crisis, which means shifting to net-zero carbon. Net-zero measures Scope 1, 2 and 3 emissions, reducing Scope 1 and 2 emissions by at least 50% but ideally to zero, and Scope 3 by at least 50 per cent, and balancing any residual Scope 3 emissions using carbon removal schemes only.

This free three-hour workshop is designed to help businesses feel confident in their first steps towards a net-zero commitment. As well as introducing the concept of net-zero, the workshop showcases why it is an urgent business priority.

Available to Planet Mark members, this programme offers business leaders the tools and knowledge to create a credible and robust net-zero carbon action plan that is reviewed by its certification team. This is followed up with annual workshops to discuss progress against the action plan encouraging continuous improvements.

The ZeroBy30 programme goes beyond Planet Mark certification targets. It sets a pathway to absolute carbon reduction goals to reach net-zero carbon by 2030 through a transformational action plan. Businesses will be supported by a multi-skilled team, who will develop the full solutions suite and roadmap needed to reduce their Scope 1 and 2 direct emissions to zero carbon, Scope 3 indirect emissions by at least 50 per cent, and corresponding impacts on annual cashflow and carbon.

Amelie Trolle, head of engagement at Planet Mark, says, “No matter what stage a business is at on its net-zero journey, from setting a baseline to a target to creating the action plan needed to get there, Planet Mark is here to support the company all the way. We hope that by demystifying net-zero and demonstrating how companies can take tangible actions and embark on their own zero-carbon journeys, more businesses will join us to create a brighter future for all.”

The first new UK coal mine project in 30 years has been approved this week by Michael Gove, causing controversy at a time of energy focus. The planning for this...