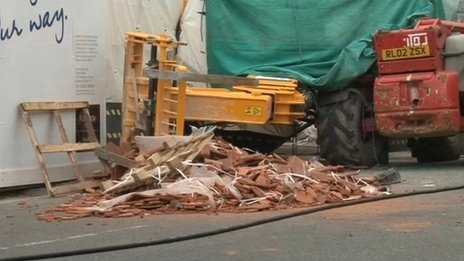 Costain has been ordered to pay more than £615,000 in fines and costs after a worker was killed when a telehandler overturned during the construction of the Parkway development in Newbury.

Mark Williams, 41, from Nuneham Courtenay, was using the vehicle to lift a pallet of tiles to a fourth story roof when the incident happened on 20 July 2011. He tried to flee the telehandler as it began to topple, but he was unable to move away in time and it landed on top of him, causing fatal crush injuries.

His death was investigated by the Health and Safety Executive (HSE), which found the safety of the vehicle was compromised by limited space and other obstructions in the area where he was required to work. Costain, the principal contractor for the Parkway development, was prosecuted for failing to provide a safer system of work.

Reading Court heard during a five week trial earlier this year (from 3 March 2014) that Mr Williams, a married father-of-two, was part of a team responsible for tiling a number of roofs. He was operating the telehandler with the boom fully raised but not extended. Raising the boom reduced the overall length of the vehicle, however it ultimately caused it to overbalance as it was being turned and manoeuvred.

HSE inspectors established that Mr Williams had no option but to operate the vehicle in this way. The space between the buildings where he worked was almost the same length of the telehandler with the boom lowered, and meant he would have had no turning circle. The court was told the vehicle was not suited for use in this area, and that had the space constraints been properly assessed and a better system of work put in place then Mr Williams death could have been avoided.

After sentencing HSE Principal Inspector, Steve Hull, commented: “This was a tragic and entirely preventable death. Mark Williams was required to use a telehandler that was wholly unsuited to the confined area he worked in. He had no option but to raise the boom so he could turn the vehicle, and in doing so he critically undermined the stability, resulting in the inevitable overturn.

Mr Hull went on to state that the victim  should have been provided with alternative, more appropriate equipment and a better system of work. Costain had “clear responsibilities to ensure that happened, but they failed to properly assess the risks and ultimately failed Mr Williams”.

Mr Williams’ employer, Attley’s Roofing, was earlier cleared of identical health and safety breaches at the end of the initial trial on 3 April. The company, of Spital Farm, Thorpe Mead, Banbury, was acquitted after being jointly prosecuted by HSE alongside Costain.