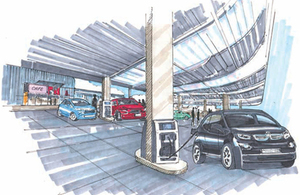 The announcement came a year after the Government launched their Road to Zero strategy - which they were claiming has driven a 60% increase in battery electric vehicle registrations this year compared to the same period in 2018 - despite a dramatic drop in sales in June as subsidies as high as £2,500 were removed.

Future of Mobility Minister, Michael Ellis, said: "We’re charging up the transport revolution and investing in technologies to transform the experience for electric vehicle drivers.

"The Road to Zero strategy sets out new measures to clean up road transport and lead the world in developing, manufacturing and using zero emission road vehicles. Through funding these projects, the Government is incentivising drivers to move towards buying electric vehicles, supporting the key aims of the strategy."

Where will the money go

Urban Foresight, a smart city consultancy, has been awarded over £3 million with The Urban Electric Company to demonstrate Urban Electric’s ‘pop-up’ changing hubs, which are built into the pavement and provide a discreet, safe and low-cost charging solution for electric vehicle drivers who don't have access to off-street parking.

Further projects to receive funding include:

An Initial 3-month feasibility study has been completed for each project which are now scheduled to move on to the next stage of development.

Richard Stobart, CEO of Char.gy, said: "Our consortium is delighted to be funded by Innovate UK to demonstrate induction charging on residential streets in Milton Keynes, the London Borough of Redbridge and Buckinghamshire County. Working in collaboration with the Open University and The University of Warwick’s WMG we are going to retrofit to existing electric vehicles and enable several parking bays per lamp column without the need for cables.

Keith Johnston, co-founder of Urban Electric, said: "On behalf of the ‘Clean Streets’ consortium we are delighted to be a winner in the Innovate UK Electric Vehicle Charging For Public Spaces competition. Together with our partners Urban Foresight, Co-wheels, Duku and AppyParking we look forward to demonstrating Urban Electric’s pop-up charging hubs in Dundee and Plymouth and to bringing residential on-street charging for the 50% of people that park on-street at night in cities one step closer to reality.

Picture: An artist's impression of an electric charge point forecourt.