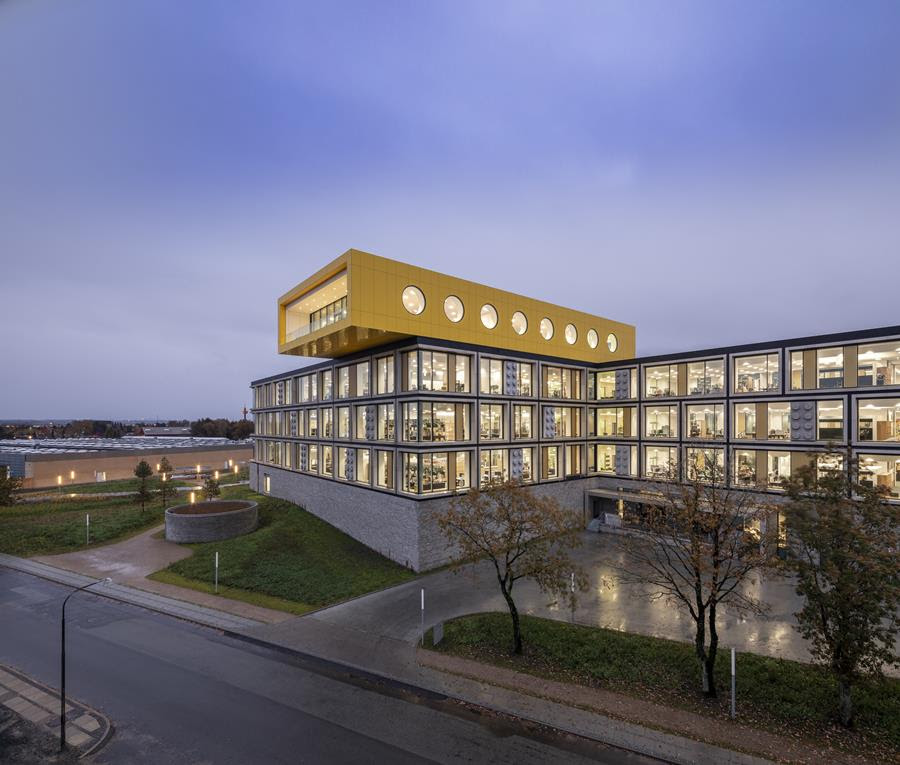 The first two buildings have been set in place, as after four years of planning and construction, the LEGO Group opened the first phase of its new, state-of-the-art campus in Billund, Denmark at the end of October.

Brick by brick, the building is designed to inspire innovation and creativity whilst expressing imagination, creativity, fun, learning and caring.

The new buildings came from a painting in the LEGO Group owner Kjeld Kirk Kristiansen’s office. In it, a boy holds up his creation of a building made with LEGO bricks. This gave the architects licence to adopt a more playful approach to their design, something that is apparent in the details of the structure. These include the use of LEGO bricks in the exterior walls, the placement of two, gigantic yellow bricks on the roof and an entryway made of bricks.

Niels B. Christiansen, CEO of the LEGO Group said:  “It’s wonderful to see these first two buildings open. The team has worked hard to create a workspace that reflects our values and instils a sense of fun. Our mission is to inspire children so it’s important we provide our talented colleagues with an environment that is playful and inspires creativity and innovative thinking.”

For the past two years, Anneke Beerkens, Senior Workplace Anthropologist at the LEGO Group, has worked with hundreds of employees from around the world to design the ultimate LEGO workplace.

Beerkens said: “In the same way you build with LEGO bricks, we took elements our people love and brought them all together to create something unique. For example, employees told us that they wanted the freedom to choose an environment that suited them best for whatever they were working on but also liked to stay close to teammates.  So we built team ‘neighbourhoods’ which are a mix of individual and collaborative workspaces designed to create a caring environment where people can do great quality work.”

Five hundred employees have already moved into two of the eight new buildings, which also include play areas, lounges and outdoor parks open to the public.

The LEGO Group has made a 'Planet Promise'. To meet this promise, builders covered the roof of the nearby parking garage with 4,150 solar panels to produce more than 1 million kWh which will supply half of the energy of the campus. The exterior of the garage is decorated with a design inspired by LEGO road playmats in a nod to the company’s iconic products.

The rooftops of the new buildings are covered with Sedum plants which absorb water and CO2. Rainwater will be used to irrigate the green parks in the campus area.

Inside, the consultants chose a special gypsum fibre board material over standard materials because this stronger material requires less steel framing, saving 22 tons of steel and 650 tons CO2 emissions.

Net Zero by 2050 means businesses will have to change the way they operate - choosing to work with green-minded suppliers and cutting energy use are prime examples....