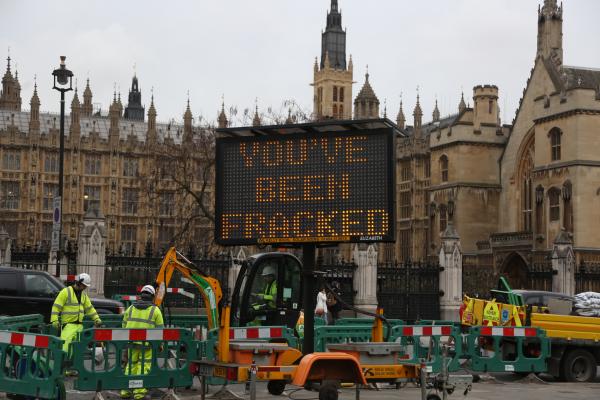 The environmental group Greenpeace has installed what it terms a ‘life-like’ 10-metre fracking rig and drill at Parliament Square this week to ‘bring the local impacts of fracking to the heart of democracy’.

The Greenpeace rig emits a ‘realistic’ flame which is firing up every hour using bio ethanol, while flood lighting and the sound effects of drilling and lorries are said to be reverberating around the Palace of Westminster.

The protest follows on from the publication of a new Populus poll commissioned by Greenpeace that it believes shows that nearly 62% of people in the UK think their local council, not central government departments, should decide whether to accept or reject fracking applications in their local area. The polling results coincided with the first day of the independent Planning Inspectorate inquiry into whether fracking will go ahead in Lancashire.

Energy company Cuadrilla which is owned by companies based in Australia and the Cayman Islands, is appealing against Lancashire County Council’s decision to reject its fracking application.

The Cameron government has already expressed its support in principle to fracking for shale gas and Greg Clark, the Communities Minister, has announced he will have the final say on whether Cuadrilla will be allowed to frack in Lancashire. In a letter sent to Lancashire County Council in November last year, he stated: ‘The reason for this direction is because the drilling appeals involve proposals for exploring and developing shale gas which amount to proposals for development of major importance having more than local significance and proposals which raise important or novel issues of development control, and/or legal difficulties.’

Picture: Direct against fracking was the point of Tuesday’s action by Greenpeace in Parliament Square

Greenpeace activists have scaled the British Museum in protest at oil giant BP’s sponsorship of a new blockbuster exhibition - ‘Sunken...

With the news this week that the Government has declared that only one county in England in Wales is not being considered for fracking (presumably the county they live...