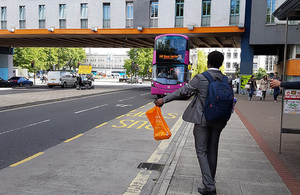 Passengers in England will soon be able to plan their journeys down to the minute as big data is set to revitalises the nation's bus use.

Ministers are claiming the launch of Bus Open Data Service in early 2020 could be the start of a golden age for buses.

Information on fares, routes, timetables and more importantly, where the hell the bus you are waiting for currently is (and how long it will take to get to you, will be easier to access to make bus travel more convenient.

Buses Minister, Baroness Vere, has announced a ground-breaking project to standardise and publish information from operators, which will enable bus users to plan routes, estimate journey times and understand costs in advance. It will also provide real-time bus location data so that passengers can travel with confidence. Information on routes and timetables will be available from early 2020, followed by location and fares data by 2021, encouraging more people to choose buses by making them easier to use than ever.

Developers will be able to add the information into existing Apps or develop new products to improve connectivity for communities and encourage more to people turn to public transport.

Baroness Vere, said: "Buses are the most frequently used form of public transport – to get to work, to the library, to the doctors or to see family and friends. "By harnessing the transforming power of data and technology we could be on the threshold of a golden age for buses. Sharing data on routes, bus locations and fares will give passengers the confidence to ride."

Only half of bus users think that it is easy to stay up to date with timetables and fares, impacting the number of journeys taken and the user experience, according to Transport Focus.

The Bus Open Data Service will be underpinned by new regulations which will mean bus operators are legally required to provide route and timetable data by the end of 2020 and fare, ticket and location data by 2021.

David Sidebottom, director, Transport Focus, said: "Making it easier for passengers to find bus times and fares is good news. Ensuring that information is accurate and timely will be crucial to the success of the open data service.

"The government will work with technology companies, App developers and information providers to ensure a range of products are designed to make the most of the data and help all bus users make informed choices."

Full data on fares and locations will be available from January 2021, by which point it is expected that a range of apps will be on the market, allowing passengers to manage their journeys from start to finish from their smartphones.

Picture: Bus journeys to work are set to become more reliable and predictable.

60 firefighters tackled a fire at a bus depot on Farnborough Hill in Orpington in the early hours of November 22 morning. At the height of the blaze, eleven buses were...