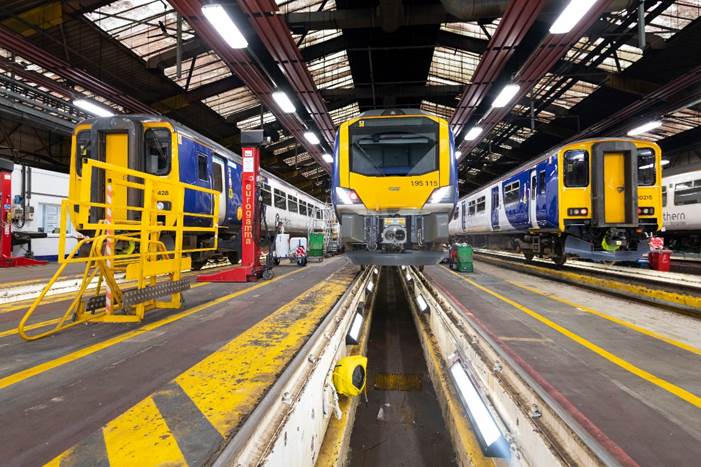 Northern’s largest rail depot, at Newton Heath, has recently undergone a complete renovation to increase the maintenance capacity for the region. The building has been designed to facilitate the efficient maintenance of the fleet of brand-new trains, to improve reliability and ensure punctuality as demand on the rail network increases.

Four 130-metre-long inspection pits, which required power and lighting, were crucial for the work on the underside of the trains. As part of the £20m revamp, M&E contractors, JPR Group, were tasked with selecting and installing a cable management solution capable of withstanding the harsh working environment in these pits.

"Legrand’s IP55 trunking was a fitting choice for this kind of installation given its ability to reduce corrosion and ingress risk in the rail environment.”

Trunking was set to be installed into the four pits to deliver cabling for power and lighting. The risk of corrosion and potential damage from water, in addition to debris ingress into the cable runs, is increased in this working environment. Therefore, an IP4X standard pre-galvanised trunking system was deemed not robust enough to cope with the challenging environment. The chosen solution would need to withstand wear and tear associated with being near the train maintenance works, ensuring safety is upheld and operations run smoothly.

IP (Ingress Protection) ratings are defined by two numbers, the first details the level of safeguarding against solids such as debris and dust, and the second details the level of safeguarding against liquids such as flooding. Therefore, IP55 is a significant improvement over the aforementioned IPX4 rating, as the latter doesn’t resist solid penetration and has lower resistance against liquids.

With tight time schedules and these exacting ingress and corrosion requirements, JPR Group selected Legrand’s quick to install and regulation-compliant Salamandre IP55 Trunking. With IP55 ingress protection, the solution is designed to be faster to install and meets the requirement for a robust system capable of withstanding the challenging heavy industrial environment.

Given the critical nature of a rail depot in keeping trains in the region on the railways' schedule, the cable management installation needed to be completed as quickly as possible. However, JPR Group faced an unexpected challenge. The routes for the inspection pits had changed slightly from the initial specification, and so the trunking runs had to adapt to fit the new routes.

This meant more bespoke bends had to be made by Legrand to fit the new contours of the pits and be delivered to the site. Because of this delay, there was potential for wider disruptions to work schedules for the entire renovation.

Though this held up proceedings, Legrand was able to supply the bespoke elements as planned. Thanks to the speed afforded by the system, JPR could complete the installation in a timely manner and complete the install by December 2020, ahead of the opening in April 2021.

“Because of the ease and speed of installing the IP55 trunking, we were able to overcome this routing challenge relatively quickly,” said Tony O’Toole, Head of Major Projects at JPR group. “Thanks to the quick delivery of the bespoke sections, we were only delayed by two weeks on this installation, still finishing well ahead of the depot’s opening. We would certainly recommend this system for this type of application, not only for the IP rating but also because it helps to mitigate delays in the construction process.”

With rail industry applications like this, there is an elevated risk of corrosion and ingress of substances into cable management systems. Debris and water from the external forces, as well as corrosive oils and compounds from the trains themselves all contribute to potential damage to the cable management runs. Any damage to the trunking could result in potentially dangerous exposed cabling.

After a discussion at the site with Islam Mohammed, Area Sales Manager at Legrand UK’s Cable Management business unit, JPR group decided that Legrand’s latest range of Salamandre IP55 trunking would be the best solution to withstand the working environment.

“All the trains for this region would be coming into this depot, often dripping water and spreading debris brought into the building from the outside,” said Tony. “One of the only solutions of its kind on the market, Legrand’s IP55 trunking was a fitting choice for this kind of installation given its ability to reduce corrosion and ingress risk in the rail environment.”

Islam Mohammed also commented on the suitability of the choice. “Given our focus on new product development that answers market needs, we were very pleased to be able to supply our solution for this project to ensure it was compliant with regulations. It is very important that rail industry installations can withstand the tough conditions of moisture, debris and heavy machinery to keep workers safe and ensure power is delivered to the site effectively. We were happy to be able to work with JPR Group throughout the duration of the project to ensure the challenges that arose were quickly mitigated.”

Faced with difficult installation requirements, JPR Group were able to comply with regulations in the rail environment with Legrand’s quick to install solution. Despite changes after work had begun in the specification of the inspection pit areas, the faster by design system could still be delivered without holding up the rest of the work on site.

At the forefront of the future for the UK's rail infrastructure developments, changes are still being made in the planning of the HS2 project – the Eastern leg has been scrapped as part of cost-cutting measures in the government’s Integrated Rail Plan.