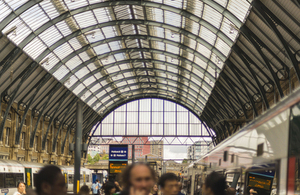 Transport for London fares will be frozen for a third year in a row and a weekly Oyster maximum will be launched - but rail fares for getting around the country and in to the capital are all set to rise.

December 10 saw the introduction of a ‘Monday to Sunday’ (weekly) capping system on Oyster on buses and trams confirmed with TfL and train operating companies now working to bring the same system in across the Tube and rail network by Spring 2019.

And Mayor of London, Sadiq Khan who oversees TfL has fares across the London network will not rise at all in 2019 as part of a four-year fare freeze.

Londoners and visitors will be able to use pay as you on the Tube, DLR, Emirates Air Line and rail services where TfL fares apply and on buses and trams and even Santander Cycles by for the same price as 2016.

Technical testing and approvals for introducing weekly capping on Oyster are now being completed. Once introduced, the cap, which is already available for contactless users, will ensure that customers are never charged more than the cost of an equivalent 7 Day Travelcard.

Commuters outside of the capital, that have endured a torrid 2018 with timetable alterations causing havoc and delays will still get kicked in the ticket. Just like every year,  Travelcards and associated caps, which are set in agreement with the train operating companies under fares regulations set by the government, will increase, by 3.1 per cent.

Mayor Khan said: “Our TfL fares freeze is in contrast to the failing private rail companies, who are once again hitting London’s suburban rail passengers with an unjustified fares hike. Given the daily experience of cancellations and overcrowding, the hike in rail fares is another kick in the teeth for fed-up rail passengers.”

Network Rail confirmed the country-wide rail increase but defended them by saying there were unprecedented improvements now and in the pipeline that the increased prices are there to pay for.

Around 45% of rail fares are 'regulated' with increases directly influenced by government policy. This includes season tickets on most commuter journeys, some Off-Peak return tickets on long distance journeys and Anytime tickets around major cities.

Successive governments have used July's Retail Prices Index (RPI) measure of inflation to determine the increase in the price of these fares. This year’s RPI figure was 3.2% meaning that for the fourth time in the past six years, fares have been held below the rate of inflation.

On 2 January 2019 rail fares will rise on average by 3.1%.  Not all fares increase - some fares may go up, many will stay the same and some will reduce in price.

Research published by the independent watchdog Transport Focus shows that while Britain has relatively high fares for some types of journeys compared to other countries in Europe, it also found that we have some of the lowest ticket prices for long distance journeys with operators now selling more and more 'discounted' tickets.

A chance to moan

The government, under the independent chair, Keith Williams, is inviting evidence from a wide range of stakeholders, on the state of the railways.

Keith Williams is the former British Airways chief executive. He wants to hear from stakeholders in all parts of the country, including passenger representatives, businesses, leading thinkers and investors and local and devolved bodies and governments.

He will be travelling across the country (presumably by rail and thus late for every appointment) visiting cities, towns and regions that depend on rail connections, listening and gathering information that will help inform a transformation of the rail industry to benefit passengers and support a stronger, fairer economy.

Williams said: "Creating a railway for the 21st Century passenger is at the core of this review. We’re launching a call for evidence and want to hear from passengers, the industry, leading thinkers and investors - and also the cities, towns and regions who depend on their rail connections.

"Next year, after forensic investigations and conversations with people across the country, we will deliver a white paper with ambitious proposals for change."

The review will consider recommendations for rail reform, building on the government’s franchising strategy and bringing track and train closer together to reduce disruption and improve accountability. It will also consider regional partnerships and how innovation can be introduced to improve services and value for money for passengers.

Add to the consultation

Picture: Station to station - TfL has frozen rail, bus and tram fares. Network Rail is putting its fares up by 3.1 per cent come Jan 2.