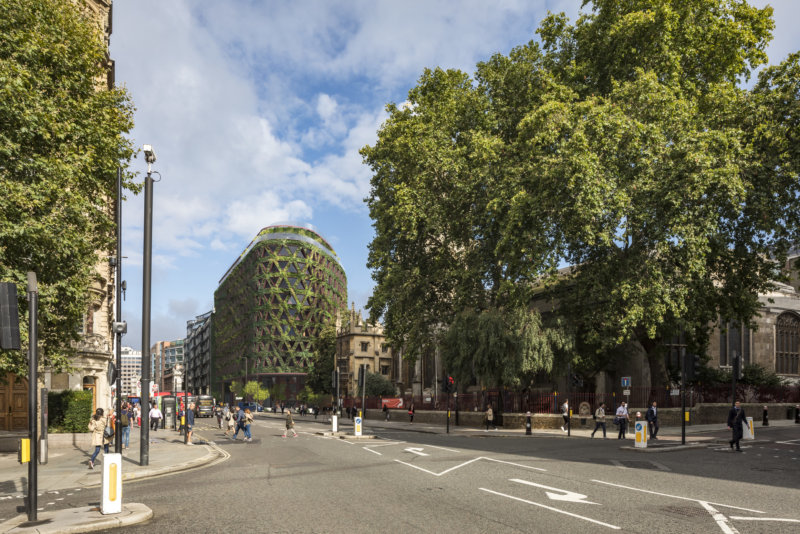 Citicape House, featuring Europe's largest living wall has been approved by the City of London.

Under the plans, the project will be developed into a new 11-storey gateway building to the newly-established Culture Mile.

The scheme, with its eye-catching sustainable façade on the corner of Snow Hill in Holborn, was unanimously approved by the City's of London’s planning committee on January 28. The committee agreed that Citicape will be the greenest building not only in the City but in the whole of the capital.

The 0.2ha site will be developed to provide 3,741sq.m of office space, a 382-bed hotel with restaurant and bar and a publicly accessible rooftop terrace.

A 3,700sq.m living wall will be made up of approximately 400,000 plants, which will cover the entire façade of the building and a public viewing gallery.

"[The City] welcomes radical and pioneering ideas as we look to create cleaner and greener spaces for residents, workers and visitors."

Preet Ahluwalia, Director at the Dominvs Group, which brought forward proposals to deliver the transformation of Citicape House, said: “Our application will see the regeneration of a site which has stood vacant for a decade.

“The green wall, which has been produced by Sheppard Robson architects and Phil Allen Design. It will play a significant role in absorbing carbon dioxide. Dominvs is playing our part in improving air quality and sustainability in London.”

A breath of fresh air

It is estimated that the living wall cladding system will provide seven tonnes of fresh air and extract nine tonnes of CO2 each year.

View from the terrace

The corner of building at 61-65 Holborn Viaduct on Snow Hill will become a landmark building. The public roof terrace will have stunning views of some of London’s most iconic landmarks including St. Paul’s Cathedral.

The building will be located at an entrance to the Culture Mile which stretches from Farringdon to Moorgate. Culture Mile is led by the City of London Corporation, and together with the Barbican, Guildhall School of Music & Drama, London Symphony Orchestra, Museum of London and a growing network of stakeholders from across the commercial, cultural and civic sectors, the area is being transformed.

“The Corporation has a real interest in urban greening, and we hope this building will prove to be a fantastic example of what is possible for future developments.”

The City of London Corporation has a commitment to world-class sustainable development and has included the key aims of greening of the City and more open spaces in the draft City Plan 2036.

As part of this, all new developments and refurbishments will be required to include a greening element to the building or public realm to contribute to improving biodiversity, rainwater run-off, air and noise pollution, temperature regulation, and making the City a more visually desirable business location.