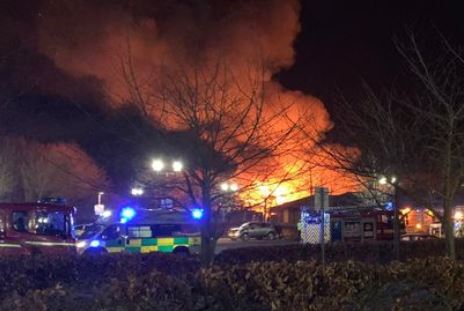 University Hospitals of Derby and Burton NHS FT has confirmed the Sir Robert Peel Community Hospital was not forced to close as a result of a major suspected arson blaze at the adjacent George Bryan Medical Centre.

A 43-year-old man, from Tamworth, has been detained on suspicion of arson in connection with the fire which broke out on the evening of Monday February 11 just before 9:00pm.

Staffordshire Fire & Rescue (SFR) Tweeted on the morning of Feb 11 that its firefighters remained the scene, with  relief crews from Rugeley and Uttoxeter continuing to use a main jet. "A fire investigation will begin once the fire has been extinguished and it is safe to do so," said an SFR officer. "Thankfully there are no reported injuries."

The George Bryan Medical Centre (a mental health facility) is operated by the Midlands Partnership NHS Foundation Trust. A spokesperson for the organisation told ThisWeekinFM: "We can confirm a significant fire has affected The George Bryan Centre. Our prime concern remains the care and safety of our patients who have been moved safely to alternative accommodation.

"Thanks to the quick actions of our staff and the rapid response from the fire service there were no injuries sustained."

When pushed to answer if the man detained by the police was also a patient at the centre, the spokesperson replied: ""A full investigation will be carried out in due course but for now we are just concentrating on making sure all involved are looked after."

Local MP, Christopher Pincher, Tweeted from Westminster (where he is preparing for another Brexit debate): 'Very concerned to hear about this news. I very much hope that there are no injuries at this facility I know well and wish all the best to our local fire crews, Police and emergency services'.

Picture: Staffordshire Fire & Rescue were forced to let part of the George Bryan Medical Centre burn in order to prevent it from spreading to the rest of the hospital complex.