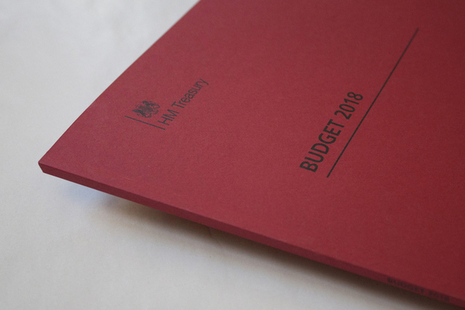 The Chancellor has presented his Budget to Parliament – here's a summary of what was announced...but we've tried to put it in order of relevance to the FM community.

The cost of a pint of beer will be 2p lower than if duty had risen by inflation.

The Royal Mint will create a new commemorative Brexit coin to mark the UK’s exit from the European Union - it will feature a map of the UK holding a gun to its own head and blowing its own brains out...or so rumour has it!

National Living Wage will increase to £8.21

Further changes to the apprenticeship levy to support employers

From April, large businesses will be able to invest up to 25% of their apprenticeship levy to support apprentices in their supply chain. Some employers will pay half of what they currently pay for apprenticeship training - from 10% to 5%. The government will pay the remaining 95%.

Fuel duty will remain frozen for a ninth year

In 2019, fuel duty will remain frozen for the ninth year in a row.

A £28.8 billion National Roads Fund, paid for by road tax, includes £25.3 billion for the Strategic Road Network (motorways, trunk and A roads). It will also help fund the new network of local roads (known as the Major Road Network) and larger local road projects.

Local authorities will receive £420 million to fix potholes on roads and renew bridges and tunnels and there will be a £150 million to improve local traffic hotspots such as roundabouts.

Short-haul rates of Air Passenger Duty will not rise

Short-haul rates of Air Passenger Duty will not rise for the eighth year in a row, keeping costs down for 80% of passengers. Long-haul rates will rise in line with inflation.

NHS funding will increase, including more spending for mental health

The government will increase the Annual Investment Allowance five-fold from £200,000 to £1 million to help businesses to invest and grow.

Also, from October 2018, businesses will be able to deduct 2% of the cost of any new non-residential structures and buildings off their profits before they pay tax.

From April 2020, large social media platforms, search engines and online marketplaces will pay a 2% tax on the revenues they earn which are linked to UK users.

Scotland, Wales and Northern Ireland will all get more money to spend in devolved areas, including education, health and housing. This Budget means:

Over £1.5 billion to support the high street

Small retail businesses will see their business rates bills cut by a third for two years from April 2019, saving them £900 million.

Local high streets will benefit from £675 million to improve transport links, re-develop empty shops as homes and offices and restore and re-use old and historic properties.

This adds to previous reductions in business rates since Budget 2016 which will save firms over £12 billion over the next five years.

Up to £8 million to help with the cost of repairs and alternations to village halls, Miners’ welfare facilities and Armed Forces organisations’ facilities.

£1 billion more for defence over the next two years

The Ministry of Defence will receive an extra £1 billion to help protect the UK against changing threats such as the rise in cyber-attacks and the resurgence of state-based threats.

This funding adds to the £800 million announced earlier this year.

The government is providing £500 million of additional funding for departments to prepare for Brexit for 2019-20. This is on top of the £1.5 billion already announced for that year.

Again Hammond claimed that the economy has grown every year since 2010, and is projected to continue growing in each year of the forecast. The unemployment rate is at its lowest for over 40 years, there are over 3.3 million more people in work since 2010 and the OBR forecasts 800,000 more jobs by 2022.

The tax-free Personal Allowance will rise to £12,500

Increases to work allowances will mean working parents and people with disabilities claiming Universal Credit will be £630 better off each year. People will also receive extra help as they move from their existing benefits to Universal Credit and there will be targeted support for people repaying debts.

A new railcard for all young people aged 26 to 30, available nationally by the end of the year

The first digital only railcard will offer up to a 1/3 off most rail travel.

£650 million for social care next year

Local authorities in England will receive a further £650 million in social care funding next year.

From 29 October 2018, the day of the Budget announcement,  in England the government is lifting the cap on the amount of money local authorities are able to borrow to build housing. Local authorities fund housing through a separate Housing Revenue Account. The Welsh Government is also taking immediate steps to lift the cap in Wales.

£400 million extra for schools this year

Picture: Big Phil Hammond made his Budget announcement in Parliament on 29 October 2018 and was not due to make another one until October 2019 - but he may have to revise this to April following Brexit.

Guidance issued by the UK Health Security Agency states that adults suffering from respiratory illnesses should wear face masks if they have to leave home. Amidst high...