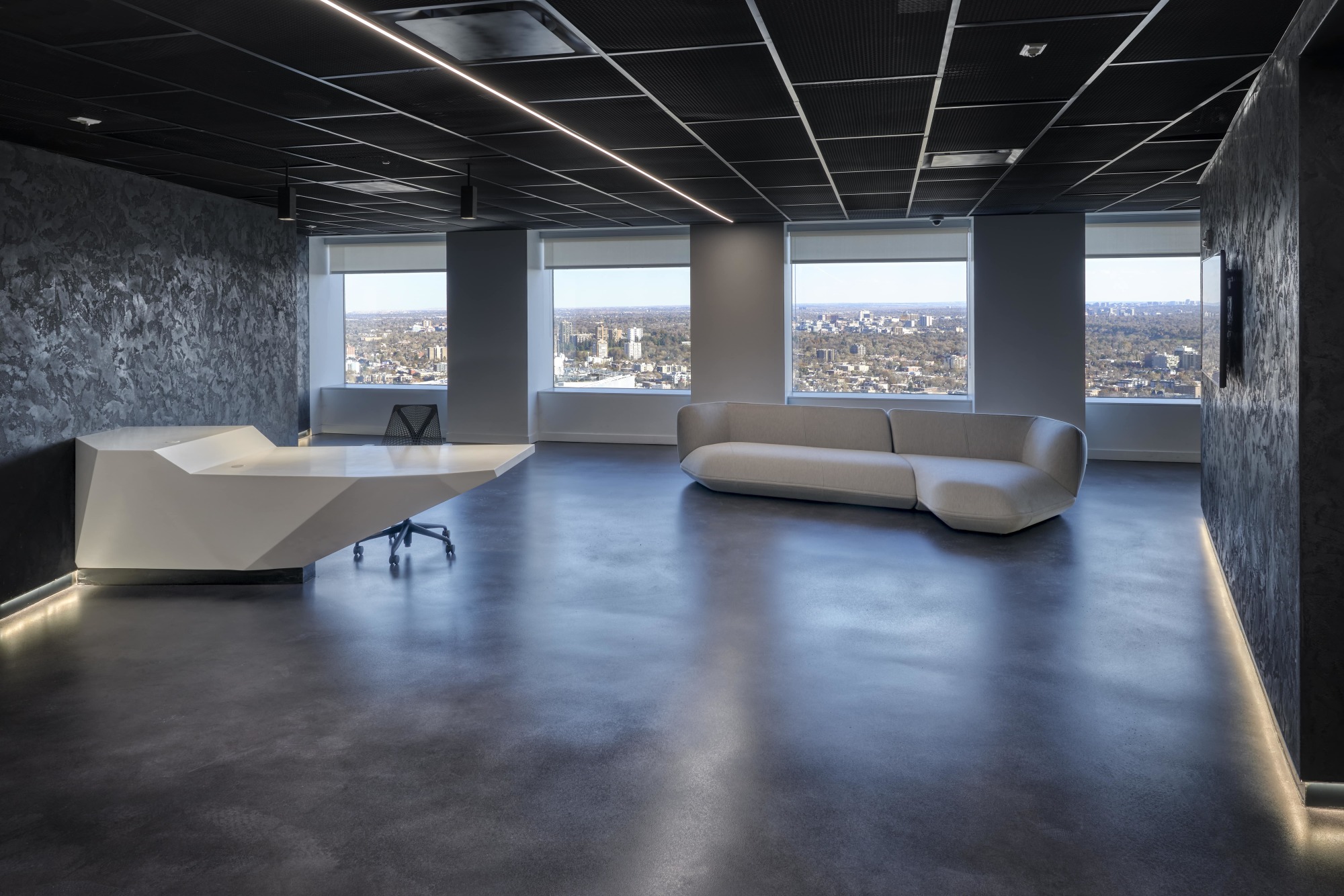 Gymshark’s Denver office, or GSDNV, has been designed by Oktra, the design and build company behind each of Gymshark’s locations in the UK and Hong Kong.

The fitness apparel and accessories brand is one of the most exciting success stories in recent history, having recently been valued as a £1 billion company, making it only the second British company to achieve unicorn status, as well as securing investment from General Atlantic.

A significant percentage of its turnover comes from the US market, prompting the company to establish a route into the US to support its American consumers. 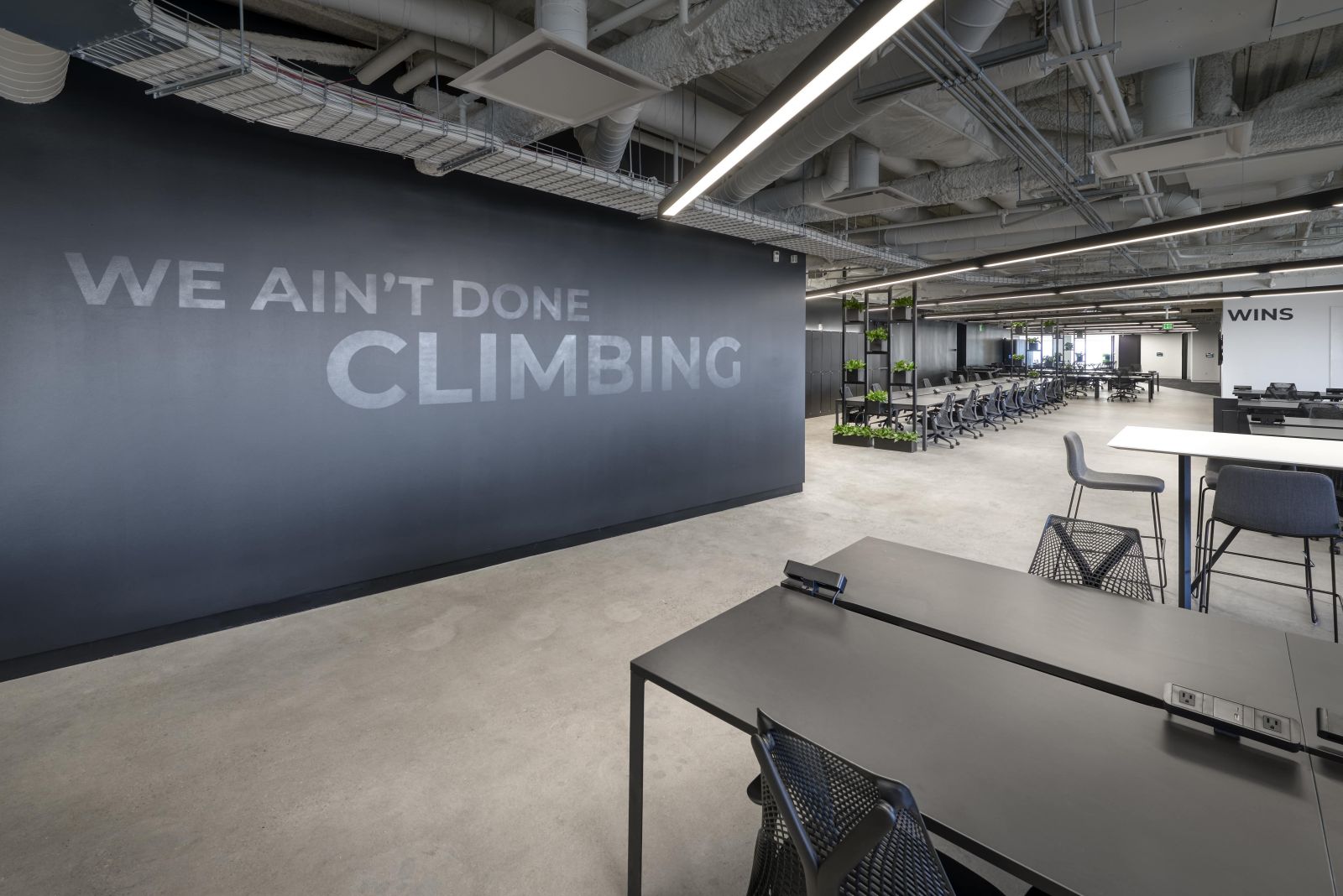 Picture: a photograph of Gymshark's offices, showing a wall that displays the wording "We ain't done climbing"

“The opening of GSDNV is the latest milestone on this incredible Gymshark journey,” says Paul Richardson, Executive Chairman of Gymshark.

“Culture and community flows through everything we do and stand for. That’s why, alongside the guys at Oktra, we’re delighted to have built a US headquarters that echoes what we stand for, but has its own identity.”

GSDNV includes a refuelling area for staff complete with local catering, meditation rooms, rehabilitation or physical training facilities, dressing rooms and a barber. The workspace also hosts a range of spaces tailored to support the way Gymshark’s teams will be working, from café-style informal meeting lounges to open agile workspace, meeting rooms and an ideation room with entirely writable walls for real-time innovation and collaboration.

Gymshark is the latest in a wave of industry leaders to relocate to Denver, Colorado, the fifth-fastest growing city in the US. Rather than moving to the city’s tech district like many others, Gymshark has taken second-generation space in the heart of downtown – a characteristically disruptive move that reflects the company’s mentality.

Centrally located, the American office will allow Gymshark’s teams to communicate across time zones, supporting customers on the West and East coasts of America while remaining in touch with UK head offices. GSDNV houses the majority of Gymshark’s US functions including creative and branding teams, athlete management, legal teams and commercial and customer services.

Denver’s renowned outdoor sporting culture will enable Gymshark staff to live and breathe what they do. The new office is located in Republic Plaza – the tallest building in Colorado, boasting panoramic views of the Mile-High City and the Rocky Mountains.

“Gymshark is a disruptive brand and we consider ourselves to be a disruptive city competing with the larger coastal markets,” says American team member and Rand Construction Project Executive Lindsay Parker.

“Gymshark’s growth and style are going to further propel the desire that people have to be in Denver.”

Featuring urban materials like sealed concrete flooring, suspended ceiling rafts and mesh, the workspace is indicative of Gymshark’s UK and Hong Kong locations: in fact, the boardroom is a direct replica of that in the UK headquarters, incorporating part of the company’s home within its newest location.

That being said, GSDNV has an identity all its own – one that is very much a fusion of the brand and the surrounding area. “It’s bold and brave as an approach,” explains lead designer Sean Espinasse.”

Users progress from a dramatically low-lit reception and meet and greet area, to increasingly brighter spaces as they move deeper into the office and simultaneously closer to the building’s perimeter, until being met with pristine white workspaces and striking views of downtown lined with the nearby mountain range. “The light in Denver is unique and it amplifies the contrast inside the space that makes it a particularly striking design,” reveals Espinasse.

One of the most impactful features of GSDNV is not a facility at all, but a lighting system. Smartengine intelligent lighting by WTech uses sensors to monitor surrounding levels of light and mimic natural daylight, keeping circadian rhythms intact even in the built environment. The same sensors pick up information on space use as well, allowing Gymshark to monitor office occupancy and efficiency while cutting energy use by 90%. Oktra first installed the lighting system in Gymshark’s UK headquarters.

“This workspace is going to fuel Gymshark’s growth by giving them a home: it’s about connecting people. It’s a space for people to congregate but it’s also a flexible environment. The dynamic nature of the design is what will enable Gymshark to grow,” says Espinasse. The new office provides Gymshark’s teams with the resources they need to further their growth in the American market, and it signals a similar period of transformative change for the surrounding area as Denver emerges as one of the world’s newest business capitals.

The Project in Photographs 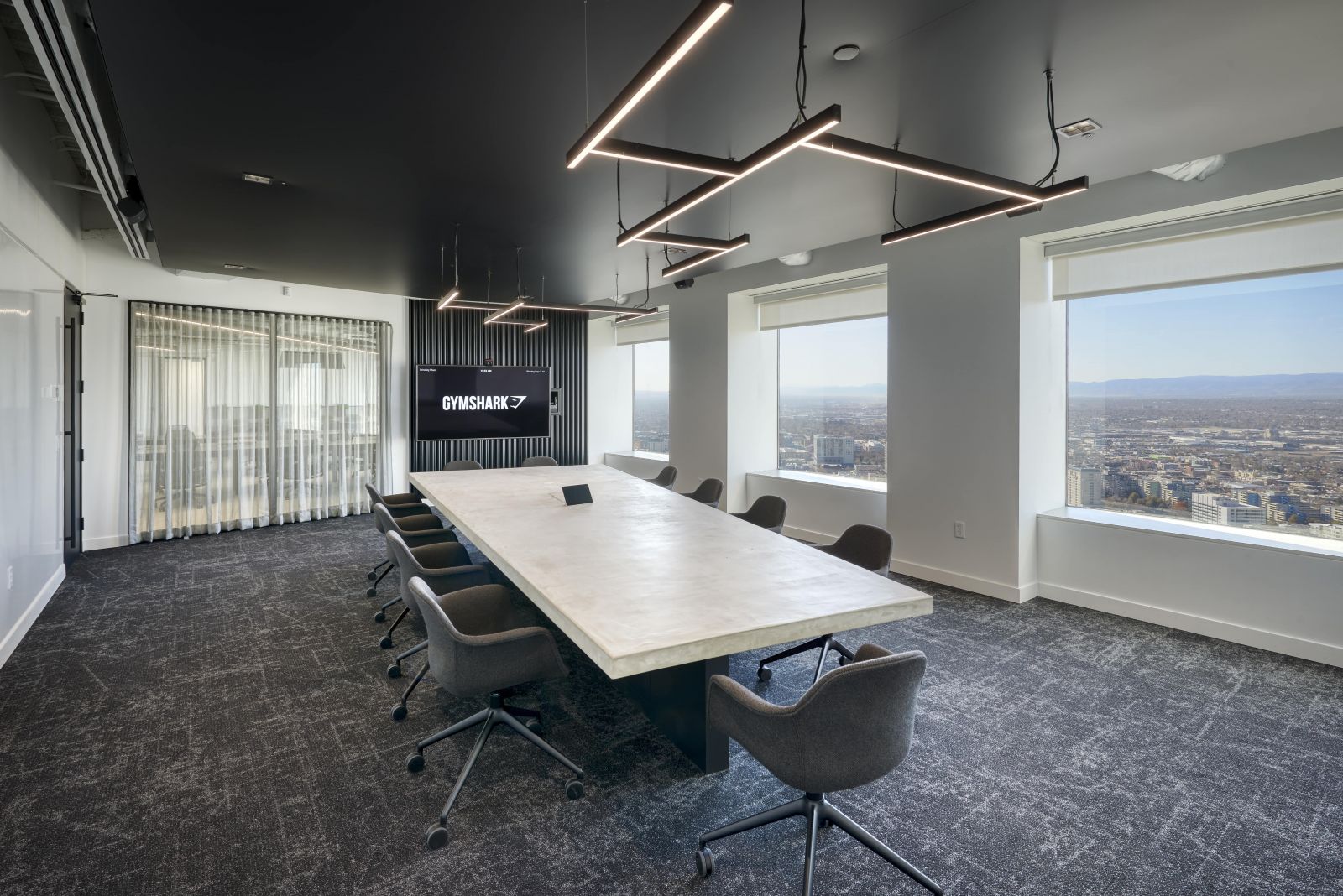 Picture: a photograph of Gymshark's board room 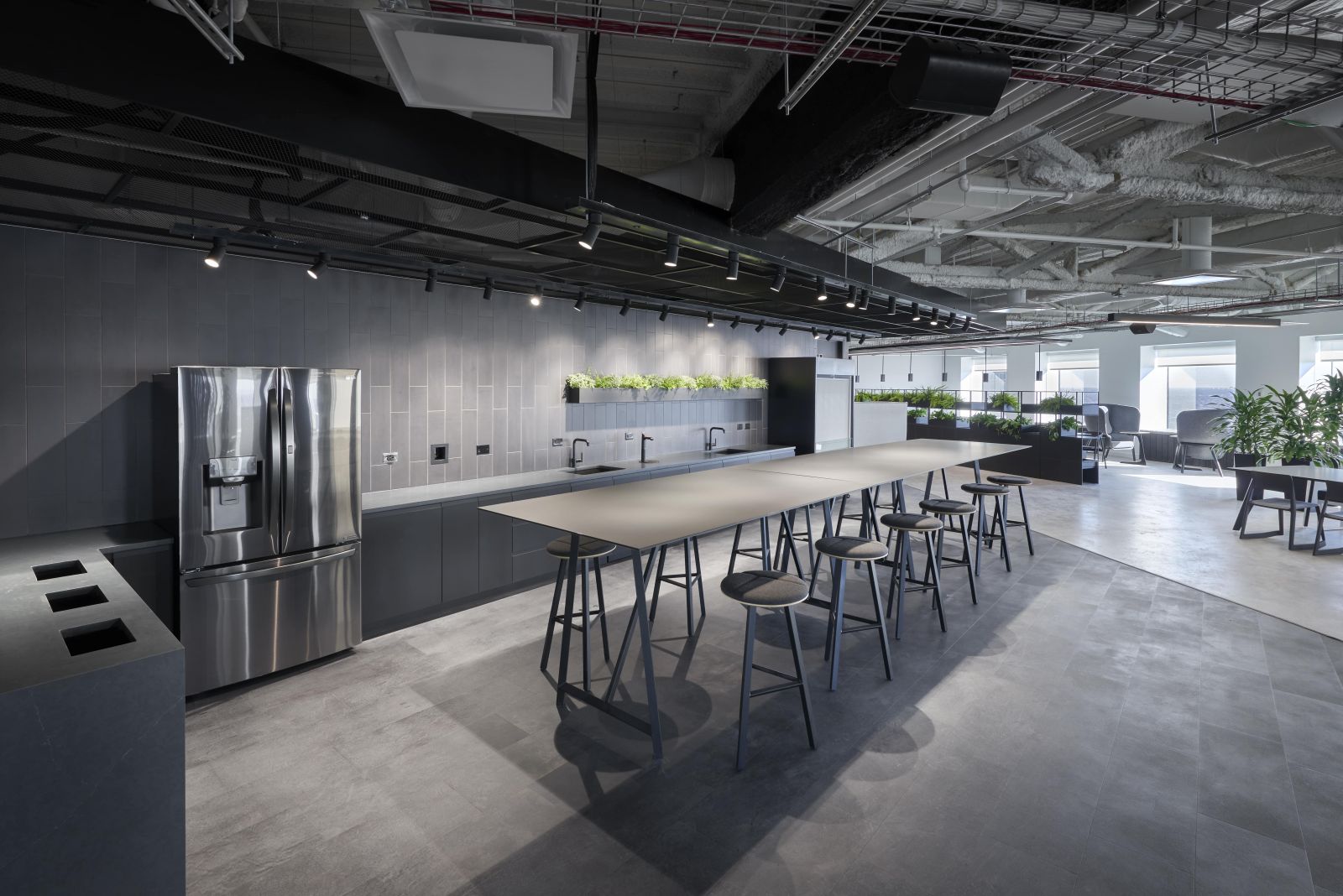 Picture: a photograph of Gymshark's kitchen in offices 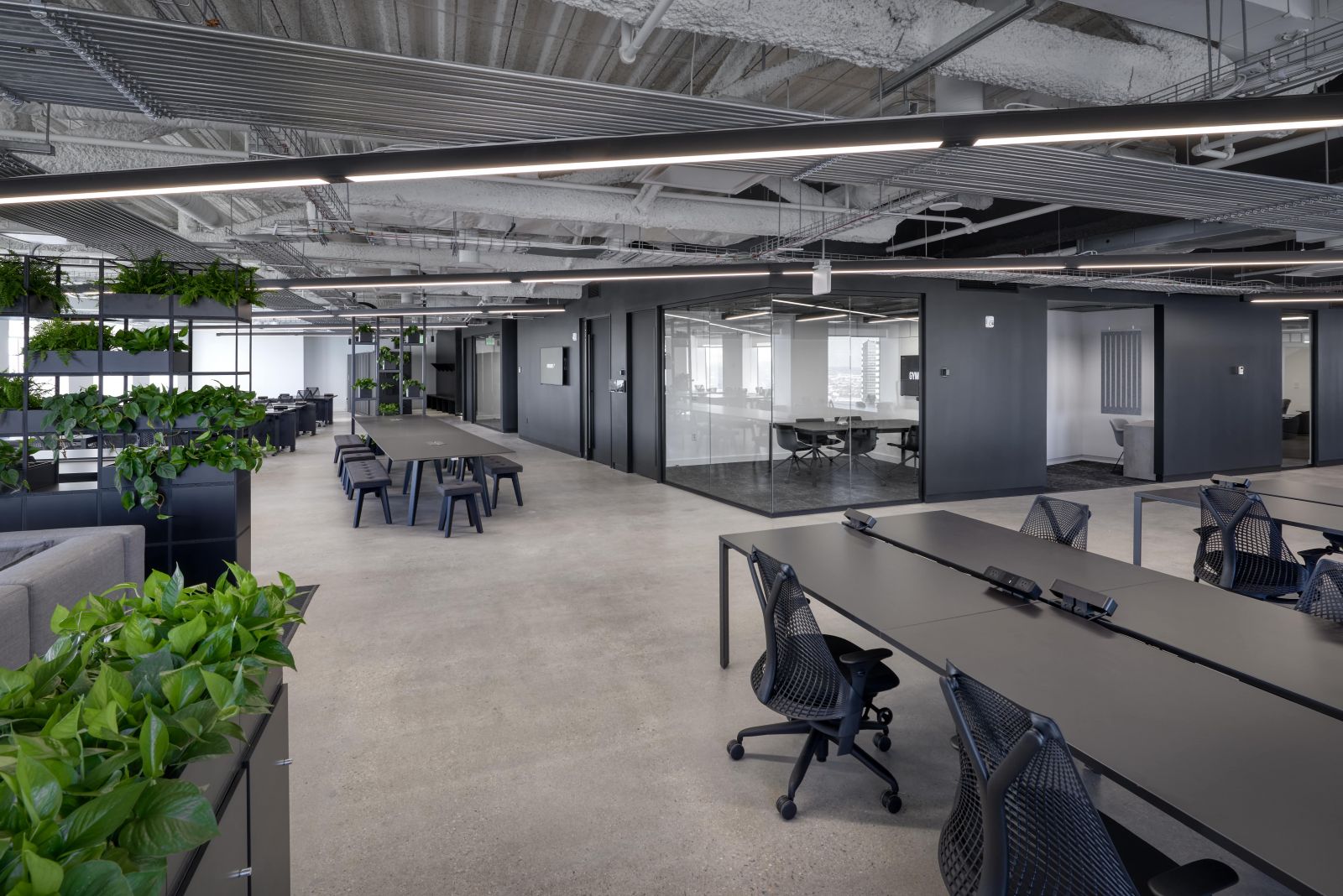 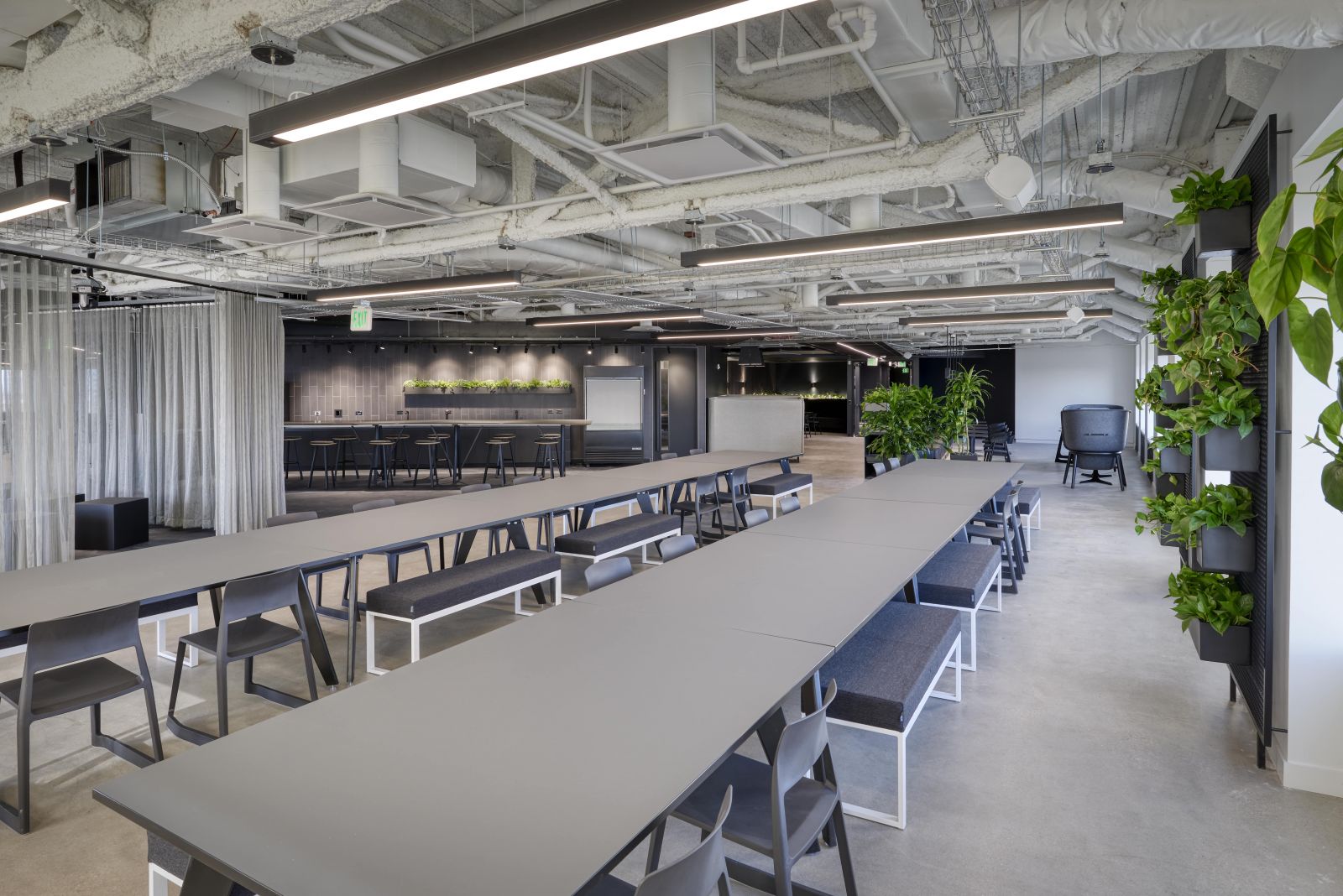 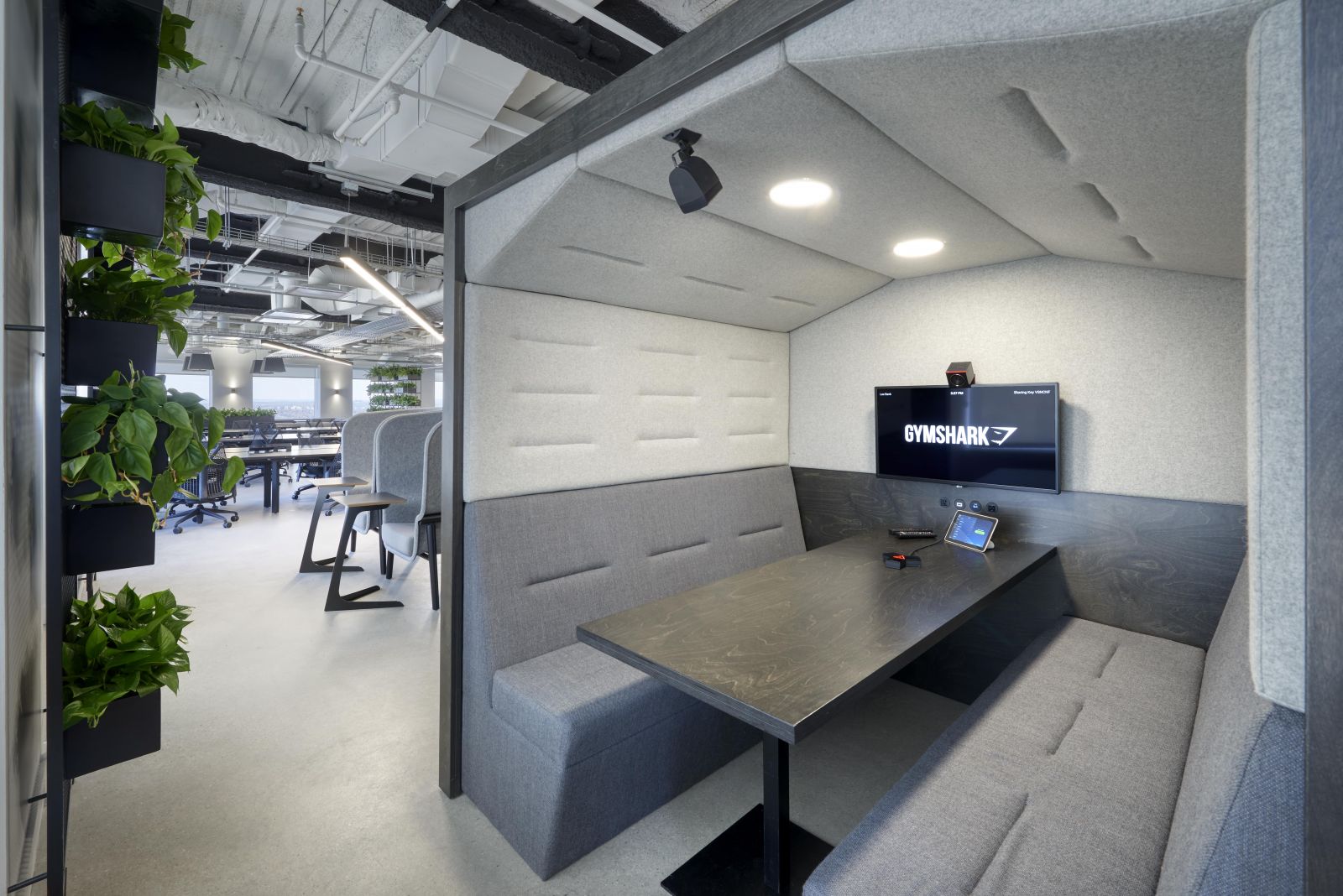 Picture: a photograph of a small meeting booth

BW: Workplace Experts has completed the fit-out of The Mills Fabrica’s London HQ for developer Endurance Land. The project was comprised of both a CAT A and CAT...

University College London researchers say that the view from your work desk can dramatically affect productivity, so where can you find the best office views in the...