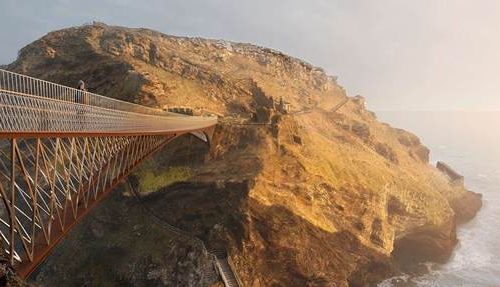 Tintagel Castle, where King Arthur and wiley wizard Merlin made their home in the days of the Knights of the Round Table, now requires lightening protection.

The castle stands on a spectacular North Cornwall headland. The current path to get too from Tintagel Village is challenging, with over 100 steps. In October 2018, Historic England (which is responsible for what is a major tourist attraction) started work on a footbridge to create an 'aerial' crossing from the mainland to the headland.

Now complete, the bridge requires the design, supply and install of earthing/lightning protection. It is a prestigious project, something that has been in the planning for several years. Historic England's contractor America UK has appointed Premier Technical Services Group (PTSG Electrical Services) - and the company is relishing the prospect of showing their capabilities on structures other than buildings.

Picture: In the depths of Cornwall but not a bridge too far for PTSG Electrical Services to show off their earthing/lightning protection skills.

Macro has been awarded a new five-year contract by Transport for London to manage the operations of the five year old Emirates Air Line - the cable car ride built in...

Willmott Dixon has invested in a permanent base in Plymouth, emphasising its support for the region. Following its completion of The Box, the restored museum and...