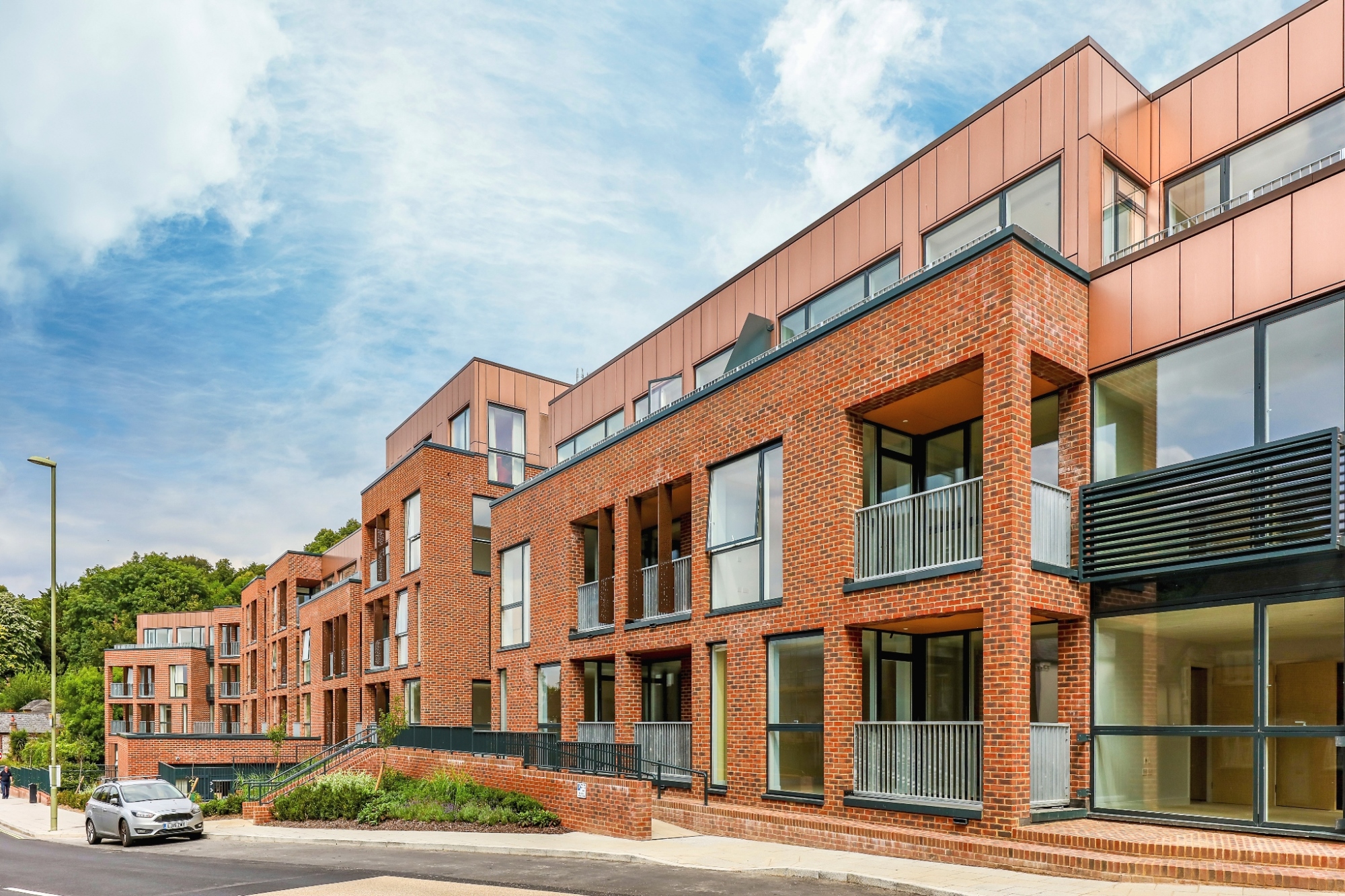 Chesil Lodge is a £16 million Extra Care facility that provides contemporary style homes for local residents of Winchester aged 55 and over. It is the latest development to feature bronze rainscreen cladding from Proteus Façades.

During the design stages, a series of workshops were held between Winchester Council and designers PDP Architecture in conjunction with local architect’s Design Engine, where it was envisaged that the building should be developed to be as sympathetic to its surroundings as possible.

The Proteus panels were specified because the material’s ochre, brown and red tones complement the brickwork colour to create an aesthetically pleasing yet unobtrusive façade.

Working alongside main contractor, Galliford Try, Proteus Facades fabricated the panels, which have a lightweight aluminium honeycomb core structurally bonded between two thin gauges of metal, with the outer veneer in this case being the specified Tecu Bronze material. This rainscreen system minimises weight loadings on the underlying structure whilst helping the panels achieve optical flatness, strength and rigidity. The cladding panels were installed by MK Facades.

When used in this way copper and copper-alloy materials such as bronze mellow over time. Weathering subtly changes a façade’s appearance as it develops a tough, maintenance-free patina - as will be the case at Chesil Lodge.

During the weathering process, the matt surface of the rainscreen cladding panels develop an oxide layer that will provide additional protection from rain, frost, wind, UV rays and other external elements. This brings with it colour variations through an entire range of warm russet tones that change depending on the level of natural light and time of year.

The overall building design is based around a clever syncopation of two and three storey blocks that feature integral balconies, which, in combination with the rainscreen cladding and glazing elements, visually interrupt the skyline, avoiding what could otherwise have been a large, monolithic structure.

This massing of the development and the façade treatment created a development that is sympathetic with its location. PDP Architecture orientated the building so that it faced on to the rear of Chesil Street, a measure to avoid imposing on existing buildings on the local area.

The factors described above resulted in the development securing the Best Inclusive Building Award at the annual Local Authority Building Control (LABC) Awards 2019. In addition, Chesil Lodge has been shortlisted for the 2019 SPACES Civic Building of the Year award.

Picture: Chesil Lodge comprises of 52 self-contained Extra Care Units supported by a number of shared facilities including a reception area, cafe/restaurant facility, a lounge and activity rooms, as well as a Day Care Unit which allows families respite from care for the morning or afternoon.

Managing mechanical failures in commercial buildings could be made easier for facilities managers by using a virtual engineer. To help FMs manage automatic...

Copper Theft in the UK on the Rise

With the value of raw materials regularly increasing, M&E specifiers and contractors are being urged to consider traditional pipework alternatives in order to reduce...

Doors at the entrances to the British Medical Association's 'heritage' building have finally been cured of the problem that they did not provide appropriate...