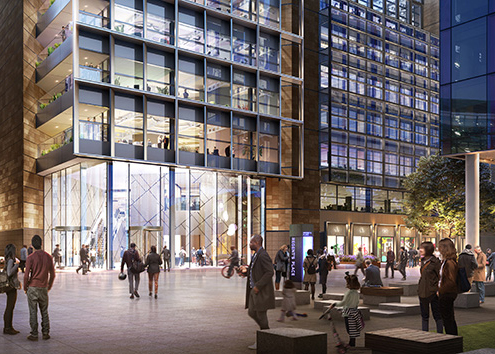 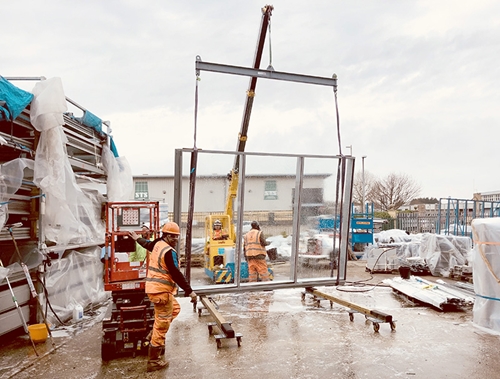 Simon Swietochowski of Arup Architecture, looks at how 1 Triton Square could be a gamechanger for building reuse – showing that refurbishments can be exciting, attractive to new customers and hugely sustainable.

1 Triton Square was designed by Arup for British Land in the 1990s. Twenty years later, they asked us to adapt the building for today’s workstyles. For others, demolishing the building and creating something new might have been the favoured option but British Land took a circular economy approach, asking, 'How much can we retain and reuse?'.

A massive amount – around 3,300sq.m of limestone, 35,000 tonnes of concrete and 1,900 tonnes of steel for a start. We kept as much of the façades and superstructure as possible, while adding three floors and doubling the net office area, all without increasing the amount of plant space.

Further savings have been achieved by positioning the corner stair cores outside the building’s thermal line, with nominal heating for frost protection, which has improved air tightness and energy efficiency. We’ve also replaced over 70% of the cement needed with blast furnace slag, which typically has 50% less carbon than standard concrete.

Altogether, 1 Triton Square will achieve a 44% carbon saving in construction and operation versus a typical new-build alternative. This exceeds the reduction curve for the UK’s current carbon target, set out in the Climate Change Act to meet our commitment to the Paris Agreement.

It shows what’s possible when a client and project team commit to new heights of environmental performance and are open to testing new ideas. This kind of collaboration and innovation will become even more important if the UK brings forward its zero-emissions target to 2030.

The regenerated building’s appeal is clear, achieving the biggest West End pre-let in over 20 years. Dentsu Aegis, who already have space in two buildings at Regent’s Place, chose 1 Triton Square for their UK headquarters.

Today, 1 Triton Square is one of the most controversially positive schemes in UK construction. I say ‘controversially’ because there’s a perception in the industry and marketplace that new buildings are worth more than reused ones and are easier to let. This misconception urgently needs to change - it flies in the face of good sense.

When you regenerate a building imaginatively and to a high standard, the quality of space is often more characterful and diverse than a new build. Reuse can also be faster, leaner and greener. Over 80% of 2050 buildings are already built, so if we’re to meet global climate goals, we need to change how we think about reuse – we must decarbonise our existing stock, which is what we’ve done at 1 Triton Square.

Like Olympic athletes seeking innovations and marginal gains to improve performance, Team Triton – comprising client British Land, an all Arup design team, contractor Lend Lease and occupier Dentsu Aegis – chipped away at every aspect to save carbon, cut waste and deliver the best working environment. We quickly reached a point where we could get from BREEAM Excellent to BREEAM Outstanding for very little extra cost; as it turns out, roughly 0.3% of capital expenditure, compared to a perceived industry norm of around 5%.

The business as usual approach for a 20-year-old glazed façade would be to scrap the old one and buy new. Instead, we worked together to pioneer a circular façade. 3,500sq.m of panels (equivalent to over a dozen tennis courts) were removed and transported to a pop-up factory less than 30 miles away. Here, each one was inspected, deep cleaned, refurbished and new gaskets fitted. They have just started to be reinstalled.

It was initially proposed to send the panels to Germany for refurbishment but as an example of our marginal gains approach, establishing a pop-up factory nearby saved 25,000 transport miles, cutting carbon and supporting UK jobs.

Team Triton also pioneered British Land’s first carbon fibre column wraps. The default strengthening solution to support the additional weight of the three new floors would usually be to add extra columns next to the existing ones. Instead, where possible we wrapped carbon fibre around the original ones. This added strength, was faster to install and at only 4mm thick, saved up to about 55% on floor area versus a twin column solution. It also minimised visual disturbance across the floor plate.

Does that make me crazy?

I am an advocate for reuse and refurbishment. Does that make me crazy? Our cities have architecture that has lasted hundreds of years. But the lifespan of many modern commercial buildings is closer to 20 years than 100. Now that’s crazy!

If we build for long life use, it would mean that we’re designing places now that our kids and grandkids might work and live in. 75 years from now, a building I design today could be on its third generation of renewal (rather than rebuild).

That’s exciting but there’s also huge trust bestowed on our generation to create places that can regenerate in a changing world. We’re entering a period of cultural shift where knocking down and starting from scratch will no longer be the default.

If we’re to combat the climate emergency, it’s essential that more clients adopt a radically different mindset like British Land. 1 Triton Square is ground-breaking because the whole team was willing to look at the world differently and collaborated to drive positive change. I’m proud to be part of this team at a pivotal time in contemporary construction.

57,000 tonnes carbon saving and growing. An environmentally responsible, socially active workplace for 4,000 healthy and happy people. 2.7 metre floor to ceiling glazing, along with shading, to fill offices with natural daylight for wellbeing. 5 panoramic terraces for events, socialising, meeting, working, exercising and relaxing. 492sq.m of green roofs, with insect hotels, beehives and bird boxes for nature in the West End. 536 cycle spaces, along with lockers and showers, encouraging active lifestyles and green travel.

Picture: 1 Triton Square and the façade being sent for refurbishment.