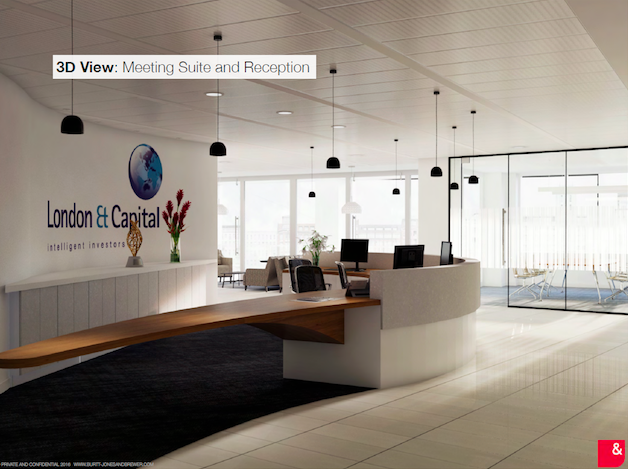 Less than 10 months after placing the contract for a relocation, design and fit-out of new swanky offices, wealth management firm, L&C have moved in.

The project was delivered on time and saw London & Capital (L&C) move to Fitzroy Place in London’s West End.

In the initial phases, the contractor, Incentive Workspace, worked closely with their design partners, Burtt-Jones Brewer, to deliver the design of the office. The emphasis was on creating a contemporary open plan working environment and flexible client meeting rooms including a dedicated area where clients could have informal conversations with their wealth advisors.

Work started on the fit out of the office in September, which included all partitioning, cabling, lighting systems, M&E and HVAC installations, carpeting, and furniture.

Incentive Tec were chosen to install the mechanical, electrical and air conditioning systems. During the fit out, the Incentive Tec air conditioning design engineers determined that there was insufficient cooling capacity available from the landlords VAV supply and that a supplementary VRV system would be the best solution for the meeting room complex.

It was further agreed that the fan coil units could be better distributed around the remainder of the mainly open plan office space. Despite this substantial variation, Incentive Workspace delivered the fit out by 22nd December 2017 which enabled employees to move in by the agreed date of January 2018.

Guy McGlashan, COO at London & Capital, said: “We were thoroughly impressed with Incentive Workspace. Their expertise and ability to react to unexpected changes on the project meant they delivered an impressive office environment on time, that suited our specific business requirements.”

Dining Out On LV

The sales team at one FM company will be dining out on the story of their latest contract win - LV=, the largest friendly society in the UK, which has chosen Incentive FM...

Bidvest Noonan has acquired the security only contracts held by Incentive Lynx Security from Incentive FM Group for an undisclosed fee. The decision by Incentive to...