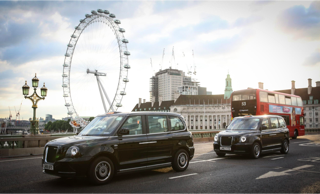 Gett, the black taxi app will offer customers the ability to exclusively order the new TX Electric taxi in London. Meanwhile Uber is to add a 15p a mile levy to fund grants to drivers to buy electric vehicles.

Gett’s customers will now have the option to take carbon neutral rides through the usual Taxi, XL and WAV options, make air quality donations through Gett Green and ride emission-free with the Gett Electric option.

The smart design of the TX Electric taxi allows up to six people to comfortably sit in the back, with the option for wheelchair accessibility also available. With a 50kW rapid charge, the battery powers up to 80 per cent in 25 minutes. Whilst being environmentally friendly, the taxis are also cost effective. LEVC says operators of the TX Electric taxi will save at least £100 in fuel cost savings.

Gett is also supporting the adoption of the TX Electric taxis from London E V Company (LEVC), the manufacturer of London’s electric black cabs, in London as well as in other UK cities such as Coventry, Edinburgh and Glasgow. Gett is encouraging their drivers to obtain the TX Electric taxis through reduced commission schemes for cab drivers using the Gett app.

Neil Parish MP, Chair, Environment, Food and Rural Affairs Select Committee said; ”The London taxi trade is modernising and the TXE cab is an important part of that journey. Its environmental credentials mean it is playing a significant role in reducing air pollution in London. It's great to see Gett supporting this new environmentally friendly step.”

Gett is also giving its London black cab customers the opportunity to ride ‘carbon positive’ by paying an optional 20p extra per ride through the Gett Green class. Here, not only will the carbon emissions from the ride be offset, but the optional donations will be made to the 12 central London schools identified in the Mayor of London’s school air quality audit programme.

Uber is introducing its Clean Air Plan to help tackle air pollution in London – aiming for every car on the app in the capital to be fully electric in 2025.

As part the plan, from early next year, a ‘clean air fee’ of 15p per mile will be included on every trip booked through the Uber app in London – every penny of which will go towards helping drivers to upgrade into an electric vehicle as well as other clean air initiatives.

Every driver using the app in London will be able to get assistance to help them move into an electric car. The amount of support drivers will receive towards the cost of an electric vehicle will be based on the number of miles they have driven on the app. For example, a driver using the app for an average of 40 hours per week could expect around £3,000 of support towards an EV in two years’ time and £4,500 in three years.

Uber expects to raise more than £200 million to support drivers transitioning and the firm anticipates the first 20,000 drivers upgrading to electric vehicles by the end of 2021.

Dara Khosrowshahi, CEO of Uber, said: “The Mayor of London has set out a vision to tackle air pollution in the capital and we’re determined to do everything we can to back it. Our £200 million Clean Air Plan is a long-term investment in the future of London aimed at going all electric in the capital in 2025. Over time, it’s our goal to help people replace their car with their phone by offering a range of mobility options – whether cars, bikes, scooters or public transport – all in the Uber app.”

Chris Large, Senior Partner at Global Action Plan, the charity behind Clean Air Day, said: “Two major barriers slowing the uptake of electric cars are still the purchase price and the substandard charging network. Uber’s efforts to overcome these barriers should be commended. The aim for London Uber journeys to use only fully electric cars by 2025 is one of the most ambitious aims of any major company in the future mobility sector.”