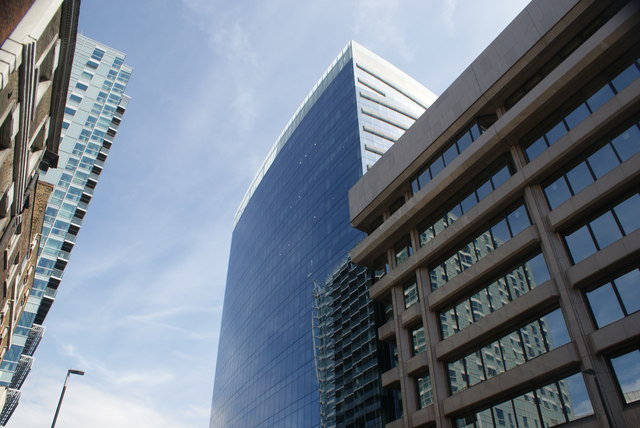 The cause of a fire at a block of flats and offices on Whitechapel High Street is being investigated.

Twenty fire engines and around 125 firefighters attended the scene at the Relay Building in Aldgate East on Monday 7 March.

Station Commander Chris Jenner, who attended the scene, said: “This was a dynamic and visible fire with our 999 Control Officers taking more than 50 calls in the early stages. A woman was trapped by the nature of the fire on the 17th floor. She was given fire survival advice by control officers until firefighters located her. Fire crews used a fire escape hood to help lead the woman to safety via the internal staircase.

“Around 70 people evacuated the building with others remaining in their unaffected flats.

“We mobilised a 64-metre turntable ladder to the scene. This is the tallest firefighting ladder in Europe and allowed us to get water onto the fire from outside the building.

“The professionalism, hard work and quick actions of control officers and firefighters limited the damage to the block and prevented serious injuries.”

The fire on #WhiteChapel High Street is now under control. A woman was trapped by the fire. 999 control officers gave her advice & firefighters rescued her by using a fire escape hood. Incredible professionalism by all avoided serious injuries https://t.co/wyMmpNeYbp pic.twitter.com/dRSiaj34Kj

What are Fire Escape Hoods?

Fire escape hoods provide members of the public with up to 15 minutes protection from four of the main fire gases (carbon monoxide, hydrogen cyanide, hydrogen chloride and acrolein) and can be worn by conscious or unconscious people.

If more than 15 minutes protection is required then another hood can be given to each wearer. They do not provide oxygen but temporarily filter toxic smoke to make breathing easier.

Picture: a photograph looking up at a reflection of the Relay Building in Aldgate Tower from Whitechapel High Street. Image Credit: © Robert Lamb (Via the following license cc-by-sa/2.0)