Almost No Room at the Inn 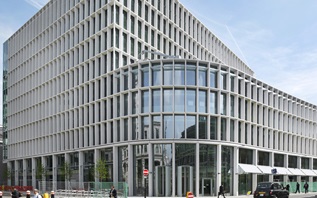 The first of the lettings is the Commonwealth Bank of Australia will move its European headquarters to 44,000sqft on the first and second floors at One New Ludgate on a 15-year lease.

Meanwhile, international law firm Ropes & Gray which signed a 20-year lease for 45,000sqft at One New Ludgate last year, will now take a further 13,000sqft on the building’s fifth floor.

The third letting is to global sales and marketing consultancy, ZS Associates International which has signed on 13,000sqft on the eighth floor of One New Ludgate.

“With its resilient and well-engineered office space, refreshing mix of new shops, restaurants and public space at ground level, and excellent connectivity, New Ludgate is a great place for these three companies to do business,” said a delighted Kaela Fenn-Smith, Head of Commercial, Land Securities. “We look forward to welcoming them all to the building when they start moving in later this year.”

Straight on for Zig Zag

In the latest of new tenants for the prestigious Zig Zag Building in Victoria, Land Securities has let the fifth floor to moneycorp. The 10-year income lease to...