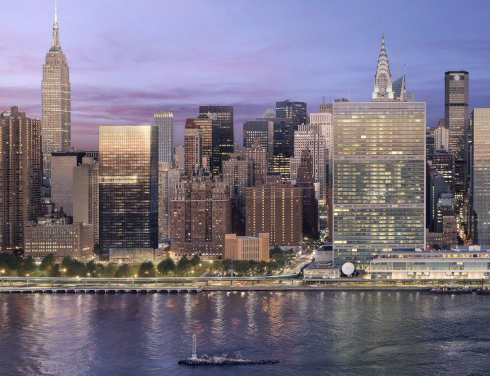 The 42-story, 460-foot high residential tower, Meier’s tallest in New York City, will rise just south of the United Nations Headquarters in Manhattan overlooking the East River. The 685 First Avenue site occupies a 32,365 SF parcel between East 39th and East 40th Streets along the West side of First Avenue.

It will be home to 556 rental and condominium apartments and feature panoramic views of the river and the city.

Minimalistic in form, the design of this predominantly glass building relies on the curtain wall incised with modular subdivisions and articulated with selective metal panel elements in the form of balconies, canopies and corners.

A distinguishing feature - an architectural cut-out at the 27th and 28th floors - will be visible from across the East River. “This is a milestone project for us, as our first all-black glass and metal panel building, the tallest tower in New York City by our firm and a complete Richard Meier & Partners project including both architecture and interiors,” said Dukho Yeon, design partner-in-charge at Meiers. “The black glass curtain wall is a departure from our trademark white palette.

“When this intriguing challenge was proposed by developer Sheldon Solow, we accepted it with curiosity. We approach all our designs thoughtfully and with an open mind and with this project we have remained true to our fundamental principles - distinctiveness in scale, proportion, light and power."

Rinnai now offer comprehensive service plans for all new and existing sites, starting from as little as ÂŁ25 per month. Click Image To Read More

Tapering the Furlough Scheme â€“ What Support is Available for Employers?

The Coronavirus Job Retention Scheme (CJRS) allows employers to furlough employees and have 80 per cent of employeesâ€™ salary costs covered.Â  What happens as the support tapers off? Click Image To Read More