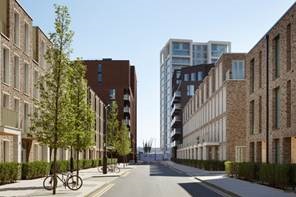 Some 16 specialists, including Peter Massini of the Greater London Authority, Dusty Gedge, president of the European Federation of Green Roof and Wall Associations, and Dan Cook, chief executive of The Landscape Institute, will discuss how to establish more green spaces in urban areas.

Among the key themes explored at the event will be the health and wellbeing benefits of Green Infrastructure, Blue-Green roof design and passive irrigation.

The free event takes place at the Institution of Civil Engineers in Westminster. It is open to all built environment and water management professionals (it is being staged by Polypipe the water and drainage company).

Rosie Cheetham of Polypipe said: “Rapid urbanisation over the last century has come at the expense of biodiversity and clean air in many urban and rural areas. The effects are exacerbated by the increasing regularity of flooding incidents caused by climate change.

“This event will enable the built environment and water management industries to combine their expertise and discuss ways to make a real impact in the UK’s increasing urban landscape.

“We encourage anyone working in these sectors to join us to learn more about the benefits of Green Infrastructure, why it is so vital and how we can work together to improve UK living standards by transforming grey places in green spaces.”

Figures released by the Office of National Statistics in February revealed a staggering 83% - 45 million - of people in England live in urban areas.

Polypipe specification director Sean Robinson said: “Policy makers, urban planners and architects are fully aware of the need to change the way rainwater is managed in urban environments. For generations, the wisdom was to manage water away from buildings as efficiently as possible to minimise long-term damage.

“However, with mass urbanisation set to continue and cities contributing to a rise in localised temperatures, there needs to be a change in mind set so that we can harness the water as a resource to keep our cities cool, by keeping them green.”

Royal Wharf, Ballymore & Oxley’s flagship development in London’s Royal Docks, will join the capital’s finest architectural plans, projects and minds as part of the annual London Festival of Architecture on the evening of June 26.

Taking place between 6:30pm and 9:00pm, guests will experience a comprehensive tour of the 3,385 homes scheme, led by Glenn Howells of Glenn Howells Architects. This will be followed by presentations from Alex Ely of Mae Architects and Chris Lee of Serie Architects. Each will explain how understanding the history of the site and the wider context of London’s ‘great estates’ have shaped the development’s architectural identity.

Part of the Royal Docks regeneration area, Royal Wharf is steeped in history. The 19th century witnessed the area’s transformation from riverside marshland to world leading port. This heritage is reflected in the design of the scheme, with industrial materials used throughout. In addition, Park View Place, designed by Mae Architects, incorporates scalloped details in testament to the oyster shells discovered in the excavation of the dock walls.

The tour ends at the Marketing Suite designed by HAL Architects. The elegant, minimal box in dark metal and glass offers sweeping views of Greenwich Peninsula and the Thames Barrier. After the presentations drinks will be served.